the booted child
by Douglas Messerli

Rosetta begins with a huffy trudge down halls and a stairwell by the film’s hero, a young teenage woman. Rosetta (Emilie Dequenne) who has apparently just been fried from her job, a few days before the end of her training period. She is certain that someone has lied to her boss concerning her persistent lateness. Her employer coldly dismisses her, but she refuses to leave, locking herself eventually into a room before the police are called to boot her out of the building. 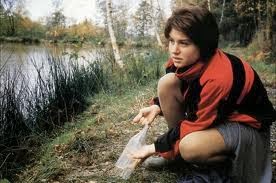 Soon after, the Dardenne brother’s hand-held camera nervously follows her determined journey home, with a detour to an empty woodland where she has hidden boots and now hides her shoes. She knows that if she has anything of value, it must be protected. For at home—a dilapidated trailer—her poverty stricken mother will do almost anything to get another drink, including prostituting herself. The young girl refuses to accept anything received from her mother’s male friends, including much-needed food, and returns to the woods to catch some fish for dinner from the nearby muddied stream. To bring in extra income Rosetta is forced to sell old clothing.
Playing both mother and wage-earner, accordingly, Rosetta most definitely needs a job. But as she goes on the search, she, at the bottom of economic scale as a basically uneducated and underaged girl, is told no again and again. Is it any wonder that she suffers from an intense stomach ache, most likely a serious ulcer? As she falls asleep, this terrified youngster prays in the only way she knows how in her godless world: in dialogue with herself. “Your name is Rosetta. My name is Rosetta. You found a job. I found a job. You’ve got a friend. I’ve got a friend. You have a normal life. I have a normal life. You won’t fall in a rut. I won’t fall in a rut. Good night. Good night.”

But as the directors make clear, Rosetta’s life is anything but normal, and she has fallen into a kind of rut, marching back and forth, from street to camping ground as if it were a military maneuver, in search of something that might give meaning—a job, a friend, whatever. In her switch from boots to shoes, repeated several times throughout the film, her very movements speak of her dogged obstinacy to survive.  Other than her fish, her diet, apparently, consists of Belgian waffles.

She does, finally, make a friend of sorts: an equally young waffle maker, Riquet (Fabrizio Rongione), who has taken a job that she might have had. She has become so self-willed and suspicious of others, however, that she hardly speaks to him. In fact, we soon perceive, she has so few opportunities for joy—she does not even know to dance—that she does not truly comprehend love and kindness. Rosetta joins him for a chaste night in his ramshackle “apartment” only after a knock-down battle with her mother, who refuses to go to center where she might be cured, even temporarily, from her alcoholism.
But soon after, when Riquet accidentally falls into the muddy river near Rosetta’s trailer, she refuses to help him back to shore until he is about to drown. She had wished him dead, she later admits. For then she might have given his job. When she discovers that he is selling his own waffles under the counter, so to speak, she betrays him, telling his boss and taking over his position. 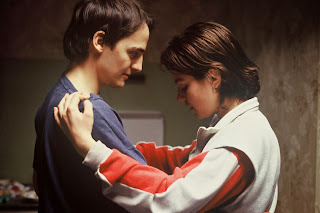 She is a good worker, but at the end of the day, after being chased down by Riquet, she again finds her mother dead drunk outside their trailer. The exhaustion of helping her into bed finally defeats her. She calls her boss to report that she will not be returning to the waffle stand. Lugging a propane tank to the manager’s office, she pays for a refill with the goal, we suspect, of blowing up her mother and self in their beds.

For the first time in the film, Rosetta cannot bear her heavy burden, as Riquet, having returned on motorcycle, circles her in a taunt. Like Robert Bresson’s young Mouchette, Rosetta finally breaks down into tears, having apparently lost her strong-willed self-identity.
At that very moment, miraculously, Riquet’s taunt turns to forgiveness and love, as puts out his hand to help her up. At last this tormented young woman has a true friend, someone who may help her to survive.
Without sentimentality—Rosetta, at times, is anything but likeable—the Dardennes, in this moving film, have created a major figure, an almost mute scapegoat forced to bear the sins of her surrounding society. Like so many of their maimed children and young adults of the Dardenne’s films, Rosetta’s life is redeemed through love. Through their work, moreover, art did truly change the world, as the Belgium child-labor laws were revised.