The plot of John Huston’s Key Largo might be described, basically, as a series of coincidental events that work toward getting the major characters and actors together in one or two rooms. A hotel, owned by James Temple (Lionel Barrymore, with pants pulled up over his belly) and run by his daughter-in-law, Nora Temple (Lauren Bacall), has been “occupied”—in both the ordinary and military meaning of that word—by gangster Johnny Rocco (Edward G. Robinson), his moll, Gayle Dawn (Claire Trevor), and his cronies and thugs, “Curly” Hoff (Thomas Gomez), “Toots” Bass (Harry Lewis), and Ralph (William Hade). Into this tense situation walks Major Frank McCloud, by accident choosing this very moment to share his war-time memories with the Temples, and a Deputy Sheriff, Clyde Sawyer (John Rodney). While passions and violence simmer inside the oppressively hot Key Largo hotel, outside a hurricane begins to bluster, drawing the local Seminole Indians and two escaped Indian prisoners, John and Tom Osceola, to the hotel doors. Obviously, now that the cast has all come together, the tough talk can now begin and the fireworks set off. 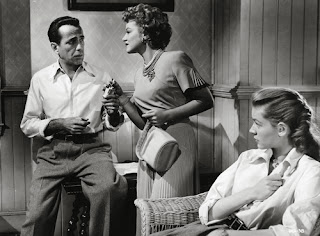 Based on a poeticized play by old-time wordsmith Maxwell Anderson, the highly revised script by Richard Books and John Huston, takes on various groups of actors, one by one, accommodating each of their demands, needs, and emotions with Huston’s camera dutifully following. What they say is fairly stereotypical, with Bogart, once again, playing the disillusioned idealist, Robinson, the loud-mouthed gangster, Barrymore the fearless liberal, Bacall the quiet and needy would-be lover, and Trevor a drunken and abused ex-singer. The others serve as variations and oppositions to these types.
Given the stagey gimmickry of this wooden play, it is almost a wonder that it remains watchable today. The acting, obviously, is what sets it apart from the hundreds of Petrified Forest imitations filmed over the decades. Like his Rick of Casablanca Bogart as McCloud, at first bowing out of any heroism, ultimately becomes the hero by killing all of the bad guys one by one on boat in which they are trying to escape to Cuba. The Bacall character, despite having hardly any lines, gets her man. Barrymore gets a chance to strut his stentorian voice, and Trevor to slur her words. Most of the others also die. It is almost as if we are witnessing an audition for various character types. But then, these are not just ordinary actors, and that’s what makes this work, at times, crackle with energy and radiant delight. Perhaps because we do know these actors so well and get to watch them here so play to type, the movie, amazingly, comes alive. Robinson has been better elsewhere, sputtering out his ego-driven evil, Bacall has been far more sexy and clever (it is no accident, surely, that the misogynist Huston hardly knows what to make of her), and Bogart has certainly been more self-assured in his pretend-cynicism as he attempts to cover over his own heroic past, but the chemistry that comes from having them all in one room, at moments, is as exciting as the footage of the furious storm stolen from the Ronald Reagan melodrama, Night unto Night. 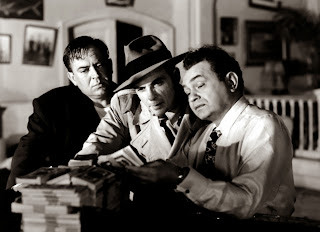 And then, out of the blue, so to speak, Trevor/Gaye Dawn is asked to sing one of her old torch songs. She refuses to do so without a drink, but Robinson barks out another command. Slowly and unsurely, the actress begins “’Moanin’ Low” a cappella, in a voice that might once have been fairly sweet. Legend has it that Trevor believed the song would be dubbed, and kept asking Huston to rehearse it, he assuring her there was still plenty of time before the shoot. One day, however, he announced that it was time for the song, and demanded that she perform it on the spot. If the song begins all right, the tune soon goes off key, slows down, falters, and breaks off. It was a take! Bogart, a gun pointed at his heart, goes to the bar, pours out a drink and offers it to her: “You deserve this.” Trevor won an Oscar for Supporting Actress for what one might describe Huston’s mean trick!
Still, I’ll surely watch Key Largo next time it flickers across the television set.