Larrissa Shepitko’s 1977 film, The Ascent begins with the punctuated crack of gun fire between a group of Russian partisans and a Nazi death squad, and ends in a mad cackle of laughter by one of the work’s major figures. In between Shepitko paints a terribly bleak but visually beautiful landscape of woods and snow of Belorusia.
Having run out of food and the energy to move forward, the men, women, and children of the partisan unit send two of their best soldiers—the powerfully athletic Rybak (Vladimir Gostyukhin) and the crack artillery officer, Sotnikov (Boris Plotnikov)—on a voyage to a nearby farm to bring back food. Rybak leads, while the slightly sickly Sotnikov follows. They reach the farm—where, evidently, Rybak had once been hidden and made love to the farmer’s daughter—only to find it burned to the ground, obviously destroyed by a German unit. Accordingly, the two are forced to walk through the brutal landscape to a nearby town, where they encounter an elderly headman (Sergei Yakovlev) who they perceive as a Nazi collaborationist. They kill a lamb, but leave the traitor to live. 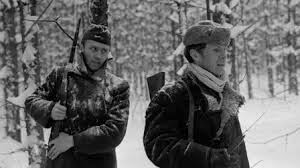 As they attempt to make their way back to the woods where their unit awaits them, they are again spotted by a roving German unit. Rybak, despite his burden of the lamb, makes it to the woods, but the weaker Sotnikov is shot and wounded in his leg. Trapped in the open, he attempts to shoot the approaching Germans, but finally, points the gun at himself, so that if they come to get him, they cannot capture him alive.
At the last moment, Rybak returns and in a stunningly dramatic tussle with body and nature, pulls Sotnikov to safety. The director follows this with a long scene in which Rybak—about to leave the near frozen Sotnikov in order to find a place of safety— reveals, through tender hugs and kisses, his brotherly love for his fellow soldier, promising to return for him. This beautiful scene is both chaste and slightly homoerotic, an astounding mixture of pure human love that is seldom expressed in such a genre. 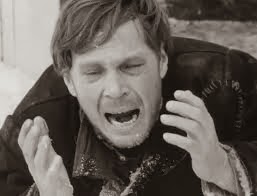 Rybak spots a small cabin nearby and drags his friend into it. But there, suddenly, they discover three small children waiting for the return of their mother. When the mother, Demchikha (Lyudmila Polyakova) returns she is angry and defensive for their intrusion, fearful of the results; but when she perceives that Sotnikov is wounded, she grows more sympathetic. At almost the same moment, however, a jitney of Nazi soldiers arrives, on the lookout for the two Russian partisans. Apparently their leader has previously had sex with Demichikha and stolen her pig, as he again forces his way into the cabin. Hiding out in the attic, the Russians are forced to watch what will surely be a gang rape, until Sotnikov, who has been coughing up blood for some time, can no longer control his silence. The soldiers are discovered and, along with Demichikha are carted away, the three children left behind to starve. 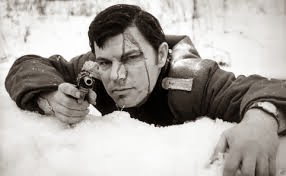 Until that moment the viewer perceives this film mostly as a well-made war story about heroism and terror. But through the delicacy of Sheptiko’s images and the intense scrutiny of her character’s faces, we sense that something else is being told in this tale. At one moment as the three are being taken away to a Nazi camp, we see Rybak jumping from the cart in an attempt to escape, only to be immediately shot. A second later the cart moves forward with Rybak still aboard. The image has, clearly, been a somewhat surrealist-like intrusion into Rybak’s thinking, a quick blink of his imagination.

And as the group, beginning with the tortured and dying Sotnikov, begin to be interrogated by a Nazi interrogator, Portnov (Anatoli Solonitsyn), we suddenly begin to see this formerly weak ex-math teacher become incredibly strong, a least with regards to his inner conscience. Refusing to reply to any of the interrogator’s question, even taunting him, Sotnikov quickly grows in stature before our eyes. If Rybak seemed to be the hero of the previous scenes, we now rethink our perceptions of this man of loyalty and faith. Despite his condition, he even endures through the torture of a branding iron in the form of a Russian star imposed across his chest. 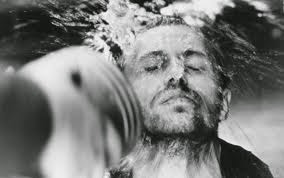 When Rybak is called to the interrogator, by contrast, he answers most of his questions straight-forwardly. Although refusing to give out information on the whereabouts of his unit, he nonetheless seems almost ready to collaborate, particularly when Portnov offers the possibility that he might make a good German policeman.
By the time the two, along with Demichikha, the elderly headman whom the two have previously encountered, and a young girl who has been in hiding, are brought together, we suddenly perceive these previously random figures, beautifully shot in frieze in the dark cellar, as an emblematic-like portrayal of figures surrounding Christ. Rybak is now determined to save his life, while Sotnikov is prepared to die. Demichikha, who we now perceive as a kind Mary Magdalene, is still furious about being taken from her children, but expresses her love of the young girl, a kind of Mary. The headman, whom we now discover was not a collaborationist, but an agent for a large partisan group stationed nearby, becomes both a Peter and a doubting Thomas in one, praying for enlightenment. Sotnikov, looking moment by moment, more like a Russian Orthodox embodiment of Christ, asks Rybak to help him live until the morning, when he will claim that he alone committed the acts of which they accuse all the others, perhaps saving his companions. The struggle with nature has been converted from a battle with the natural elements to a struggle within; if Rydak was the hero within the snowy landscape, it is Sotnikov who proves himself as the victor in the battle of his personal nature.
When morning comes, his confession does not work on the cynical Nazis, but Rybak’s acceptance of Portnov’s offer, frees him, while the others are taken out to be hung, Rybak steadying Sotnikov as he stands on the box which, when kicked away, ends his life.
The holy ones are all hung, Rybak congratulated for being a “good rabbit.” As the headman’s wife passes the Russian soldier, she hisses what we have now known for some time: “Judas, Judas, Judas.”
As the German soldiers turn to celebrate their dinner, Rybak enters an outhouse, attempting twice to hang himself by his belt. He fails.
Called in to join the others, Rybak perceives that the camp gate has been left open, the cold snow of freedom beckoning him. Might he run? He begins to laugh, painfully and madly laughing because he now knows that for him there can no longer be any freedom possible.