the disappearing giraffe
by Douglas Messerli

As some critics have pointed out, the title of this new film by Paolo Sorrentino might almost be applied to the film itself, as the director unrolls a canvas of cinematic images that quite literally makes us swoon over the landscape where the Tiber meets the Po. Indeed, this director’s film reads, at moments, almost like a sumptuous travelogue, beckoning the viewer to enter into the sway of orgiastic events the movie documents. The film begins with a quote from Louis-Ferdinand Céline’s Journey to the End of Night:

To travel is very useful, it makes the imagination work, the
rest is just delusion and pain. Our journey is entirely imaginary,
which is its strength.

Certainly, I felt that way on my visit of Rome, and by the end of The Great Beauty Sorrentino had almost convinced me that I must make that journey again—even if it is just through revisiting this spectacular film. The film’s music, alone, is worth the trip. 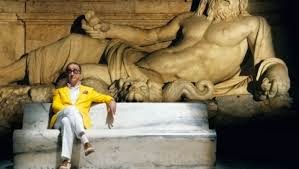 Surely the world of the film’s master of ceremony, Jep Gambardella (the incomparable Toni Servillo) is not particularly a place where I might feel comfortable, any more than I might have felt at home in the street cafés and late-night piazza strolls of Federico Fellini’s La Dolce Vita. Nor might I feel at peace in the midnight investigations of wealthy Italian mansions—despite all the beauteous art contained within—that both films present. Like Marcello Rubini of Fellini’s work, Jep works as a journalist out to enjoy the “sweet life.” But whereas Marcello is basically a tag-along in the all-night celebrations of Rome’s heathen life, Jep, born in Naples, has become the center of the parties he gives and attends, the first of which is a surrealist-like celebration of his 65th birthday. Jep ruminates:

I didn’t want to simply be a socialite, I wanted to become
the king of socialites. I didn’t just want to attend parties. I
wanted the power to make them fail.

And that is precisely what he proceeds to do throughout the many events he hosts in his grand apartment across the Coliseum and throughout his voyages around the city, destroying the pretensions of several of his guests—in one devastating scene he calmly berates one of his women guests, a writer proud of her 11 novels, the simultaneous care of her children and the connubial love of her husband. Jep points out that her books are insignificant and that she has now turned to television scripts, that she has nurses and nannies to care for her otherwise unattended children, and that her husband has been long involved in an affair. She, like everyone, he proclaims, lives a life of near-desperation. Not that he, the long-ago author of a great novel, who has never again written another work, is any better. And throughout the rest of film, the well-dressed, gracious and smiling plutocrat seeks—on the longest voyage of his life—why he has accomplished so little since. 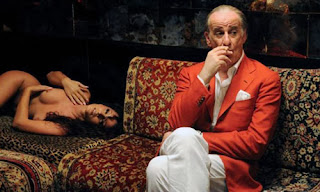 In part, it seems, his failure to again write is simply a matter of lassitude, of continued exhaustion from his Berlusconi-inspired lifestyle. Indeed, nearly all his pampered friends might be described as having abandoned themselves up to the seven-deadly sins, as each of them, one by one, suffers from the wasted motions of their wild dance of the moment. One loses her son to madness and suicide; another, Carlo, comes to perceive that he is a literary fraud and returns home to his birthplace; a third, Ramona, a posh-bar stripper, dies from an undisclosed disease (perhaps AIDS); Jep’s editor, a brilliantly cynical dwarf, has lived her life, she admits, in the position of a child. A performance artist brutally throws herself against a wall, a drop of blood trickling down her cheek A meticulously dressed neighbor, whom Jep admires throughout the work, is arrested as the country’s most famous wanted man. 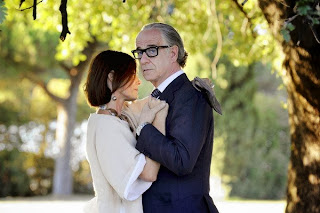 As in Fellini’s version of the fall of modern-day Rome, moreover, the church also is not exempted from this self-serving world. A priest, heir to the Papacy, can only babble on about his favorite recipes. Even the Saint of this tale, a kind of Mother Teresa-like figure, admits that, having taken the vow of poverty, she cannot speak of it but only enact: at 104 she sleeps only on floors and, in the last scenes of the film, crawls on her hand and knees in a pointlessly painful journey to the top of a long stairs. Are her acts of attrition any more meaningful, one has to wonder, than the burning and dancing sinners at Jep’s hell-bound parties. As the host declares near the end of this work, “You know what I like about the ‘train’ (the long, snaking line-dance performed by his guests). It goes nowhere!”
In the end, Jep has no major insights except, as his magic-making friend reminds him, that all actions—even that of making a giraffe suddenly disappear—are nothing but “tricks,” aspects of the imaginary world that Céline has described. Art itself, we suddenly discover, is the only way we can capture the beauty—in all of its facets—which is what, ultimately, Jep has been able to do in his “second” work, a retelling and confession of his own life, the film we have just witnessed, La grande bellezza.