the other
by Douglas Messerli

On the night of July 25, 1958 I killed Ladislaw Zukarevitch, antique
dealer, my mentor, my master in the art of polishing diamonds,
my tutor at Warsaw Theological School. I got nothing out of this
crime except the ring he offered me many times; several hundred
marks; a collection of old coins, of no value; and a long letter where
he advised me to leave the country.

—and ends in a second murder, the same student killing a sailor whom he has just met that evening. What led the Polish student (Philippe Deplanche) to murder his tutor is never explained, unless we are to interpret the “long letter” left behind to have been a warning from his tutor. We better comprehend why this violent student murders the central story-teller of Ruiz’s film, the sailor (Jean-Bernard Guillard), whose interconnected stories constitute the major action of the film.
Running from his dastardly acts, the young student meets up with the desperate sailor in a highly dangerous part of town, and, after being shot at, seeks out the older man—despite his pretended cynicism (he is an atheist, he declares, who does not believe in the “afterlife”)—primarily to buy himself some more time and possibly find a way to ship off. 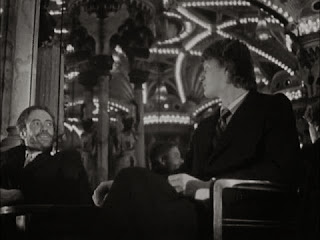 The sailor, in turn, wants something from him, three Danish crowns, which, we later learn, are demanded from him by the captain of his boat in order to spare his life. In fact, the idea of “paying back” whatever has been given to one is crucial throughout this story, as the “hero,” continually borrowing from his friends, racks up a substantial debt which comes to symbolize, of course, what he owes through the process of living. All the young boy has to do is listen to the sailor’s long story, but the young are always dismissing what they might learn (clearly he has also dismissed the lessons of his tutor), and the student of this cautionary tale seems at times to be more interested in drinking and sleeping than in attending to the sailor’s amazing stories.
Through intense close ups and a dizzying overabundance of objects and dazzlingly rich scenes, the viewer is very much put in the situation of the often stuporous student, forcing us to cling to the sailor’s narratives just to escape the panoply of often confusing images thrown out like a magic carpet before our eyes. As the reviewer from Time Out commented: Ruiz’s film is “a dream of a picture in every sense.”
It also represents a dream narrative, wherein everyone is someone other than themselves. In fact the shiftless “hero” cannot even find himself in his home town of Valparaiso, Chile. Like numerous other young men in the city, he has no job nor meaning in his life, and spends of his days just wandering the streets or dinking in a local bar—until he meets up one day with a man appropriately called “the blindman” who tells him of arrival of a ship on which he might get passage. But even the blindman, not truly blind, warns him not believe him, giving the younger man the money to pay for the drinks so that others will believe he has paid for them. The two drink together throughout the afternoon. But soon after, the blindman is discovered near death on a pier, refusing, as he dies, to even recognize his own blood: “someone has painted me red!” Soon after our “hero” meets up with an older sailor who begins to tell him his tale, but just as suddenly disappears from sight, the younger man suddenly realizing his has been wandering the streets talking to himself. Yet moments later he comes across the very boat which the blindman has named, goes aboard, and, even without experience, is welcomed to join the crew. 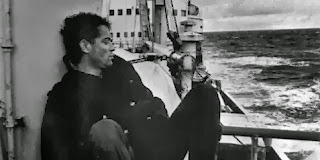 A quick trip home to pack his duffel results in sad farewells from his family and an impromptu party given in his honor, in which his sister’s fiancé—now the family’s only possible breadwinner—begs the soon-to-be sailor to remember him. A beautiful woman called “the princess” arrives to dance the last dance with him, suggesting that it is good he is leaving because if he had stayed he might have fallen in love with her and committed suicide. She is, she proclaims, determined to never marry, and is responsible for of her lover’s deaths.
So begins a series of stories, some interlinking, some oddly placed in this storybook narrative, but all colorful (the present of the film is shot in black-and-white, but the adventures are in lurid color) and narratively quirky. It would be pointless to describe all of these tales, some of which are nearly indescribable in any event. The wonder of this film is seeing them played out on the screen. But we do, ultimately, perceive links. 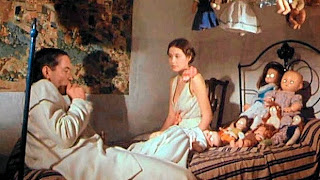 One of these important linkings is a search for family. Throughout his adventures the sailor visits ports where he uncovers the family relationships he has left behind. In one city, visiting a brothel, he meets up with an innocent young girl who lives in a room filled with dolls and a small coffin in which she keeps all her worldly possessions. He comes to perceive her as a kind of sister, borrowing money from sailor friends in order to allow her to leave the brothel.

In Singapore, he happens upon a young boy, whom he is told is actually a wise elderly man, 90 or older, who every time he eats grows younger. Consequently, the now child hardly dares to consume any food. Overcome by a paternal feeling, the sailor again borrows money to put the child into a safe home.
In Tangiers he and a woman friend are attacked and threatened by two-would be robbers, with knives held to their throats. In his attempt to escape the assailants, the sailor is arrested along with the thieves and imprisoned. In jail the two thieves and he gradually develop a deep friendship, becoming like brothers to him. They eventually escape by killing a priest to gives them daily theology lessons, insisting that the guards open the jails to the door as he speaks. The murder, quite obviously, resembles the one with which the film has begun.
Finally returning home to Valparaiso, the sailor discovers his previous family has all died, after hearing of his return and death through an automobile accident the day before. Everything, including the entrance to the house has been turned upside-down.

While in Valparaiso, he also again comes across the former “princess,” now a nearly nude performer, Mathilde (played by American body-builder Lisa Lyon), performing in a local nightclub. Making an appointment to meet her the next day, he hopes for a sexual encounter. Greeting him, the beautiful Mathilde gradually strips, pulling away her clothing, her nipples, her hair, and all else to reveal herself as a transgender being having, as she proclaims, only one orifice. Evidently, the sex he enjoys with her is so intense that he becomes obsessed with the figure he now perceives as his “wife.”

In the end, the sailor again “borrows” money to establish a restaurant in Lisbon, inviting his new family to join him, but Ruiz’s camera scan of them shows that, apparently, there will be no cohesiveness between them. The only connections lie in the sailor’s mind.
A second major thread of these narratives is the idea of “otherness,” as the sailors all refer to our “hero” as the “other,” from the beginning warning him not to become to befriend them too closely in danger of trading places. Although these men eat and drink like normal beings, there is a great deal strange about them, as he perceives them intimately showing off their tattoos to one another—tattoos that are all “letters.” He, himself, is assigned a letter by the ship’s captain: N, representing perhaps a kind of “Nth position,” or “anything,” a “neuter,” a “nothing.” The captain of the ship, who constantly sings Beethoven’s “Ode to Joy,” will allow no salt on board, although we all know it to be necessary for animal life. Nor do his shipmates, despite their constant consumption of food, ever defecate. Worms crawl out of their feet, arms, and chests. They are, quite obviously, dead, and the ship in which travels is a “ship of the dead.” As the other, we can presume, he is the only living being on board.
When we connect the sailors’ “letters” with the letter left by the tutor for the young Polish student—a statement, in short, of the boy’s destination, the course of his life—we cannot but perceive that the young, inattentive student is now, himself, an “other,” a person separated from the talkative sailor and his new-found family. The handsome boy is also a kind of neuter, a nothing who will have to be punished for his ignorance through a life of hard living.
As the sailor finishes his tale and the two drunkenly move out of the lit-up dance hall in which the story has been told, the young man pays his three Danish crowns, found by him in the hands to the dead tutor, the antique dealer. He now seeks his reward in being signed on to the sailor’s ship, but the sailor suggests that he hasn’t yet earned the right.
Just as the sailor and his friends have killed their “tutor,” the priest, so too does the student turn on the sailor, grabbing a club and brutally beating him again and again, then helping him up and even apologizing, before felling him with a final and deathly blow.
The student, having suddenly perceived the lesson of the sailor’s tale, ends this memorable movie with a statement that suggests he now knows everything: joining the crew of the ship, including the man he has just killed, he speaks: “You always need a living sailor on a shipful of dead. That man was me.”