the death of g.i. joe
by Douglas Messerli

If there were ever evidence that Roberto Rossellini was not pure documentarist and realist it is in the film often used to prove just those neo-realist credentials, Paisan. Although the film, divided into six episodes (scripted by Klaus Mann, Marcello Pagliero, Sergio Amidei, Federico Fellini, Rossellini himself, and Vasco Pratolini), certainly pretends to be a documentary, a newscaster-like voice-over describing the events of the Italian liberation by Allied troops. Beginning in south of Sicily, each of the vignettes moves gradually to the north, ending north of Florence. 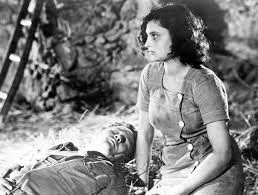 In the hands of a lesser artist, the lightly sketched episodes might have played out as a series of disconnected events, despite their connecting link of the Allied Italian Campaign. But Rossellini, working mostly with non-professional and, at times, almost illiterate actors, using the stories provided as skeletal structures with which he improvised the final script. In fact, some of these works, often shot in two languages, do not even contain significant dialogue. Particularly in the first episode, in which an American reconnaissance patrol discovers most of the citizens of a Sicilian village huddled together in a church, and take one of the town’s young girls, Carmela (Carmela Sazio) with them to help as a guide around the German minefield, there is hardly any dialogue. Discovering an abandoned castle, they leave the nearly mute Carmela behind with a young soldier, Joe (Robert Van Loon). Assigned to keep an eye on her, the young man breaks their silence by trying to explain in English his life and loneliness. A quick flick of a light, however, results in his being shot by a German sniper. Carmela tries to hide the suffering soldier before the Germans arrive. When do take over, she sneaks away from bringing them water to momentarily nurse the American, only to find he has died. One written description of the events suggests that, upon discovering his death, “She takes his rifle and starts shooting at the enemy. The Germans throw her off a cliff to her death and leave. When the Americans return, they find Joe’s body and assume Carmela killed him, but this is nearly all conjecture. Rossellini shows hardly any of this, just Joe’s body, Carmela’s lifting up of his gun, and, finally, her body upon the rocks below. The director does not fill in the gaps, but forces us to (re)imagine the events, to participate with empathy just as Carmela has presumably related to Joe. 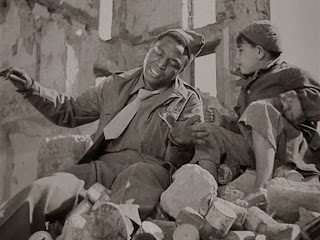 Similarly, the second wonderful episode, functions without any very coherent dialogue, as simply see a young street urchin attach himself to a very drunk Military Policeman, obviously off duty. Pulling him through the streets, protecting him from marauding police, the young boy, Pasquale, almost literally carries the large Black soldier to an isolated spot so that he might fall into the stupor of his drunkenness. Obviously, the boy intends to rob the man, and has carried him about as a trophy; but at the very last moment, he honestly tells this Joe (Dots Johnson) not to fall asleep or he will steal his shoes. The man collapses into the surrounding garbage, awakening, predictably, to find his shoes missing. The next day, while on duty, he reencounters Pasquale, scooping him up to force him to return the shoes. The child takes the MP to the place where he lives, producing a pair of shoes, which, unfortunately, are not the soldier’s. Chasing the boy into the cave-like structure where he lives, the soldier is suddenly met with a squalid horde of children and women, living nearly like animals. Joe says nothing, but merely turns and leaves; yet we know, again through an implied empathy necessary to comprehend Paisan that the American has highly moved by what he has seen. 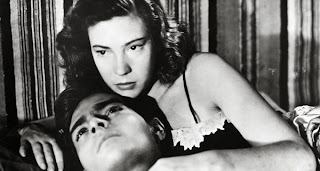 A drunken soldier again appears in the third vignette, picked up and pulled home, this time, not by a young boy, but by a street walker. But by this time the moniker of G.I. Joe has taken on a new meaning, a more personal reality. Like the Joe of the previous story, this soldier, Fred, wants nothing more than sleep, bitterly retelling the whore his story of his for a woman, Francesca, to whom, when his unit moves forward, he promises to return. In fact, we soon perceive—again primarily through subtle implications—that the whore is, in fact, Francesca, grandly changed by her street life. When he falls asleep, she leaves him, but slips a piece of paper into the hands of the building manager, telling her to give to Fred when he wakes up; we perceive it is her home address. But thinking it is merely the address of another whorehouse, Fred tosses the piece of paper into the street.
The first three stories, accordingly, share similar themes: relationships between people who cannot completely understand one another’s language or conditions of life. Any love, sexual or communal is destroyed, in short, by the vast differences between them, including language and their living conditions. 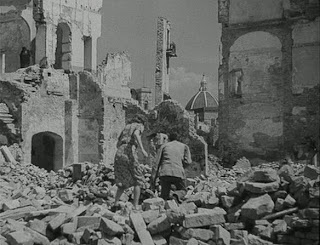 As the soldiers and axillary forces move northward, however, communication between the different cultures improves, but without yet protecting them from separation and possible death. In Part 4, an American nurse (Harriet Medin) has fallen in love with a painter, only to discover that he is now “Lupo” the leader of the partisans, trapped on the other side of the river. The only way to rich the other side is to cross through the lower walk-way under the Ponte Vecchio, which for some reason the Germans have not yet discovered. Joined by another partisan, Massimo (Renzo Avanzo), desperate to reunite with his family, the two risk their lives to reach safety on the other side, where the nurse discovers, almost accidentally, that her Lupo has been killed.
Three American chaplins seek a meal and safety in a liberated Roman Catholic monastery, in the 5th episode, written by Rossellini himself. The monks great the Americans with great friendliness, but when they discover that two of the three are not Catholics, but a Protestant and a Jew, they fast while the others eat in hopes that God will grant the erring soldiers the vision that they must convert. Although outwardly, this may appear to be the lightest of the episodes in tone, it is, actually, its darkest in the sense that the “saved” are willing to give up their lives—at least symbolically—in order to convert those outside their faith, a behavior that clearly parallels the demands of the very cultures who are at war. Again, the director says little; and, in fact, these figures all seem to communicate—at least linguistically—quite well, but there are still vast spaces that cannot breach the differences between the two.
The final episode is the closest in spirit to a simple wartime story, as, near the very end of the War, three OSS soldiers are working with Italian partisans behind German lines. Although they rescue two downed British airman, they run out of ammunition and are captured by the enemy; the next day, one by one, the partisans are executed, while two of the soldiers who try to interfere with the German’s actions, are brutally shot to death. Just as the two cultures—Italian and American—have finally seemingly come together, they are destroyed by yet another culture unwilling to offer any of the empathy required for the survival of life.
In short, Rossellini’s film may seem, somewhat, like a series of unconnected “portraits” of war-time behavior, but, in fact, they are very highly linked by his unstated theme. Certainly, this director never preaches, never outwardly manipulates or sentimentalizes these stories in order to please of influence his audience; yet as critics have pointed out, we very much know where he morally stands. At the heart of all of these fables is a devastating separation between individuals and cultures. In his cryptic telling of these stories, the gaps between images, and the silences of the inability to communicate, he encourages his audience to “participate,” to come out of their shells of parochial values in order to comprehend and love one another, not just as nameless Joes, but as individualized and true compatriots, friends.
Los Angeles, December 4, 2013
Posted by greenintegerblog at 3:25 PM