leaving something behind
by Douglas Messerli 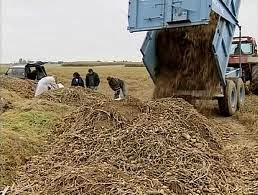 Part documentary, travelogue, personal meditation, a lecture on ethics, art exhibition, a series of interviews, and, at moments, simply a silly pastiche of film clips, Agnès Varda’s The Gleaners and I is nearly always entertaining and moving. Like its very subject, the act of gleaning, Varda’s film presents itself as a series of shots that come together as a kind of collection, drawing on images in various locations in France and even, for a few moments, pictures from the director’s trip to Japan. And in that sense, we can also perceive this work as a kind of demonstration of how a filmmaker—at least this filmmaker—puts together a movie.
Beginning with Jean François Millet’s painting of the same name, Varda, mostly alone, sometimes with a small crew, sets out to discover whether there are still gleaners today. Do people still gather up the wheat and crops left behind after a harvest? Although some former women gleaners—it was once an activity exclusive to women—claim that such behavior is a thing of the past, we soon discover that large groups of men and women, including poor farmers, gypsies, and urban dwellers, still do gather up potatoes, cabbages, figs, apples, and grapes (although such activity in the grape fields is sometimes policed), along whatever else they find left to rot. In cities, the poor and sometimes ethically-minded individuals gather at the food markets as they close each day to grab up the numerous tossed leftovers.
Others, as we know, even in the US, are dumpster divers, mulling through the trash near grocery stores and restaurants to pick out still edible foods. At one such spot, Varda gathers together several street teens, a store manager who has sprayed his dumpster with bleach, and a judge who has sentenced the teens for vandalizing both store and dumpster after it was sprayed, trying to explain to each the problems with their behavior. The teens needed the free food, the store manager was outraged by the damage they did, and the judge was simply following the law, each presenting reality from their own viewpoints only.
In the wine country in Provence we meet a vintner, Jean Laplanche, who encourages gleaners to follow the grape harvesters, gathering up whatever is left behind. The kindly Laplanche, we soon discover, is also a psychoanalyst concentrating on theory.
Back in Paris Varda meets with an ethically-minded young man who gathers food from dumpsters and markets simply to make a point of the society’s waste. Elsewhere, an award-winning chef explains that he uses every part of the animal, including bones for stock, and gleans his own herbs for the tables. 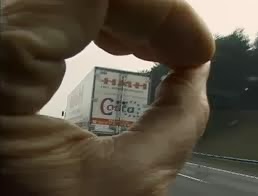 Meanwhile, the film incorporates the filmmaker herself as an aging woman with a fascination with trucks (she frames them again and again through her wrinkled hands as if they themselves were a camera lens), art (she visits several museums to view other paintings of gleaners, and talks with artists, such as Louis Pons, who use found objects in their art), and animals. So do we gradually gather up various aspects and collect information on the director herself.
In a small town she speaks to a man who collects small objects and furniture abandoned on the streets (the town provides a map and dates when such furniture can be left). And Varda, ultimately, gives us views of her own various “collections.” 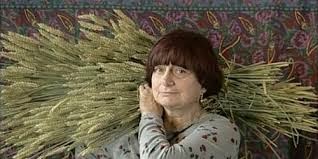 At another point, the director devotes a short episode to the “dance” of an attached camera lens which she has accidentally filmed on her hand-held camera, representing, I suppose, another kind of “found” art.
Surely one of the most touching episodes in this picaresque of picking things up, is Varda’s encounter with a young man at the market who gathers up discarded vegetables, munching on many of them as he moves around. In a conversation with him, she discovers that he has a Master’s Degree and was a university assistant, but now cannot find a job. In the suburban charity house in which he lives, he is surrounded mostly by African and Asian migrants, whom, for free, he teaches French every evening. If there was ever an example of ethical behavior, this man most clearly expresses it. 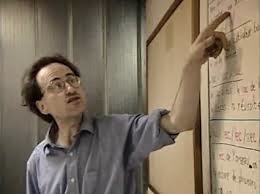 And so too does Varda in her unbiased conversations with the people with whom she meets. Her open humor and her obvious wonderment of the individuals she encounters bring to her pastiche a warmth that, without sentimentality or self-congratulation, sometimes brings tears to the eyes. This film is a non-judgmental work on people who survive or make their living on gathering up what others have left behind. Somewhat like maggots putting a corpse to good use, the “gleaners” are only too happy to take away what so much of the society wastes.
Although I saw this film in early 2014—in connection with a Varda retrospective at the Los Angeles Museum of Art—I suddenly realized that it captured the very essence of what I had titled the volume about the year 2000, in which the film was made—another example, surely, of the coincidences that have defined my life.