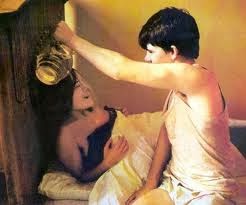 Emir Kusturica’s first film, Do You Remember Dolly Bell?, primarily takes place in a Sarajevo cultural club and in the poor home of its central character, Dino (Slavko Štimac), a teenager with many of the concerns of teenage boys everywhere (talking about girls, covertly smoking, watching movies, and bragging) and a special interest in what he perceives as acts of magic, particularly hypnosis, which he believes will help him to take hold of a life over which he has little control.
His father (Slobodan Aligrudić), who dreams of universal Communism, attends Marxist meetings, returning home drunk to hold late-night family assemblies where each of his four children are asked to admit (a bit like Roman Catholic confession) his daily sins, as Dino’s younger brother, takes notes. Misquoting and clearly misinterpreting Marx, the elder criticizes Dino’s obsession with hypnosis and his fascination with the Italian movies shown at the club.
Dino, meanwhile, is basically a good boy who, in his romantic infatuations—particularly with the movie-star stripper, Dolly Bell—does not separate film and fiction from life, hanging out with equally confused boys and making friends with a local pimp. Since school is closed for the summer, the boys have little else to do. 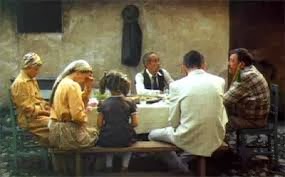 But the adults in this tale are little more than children themselves. At a luncheon at his uncle and aunts house, his father and uncle argue over politics, while the boys, Dino and his older brother, wrestle in the background. The picnic ends suddenly as the youngest son accidently overtips the table with a bicycle and the rain, which these figures proclaim is always on the Sarajevo horizon, sends them inside. Only the father stubbornly remains, as if reminding himself of his everyday fate. Soon after, his discovers he is dying from lung cancer, and near the end of this film, dies. When the women, in Muslim tradition move his body from the bed to the floor, posting his head in the direction of Mecca, the uncle orders him to be returned to the bed: “He was a Communist!” he shouts!
Indeed, although the characters of the world live, at times, rich and warm lives, they also are all thwarted through poverty and Bosnian-Serbian life. The newspapers are filled with disinformation, and absurdly unsound environmental proclamations which argue for a purposeful melting of the polar caps and a complete elimination of the Indian Ocean, resulting, they argue, in an eternally “fresh summer.” Is it any wonder that Dino repeats, again and again, his magic phrase “Every day, in every way I’m getting better and better,” as if in its repetition his life might be suddenly improved?
Two things happen, however, in this summer of 1960 that truly do change his life, transforming it into something close to art. The authorities at the cultural club become determined to create a band, buying instruments and attempting to engage the help of Dino and his friends, while Dino’s pimp “friend,” asks him to hide a prostitute (Ljiljana Blagojević, whom, after the Italian film, the pimp has named Dolly Bell) in their barn. 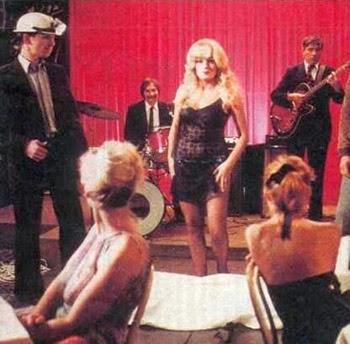 The band takes shape slowly, while the relationship between Dino and the young woman develops quite quickly, as the knowledgeable beauty encourages the young boy’s attentions. After some tame rough-housing—both poor pitchers of water over one another’s head, symbolizing, presumably, a kind of baptism and purification—begin to engage in sex, only to have the pimp return, punishing his “property” by forcing all of Dino’s friends to have sex with her as well, again (like his father) leaving Dino alone out in the rain with tears pouring from his eyes. Later, Dino, dressing in a bright, white suit coat, takes in Dolly’s show, paying the fee for a true sexual encounter with her. Again the pimp returns, but this time Dino fights back, losing the battle, of course, but proud of his bruises, having now something truly to brag about.
By film’s end, the band has finally taken shape, singing one the only songs they know, Adriano Celentano's "24 Mila Baci,” the large audience dancing in the cultural club. Love and art have finally won out over the bleak daily blows of Communist life.
Yes, there is something predictable and sentimental at times about Kusturica’s wry film, but through its many images of the family just eating, sleeping, smoking, and arguing, Do You Remember Dolly Bell? fondly calls up a richly treasured past in a city that would later become a vicious killing ground.