Bernardino Zapponi and Brunello Rondi (loosely based on the work by Petronius), Federico Fellini (director) Fellini Satyricon (Satyricon) / 1969, USA 1970
Loosely-based on the Menippean satire by the Roman writer Petronius, Fellini Satyricon seems to be the movie the great Italian director always wanted to make, or let us just say that all his films previous to this one seem to be summed up in what Fellini himself described as a “science fiction of the past.” When one recalls the open sexuality of nearly all of Fellini’s works, the vague science fiction theme in 8 ½ (whose final scene takes place near a huge space-rocket launching pad), and the extreme and bizarre beings of many of his films, particularly Juliet of the Spirits (which like Satyricon features a hermaphrodite), one might see this beautiful fantasia as a summation of the director’s career. 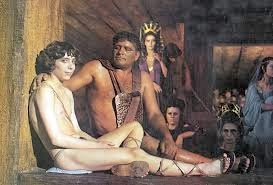 Fellini’s films seldom present a straight-forward story, relying as they do on travelogue (Nights of Cabiria, La Dolce Vita, and 8 ½) and picaresque (Nights of Cabiria and Juliet of the Spirits), but in his 1969 film—given the fragmentary and pedantic qualities of the original (at the heart of Petronius’ form are a series of pedants)—Fellini jettisoned plot entirely, taking the viewer through a series of unconnected encounters with two central characters, Encolpio and Ascilto, and various other figures, including both mens’ beloved Gitone. 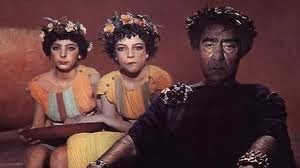 Throughout Fellini’s film-making, woman have always been portrayed as innocent waifs, glamorous temptresses, or as misshapen hags, and if one reads these images as psychological we can suppose that, at heart, the director was quite misogynistic. But in Satyricon, in which Fellini seems to have moved to the borderline between dream and imagination, allowing nearly all of personal archetypes to come into being, the director, strangely, has created a male-centered world, where nearly all women are ugly monsters and heterosexual love is represented as perverse or debilitating. The figures at the center of the story, on the other hand, are beautiful homosexuals (Martin Potter and Hiram Keller) or bisexual boys (such as Max Born). The major
storytellers of this work (the satire’s pedants), Eumolpo (Salvo Randone), Trimalcione (Mario Romagnoli), and Lichas (Alain Cuny) divide their sexual time between their wives and young men or boys: Trimalcione turning to two boys the moment his wife begins to dance, Lichas actually going so far as marry Encolpio, and Eumolpo rewarding the spirit of poetry to Encolpio. Women such as Scintilla and Enotea are terrifying monsters. Even the beautiful femalae African slave left behind in the emperor’s villa is allowed sex with Encolpio only by joining in a threesome that includes Ascilto. As Parker Tyler summarized the film when it first appeared: “It is the most profoundly homosexual movie in all of history.”

Saytricon is also a film about art, not only in its own overstated artistry—few movies have been so brilliantly framed, the costumes so shimmeringly beautiful, and actors’ faces so lovely or grotesque—but in its presentation of and references to theater, mime, poetry, and spectacle. The scene with Eumolpo begins in an ancient art museum, and the film ends abruptly with a presentation of frescoes of the characters we have just observed in action.
At the heart of Fellini’s Satyricon, however, is neither love nor art, but death. For all its bawdy couplings, stolen kisses, and hidden embraces, the film is as Giovanni Grazzanti described it:

It is evident that Fellini, finding in these ancient personages the
projection of his own human and artistic doubts, is led to wonder
if the universal and eternal condition of man is actually summed
up in the frenzied realization of the transience of life which
passes like a shadow. These ancient Romans who spend their
days in revelry, ravaged by debauchery, are really an
unhappy race searching desperately to exorcise their fear of death.

And in its highly fragmented passages, in its purposeful disjunction of speech and image (Fellini deliberately dubbed the dialogue to make it appear the actor’s voices and lips were out of sync) and in its Brechtian theatrical distancing, Fellini has created a grand momento mori. To emphasize this, the film ends in mid-sentence as the destination of Encolpio’s newest voyage looms up in the vision of an island. Even if he has found a new safe-haven, however, he is now alone, without his beloved Gitone or his long-time companion, forced to live a life, quite obviously, that has turned to stone the frescoes represent. 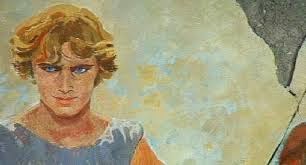