François Truffaut’s Shoot the Piano Player is so many things that it is difficult to know where to begin in describing it. Charlie Kohler (Charles Aznavour) is a down-and-out wreck of a human being, playing a kind of hurdy-gurdy sounding jazz piano in a French dive, where prostitutes flirt with customers as they dance. One of the local prostitutes, Clarisse (Michèle Mercier), also a neighbor, offers her services to the sad-sack Charlie for free. Charlie’s true love, however, is the bar’s waitress, Léna (Marie DuBois), with whom he soon shyly develops a relationship. Accordingly, it appears, on the surface at least, that the film is a kind of sad love story.

But in the very first scenes, Truffaut’s film, we realize, is also something else: a man races down streets, trying to outrun a car in which sits two mobsters out to kill him. The man, Chico (Albert Rémy), the name reminding us of Chico Marx, is Charlie’s brother, a small-time gangster who works with another of Charlie’s siblings, Richard (Jean-Jacques Aslanian). Chico escapes his pursuers only to collide with a streetlamp. He is helped up by a passing stranger as the two briefly discuss women and marriage. 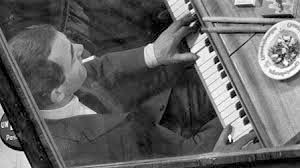 When Chico appears at the bar where Charlie works, the piano-player is suddenly involved in the so-called “family business,” and is also threatened by the chasing mobsters; and so too, through their association with Charlie, are Léna and Charlie’s younger brother, Fido, who lives with him. Much of the rest of the movie plays out as a gangster story.

On top of this, Truffaut also layers another genre, introducing a comic singer in the bar, Bobby Lapointe, whose bawdy lyrics are sung so quickly that they become hard to understand in French, that Truffaut comically reproduced them in writing replete with a bouncing ball. Later, when the mobsters kidnap Fido, the boy outwits their antic Keystone Kops behavior, reminding one almost of the O. Henry story “The Ransom of Red Chief.” And throughout this film, the director stirs up his Mulligan Stew with large doses of farce.
Truffaut salts these elements with long and shorter disquisitions on the nature of women, both by the course-minded mobsters and Charlie himself: “Once you have met one you have met them all,” as well as New Wave-like discussions on other subjects, suggesting that the film might shift into the realm of a dialogue, which was so central to Godard’s Breathless of the same year. 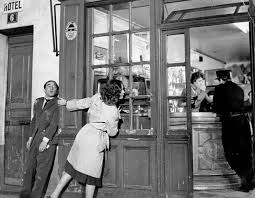 And if that weren’t enough, the center of this film is told in the form of a flashback where we discover that the piano-player was once a noted concert pianist by the name of Edouard Saroyan (a reference to the wistful American writer William Saroyan?) who was married to yet another waitress, Thérèse (Nicole Berger), who helped forge her husband’s career by sleeping with his impresario manager. When she admits the affair, Charlie leaves her; she leaps from their apartment window to her death. Later Charlie himself, in a fight with the owner of the bar, accidentally stabs his former employer, killing him. And in the final “shootout” with the two mobsters, his current love, Léna is shot and killed. Suicide and murder are, accordingly, added to this love/gangster/farce.

In the end, as Charlie returns to his lowly job and another waitress is visually introduced, the attentive viewer doesn’t quite know whether to cry or laugh. Certainly, by all accounts, this strange concoction of genres should have been a mess! And many critics of the day portrayed it as one.  Variety described the script as “meandering,” and New York Times critic Bosley Crowther suggested that the film “did not hold together.” Dwight MacDonald argued the mixtures of genres “didn’t gel,” and even Truffaut’s close friend, Jacques Rivette, described Charlie as “a bastard.” 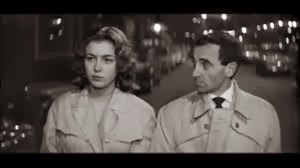 Yet for all that, over time Shoot the Piano Player has held up as a lovingly energetic valentine of American grade B-movies. I’d go even farther by describing it as a loving tribute to American culture at large. Loosely based on a novel by American writer David Goodis, Down There, this film is a kind of là-bas (“over there” or “down-there”) view of the warring contradictions—at least from a Frenchman’s view—of US life, where “over there” is perhaps also a kind of hell—but nonetheless kinetic world that in its very diversity breaks with the bonds of the past.
Truffaut himself saw the film as a purposeful attempt “to break the linear narrative and make a film where all the scenes would please me. I shot without any other criteria.” The result is an energetic, at times almost frenetic fantasia, a work that is a-jumble—as life often is—with comedy, tragedy, and ridiculous melodrama. Charlie’s world, like Chaplin’s world, is one in which the ordinary clown of everyday life is doomed to fall over and over, who yet, like a Beckettian figure, miraculously goes on, rising again to perform, to enact his lowly art. Yes, Charlie is a bastard, a fool, a lousy lover; but he is also a dreamer, a romancer who might have been a Casanova if he’d only had a break.
Los Angeles, January 25, 2014
Reprinted from International Cinema Review (January 2014).

Posted by greenintegerblog at 2:27 PM