Hirokazu Kore-eda’s 2013 film, Like Father, Like Son, seems, at first to be suggesting a deep resemblance between the film’s central “father,” Ryota (Masaharu Fukuyama) and his 6-year old son, Keita. Indeed in the very first scene, the wide-eyed child—New York Times critic Manohla Dargis described him as having “enormous, startled-looking eyes”—placed squarely between Ryota and Keita’s mother Midorino (Machiko Ono), appears, in his black, loosely chopped hair and serious attentiveness, to be a piece with both parents, as he is intensely queried by a series of adults in what we later grasp is an interview for entrance to a wealthy private school. The child, coached by his “cram” teacher, states that his father takes him camping in the summer. 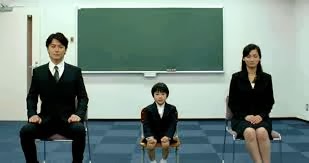 But as we, soon after, enter the Nonomiya household, a beautiful apartment in a high-rise Toyko building, we quickly perceive that Ryota’s closeness to his son is a lie. The well-to-do architect is unsuccessful as a family man, and his relationship to Keita consists, primarily, of forcing the child to study hard, to learn to play the piano, and other cultural activities that give the boy little time to imagine or play with toys. The love Keita receives comes mostly from his doting mother.

Although Kore-eda’s work slowly builds up to the reasons for Ryota’s distance, the plot of his film shifts suddenly and radically early on when the couple suddenly receive a visit from hospital authorities, where their child was born. Requesting that the couple receive a DNA scan, the insensitive hospital representatives suggest that there may have been error at the time of Keita’s birth, and that he has been mixed up with another child born the same day, Ryusei (Shogen Hwang). Indeed tests confirm their suspicions, and suddenly the seemingly happy, but already tense family is forced to consider an exchange with the other family, Yukari (Yoko Maki) and Yudai (Lily Franky). The Saiki family could not be more different than the Nonomiyas, the former of which live in small quarters shared with their not very successful appliance store. The father of three children, Saiki clearly prefers parenting to working, and spends long hours with his children, his wife reaffirming his somewhat childlike philosophy. Unlike the cautious, worried Kieta, Ryusei is a rambunctious kid who loves his little brother and sister, flies kites with his father, and spends long hours with his toys, which Saiki magically repairs when they break.
With great tension, the two couples meet on several occasions, the boys getting along remarkably well, “like they were brothers,” while the parents eye one another suspiciously. As well they should, since it quickly becomes apparent that to save them all from a Solomonic decision, that the wealthier off Ryota hopes to take both boys into his family. The loving Saikis are understandably outraged by his presumptions that they might give up their beloved son.
A court trial reveals that a nurse, vaguely responding to a grudge with her own husband and children, has purposely switched the two children, which creates even greater rancor for the two sets of parents. On this subject the film is intentionally unclear, and we never do quite comprehend the nurse’s motives, but the facts merely throw salt into the parents’ wounds. 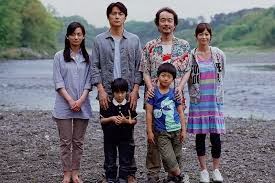 Gradually, the two mothers, both terrified of the prospect of giving up the children they have nurtured for so many years, bond, while the men, reiterating their differences, continue to try to find a way to manipulate one another. Ryota attempts to negotiate the slippery slope between nature (the ties of blood) and nurturing, while Saiki outwardly criticizes Ryota for not spending more time with his family. All of this becomes even more fraught, as they attempt to “trade” children during the weekends, testing both the parents’ and the childrens’ abilities to accommodate the new realities. At first the boys take to the experiments as a kind of adventure, although Ryota, once again, describing the exchange as a “mission” to his son, has taken away some of the fun. Certainly, it might be said that Keita has more “fun” at the Saiki house than at home. Ryusei, on the other hand, is scolded for the way in which he holds his chopsticks, and is forced to “the study” the problem by picking up plastic letters with the chopstick as he baths.
The hospital representatives have argued that, generally, when such situations occurred, the parents decided to “exchange” children. And after a visit to Ryota’s own father, who argues that as time passes each of the children will grow to look more and more like their birth-parents, suddenly convinces Ryota, despite his wife’s protests, that a permanent exchange is the best decision.
Meanwhile, both mothers become tormented with the losses in their life. The relationship between Ryota and Midorino becomes increasingly more tense, as he, so she feels, blames her for not recognizing that Keita was not their son at birth, and blames himself for not having perceived the “obvious,” suggesting that Keita has lived up to the father’s own abilities. The visit to his father also begins to confirm to us that Ryota hated his own father, and that the film’s title is not, necessarily, about him and Keita, but Ryota and his selfish dad.
As I suggested earlier, all of these feelings of guilt and frustration work themselves out, particularly in Ryota’s case, very slowly, with the director allowing no simple resolutions to his character’s situations. We cannot precisely know what Ryota is thinking, but we clearly see his anguish, as he, once again, attempts to escape his house, even temporarily abandoning his work. And, more than anything else, he sleeps. If he has never truly been at home in his house, he is now like a depressed being, unable to even try to explain to Keita anything about the momentous change in his life that will soon take place. Once again, he breaks the news to the boy by aligning it with responsibility, a “mission.”
Although both sets of parents attempt to welcome and love their switched children, neither boy is entirely happy with the results. Keita at least has a family who play and even bathe together, and his new father and mother lovingly try draw him out of his lonely anger with games. Ryusei, on the other hand, like Keita before, is mostly left alone to try to comprehend the vast changes in his environment. When Ryota demands that he call him and Midorino mother and father, the child can only ask, over and over, “why,” their inexplicable logic bringing the same question to his lips in something close to terror. When his toy ray-man breaks, Ryota cannot fix it, only commanding him to ask Midorino to buy him a new one.
Slowly Ryota, comprehending his own failures, tries to awaken himself from his slumbers, constructing a tent with the boy’s bedroom, the three of them pretending to camp out under the stars. For the first time in their lives, they actually “play” with their child, rushing about the apartment to shoot each other dead. But that is just the problem, the love the boy has known is “dead.” As Ryota again sleeps, Ryusei makes an escape, the small child taking a train to his family so that he might once more fly a kite.
Ryota returns to the Saiki house to pick up his “new” son, Keita hiding from the man, who as Midorino finally expresses it, has “betrayed” him. The increasing hostility between Ryota and his wife, as well as his own growing perceptions, brings him finally to tears when he accidently discovers a series of photographs Keita has unknowingly taken of him—all of them while the father was asleep. His photographs reveal an abiding love, almost an obsession, of a man-in-missing. Not only has he betrayed his son, he has seldom been there for him as a loving father. Like Ryota’s own father, he has been a selfish, unlovable man. 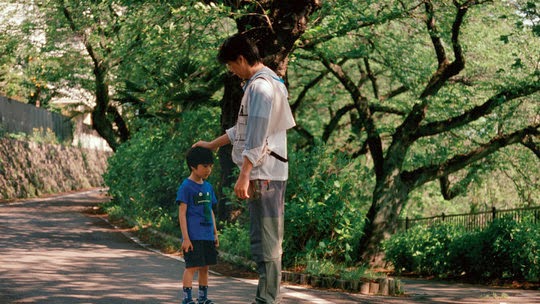 The film ends with the rightful restoration of the boys to the families who have raised them, not who have simply “blood ties.” But before they can restore that order, Keita bolts, unable to accept the love a father who has sent him on the ridiculous “mission.” Ryota runs after, the two walking along a parallel path, separated by a row of trees. Stubbornly, Keita trudges forward, his small legs moving him away from the man whom he once so trusted. Only when Ryota admits the error of his ways, admits that he too had stopped taking piano lessons as a child, that he also had run away from home, and declares “the mission” to have ended, are the two able to join each other once again. Of course, in life, such situations do not always end with such amicable revelations, and Kore-eda’s movie relies, too much perhaps, on its sentimental conclusion. But the implications of that situation are far more profound. Family is not about blood as much as it is about caring and love.

Posted by greenintegerblog at 9:36 AM