selling a pen
by Douglas Messerli
Terence Winter (screenplay, based on the book by Jordan Belfort), Martin Scorsese (director) The Wolf of Wall Street / 2013

As the last several essays in this volume have suggested, many of the movies I saw by coincidence and most of the movies that were released during 2013 strongly dealt with obsessions. And most the year’s major motion pictures focused on despicable people, greedy hustlers, lairs, drug addicts, and just plain socially incompetent beings. When one thinks for even a few moments about the characters presented in Blue Jasmine, The Dallas Buyer’s Club, Nebraska, American Hustle, August: Osage County, and Inside Llewyn Davis, not to forget 12 Years a Slave and Her, one has to wonder what has happened to American heroism or just plain normality. And then there were the foreign-language films such as I’m So Excited and The Great Beauty! What are we to make of the characters these films present? Do they resemble us? Even if we might perceive that what is often described as “normality” is equally as dangerous and false, what are we to make of the values and motivations of these mostly immoral and failed human beings? It often seemed as if in 2013 the cultural world was presenting us with absurdly camp versions of our more ordinary lives. 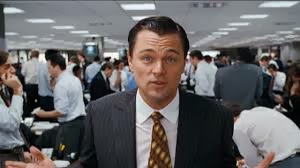 The most extreme of these was Martin Scorsese’s The Wolf of Wall Street, based on the life of a being representing all the qualities I list above. Scorsese’s film is a work of excess, presenting a world in which its central figure, Jordan Belfort (Leonardo DiCaprio) lives a life of obsessive excess, trying, so it seems, daily to top the “over the top” day previous, transforming simple fraud into million-dollar hustles, taking drugs from inhalation of cocaine, to crack meth and powerful Quaaludes that allow no bodily movement, moving from sexual copulation to mass orgies in which the writhing figures stuff every orifice in sight. Simple wealth is not enough; like endlessly consuming monsters Jordan and his fellow associates—Donnie Azoff (Jonah Hill), Mann Riskin (Jan Favreu), and Nicky “Rugrat” Koskoff (P.J. Byrne), along with all of his workers—fiendishly consume everything in sight, from palatial Long Island mansions, to yachts, helicopters, beautiful women, servants—anything they can swallow up! 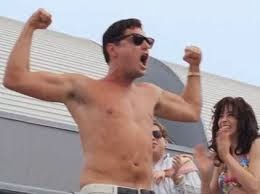 But Scorsese’s film is, alas, not simply about excess, it is a film of excess. Playing for three hours, Scorsese not only captures the frenetic pace of Belfort and his colleagues’ wild drug-leaden celebrations, but is itself swept up with them. Time and again, Scorsese tells his story only to repeat it, sometimes in order to adjust the reality of his narrators’ drug-confused stories, but at other times just to cinematically show us what we have already been told—as if, we too, like his characters, could not comprehend the oral component of human speech.

Indeed, Scorsese’s work does not believe in what people say. How could it, when every word from its character’s mouths represents a fabrication of the truth? We never see the poor folks who are being lied to, but evidently they are the most gullible people on earth, ready to spend their life’s savings on penny stocks for companies that barely exist? The presumption is that these folk, like us, are just as “hooked” on fantasy as are the super-salesmen of Belfort’s self-created firm Stratton Oakmont. And behind that, it appears, the director supposes that we will all be similarly “hooked” on the magic of his filmmaking, buying (like Belfort’s dupes) his story simply for the rush of its American Dream-like sensuality. 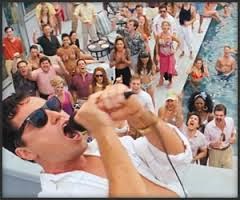 I’m sorry to report, it almost works. Such out of this world of images of the wealthy and utterly greedy are almost fascinating enough that, particularly with the charismatic nonsense of DiCaprio, and the oafishly comic blundering of his friends, one is momentarily swept up in the mess of their lives which offers something to everyone: straight, gay, transgender, or just plain nerdish. Even Belfort’s somewhat normal parents (played by Rob Reiner and Christine Ebersole) are temporarily caught up in their son’s mania. 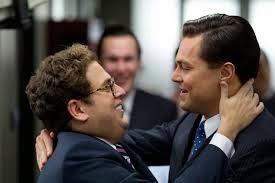 The director and DiCaprio, given their newspaper commentaries, would argue that that’s just the point, that the wildly obnoxious and destructive lifestyle of Belfort was truly empty, as opposed to the simple honesty of FBI agent Patrick Denham (Kyle Chandler), who rides the subway home instead of taking a stretch limousine. Unfortunately, in its own excessiveness, the movie really doesn’t show us that. In real life, Belfort was sentenced to only 22 months before he was back on the street, teaching other would-be hustlers how to sell a pen. His acolytes presume that in order to attract their customers to the pen they must find some special quality in the object itself. But it is the function of the thing that truly matters. Most people don’t realize that they need a pen to sign away their lives—or an unthinking afternoon at the movies to abandon their own consciences.