passing by
by Douglas Messerli 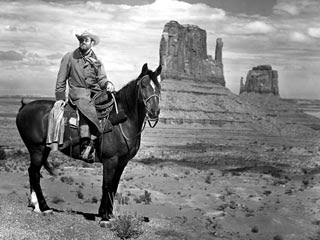 I had good memories of John Ford’s 1946 film about the shoot-out at the O.K. Corral, yet, watching it again yesterday, it almost caught be by surprise in its intense character studies and the hundreds of details the director inserted into this basically simple tale about a man seeking revenge, Wyatt Earp (wonderfully portrayed by Henry Fonda), for the death of his young brother, Virgil (Tim Holt) and the rustling of the Earp’s herd of cattle by the evil Clanton family (headed by Walter Brennan).
The Tombstone of Ford’s remarkable Arizona desert landscape is a one-street affair, with what appears to be primarily saloons, a hotel, and a barbershop. Where all the church-goers live, who later suddenly appear out of nowhere, is never quite explained. But we get the idea, this is a town still in the making, a wild outpost filled with passing gamblers and cowboys, momentary travelers, native Indians, Mexicans, and even an iterant actor, Granville Thorndyke (Alan Mawbray) poised to quote Shakespeare—quite badly, but heartfelt—at the first trickle of any alcohol. Even the town’s major figure, the somewhat mysterious Doc Holliday (a mature Victor Mature), seems to come and go without explanation. The sheriff and deputies resign early in the movie, leaving the job open to Earp, who has previously, so it is suggested, brought order to another frontier town. Only the saloon singer, Chihuahua (Linda Darnell) and other chorus girls seem to be permanent Tombstone dwellers, but she also is on the move, in another manner—from man to man, bedding down with one of the Clanton boys the moment Doc leaves town. Except for those suddenly-appearing church-loving citizens in the middle of the work, no one in Tombstone seems to have permanent ties to the place.
So too does Clementine Carter (Cathy Downs) “drop in,” so to speak, on the search for her former lover, Doc. And is prepared to leave again the moment Doc makes it apparent that the man she once loved in Boston, is no longer who he is. It is only when her would-rival Chihuahua is shot, that Clementine, playing nurse to Doc’s surgeon, determines that she may stay around. And at the same moment, it appears that Wyatt may also remain in town, even when he rids the area of the evil Clantons. His dance with Clementine at the church hoedown hints at his readiness to leave the life of the range for a solid bourgeois life. 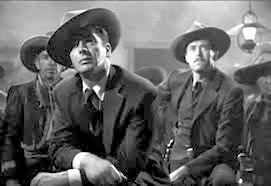 We know, however, how it will end. And despite Ford’s apparently more open ending (where we were to see Earp back at his brother’s grave, a visitation he had promised earlier in the film), the studio would have it no other way. After the inevitable shootout (this at the memorable corral) in which Doc Holliday is shot and killed before the tuberculosis from which he suffers does the job, Earp leaves town—although hinting that he may be back to look in on Clementine. 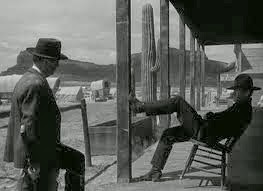 Not until High Noon could a Western hero be the “marrying kind” (and even in that work the hero almost loses his wife). While Earp seems smitten by Clementine, the central relationship of the film is between Doc and Wyatt, the latter of whom even comments, upon his first glimpse of Doc, that Holliday is a handsome man. Fonda, moreover, makes it clear through his laconic performance, that Earp, even if he spiffs up considerably by the end of the film, is a kind of wild loner, a man, somewhat like Doc, on the run. Both men, despite some tense moments, clearly admire one another, and Earp is particularly friendly with Doc when he discovers that the saloon-owner can also quote Hamlet. Ford, in fact, proffers up far more time for that cultural event, which the two men attend together, than with the heterosexual-bonding hoedown, making it clear that the theater-going occasion helps to forge a bond between them.
Throughout Ford’s film both men appear on the lookout—for trouble, of course—but also for something less specific. Early in the film Earp orders a crazed Indian to leave town; soon after Doc demands the same of a noted gambler. In short, without overstating the fact, Ford makes it clear that the two are similarly focused in a kind of unspoken duel, a battle of wits for an order they celebrate with Doc’s champagne (a drink seldom served up in the Westerns I’ve seen). If Doc scans his customers from the bar, Earp daily scans the street, sitting, memorably, on a precariously balanced chair in front of the hotel. Without implying that there is any sexual in the act—he is, after all, on the lookout for the arrival of the Clantons—one might almost describe the act as “cruising,” checking out the people who pass through town, each day growing more and more like a well-trimmed and perfumed dandy, a fact that Ford uses to comic effect when people, describing various pleasant smells, are answered by Earp: “That’s me.” 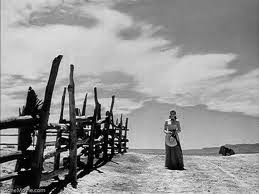 With Doc’s death, accordingly, there is really no reason for Earp to remain in Tombstone, despite his attraction to Clem. And she remains for him, as the song “My Darling Clementine” suggests, a kind of temporary distraction, a beautiful someone to be left in distance.

While in the 1946 release version of the film, that song swells up loudly to become almost a hymn of love and devotion, in Ford’s original (the version I watched this time around) that song and others were played at a low pitch, sometimes just suggesting rather than emphatically reiterating Clementine’s existence. The result is that the film remains much more quiet and ruminative, much more open to suggestion, than a straight-out statement. Love, heroism, and almost everything else in Tombstone is ephemeral and unpredictable. Only death, where Ford wanted to end his great picture, is certain.