the pebble’s purpose
by Douglas Messerli

Yes, Fellini’s La Strada, at moments, is highly sentimental, using stereotypes instead of developed characters, and employing symbols to stand-in for a credible story! With this movie, moreover, Fellini declared his rupture with Italian neo-realism—at least the kind of neo-realism that demanded the ideological political and anti-religious perspectives. Indeed, along with Roberto Rossellini and, soon after, Michelangelo Antonioni, Fellini helped to destroy it! How the Marxist critics hated what they saw as Fellini’s betrayal. 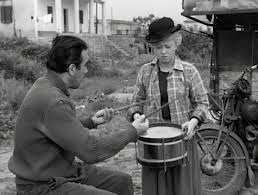 Fellini himself has described the filming of this seemingly simple story as nearly impossible, resulting near the end of the shoot in a complete nervous breakdown. Actor Anthony Quinn remembers it as a bone-wearying experience (“He drove me mercilessly, making me do scene after scene over and over again until he got what he wanted.”), but, Quinn continues “I learned more about film acting in three months with Fellini than I’d learned in all the movies I’d made before.” Fellini’s wife, Giulietta Masina (as Gelsomina) complained that the director was being particularly mean to her during its shoot. And there are moments, finally, when—as marvelous as she is playing the slightly retarded naïf—Masina, as Roger Ebert notes, is a shade to conscious and knowing, playing to her audience. 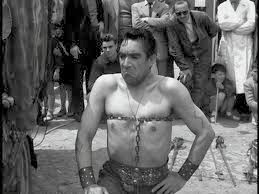 Yet for all this, La Strada is simply radiant in its look, subject, and portrayal of deviant love. From the very first moment of this film, when the small-time circus performer, Zampanò (Quinn), returns to Gelsomina’s mother, reporting that the daughter he has previously bought from her, Rosa, has died, and purchases the second daughter for 10,000 lire, we know such a cruel transaction can lead to no good for the young woman. But the very thought that she might be of any value to anyone excites her, as she merrily joins the brutal strongman on what will be a voyage into death. Zampanò, true to his appearance, rapes, whips, and psychologically maltreats her as he leaves her waiting for his return home (a perfectly ridiculous cart hooked up to a motorcycle) from his dalliances with other women. Yet gradually Gelsomina does learn, not only to beat the drum while announcing “the Great Zampanò,” and, after the performance to pass the hat; but to play a comic in the absurdly badly acted sketch which begins by the strongman describing his rifle as a “fifle.” She even learns to play the trumpet.
What she also learns, however, is just how painful life can be, behaving a bit like Fellini’s later high-spirited prostitute in another of his “road” movies, Nights of Cabiria. And she not only learns from Zampanò, but from a passing nun that life, even an itinerant life, can contain great joy and nobility. From the tight-rope-walking fool, Il Matto (a wonderful Richard Baseheart), she discovers that she might be a credible performer and, more importantly, that she does have a  purpose in living, even if it is the role of a pebble, in her “husband’s” life.
The Fool, however, cannot resist taunting Zampanò, calling him “fifle,” and mocking the strongman’s greatest accomplishment: his ability, through flexing his abdominal muscles, to break a link of chains in which he has been wrapped. When Gelsomina is asked to also perform in Il Matto’s act, Zampanò grows wild, chasing the Fool with the intention of killing, an act that results with both performers in jail—Gelsomina waiting outside the prison. 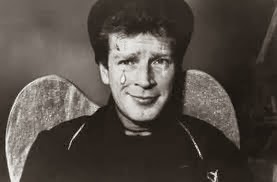 Even when she attempts to speak up for herself, arguing that her servitude to Zampanò is unconscionable, ultimately leaving him for a period, she  is still blindly attracted to another kind of a circus, in the form of a religious procession of a small town’s patron saint,  forced to join up with her brutish “husband” once again. Only when, after encountering the Fool once more on the road—this time with the result of Zampanò’s beating and accidently killing him—is Gelsomina completely transformed from a passive clown to a figure of conscience, even if her new-found moral being carries with it an aspect of insanity. Unable to cope with her insistent reminder that he is now a killer along with being a brute, Zampanò leaves her once more along the roadside as she sleeps, this time forever.
We later discover that Gelsomina is found along a beach, eventually wasting away and dying. Hearing of the story from a woman whose father has taken Gelsomina in, Zampanò gets drunk and wanders to the nearby beach, where he breaks down in despair for having lost the woman to whom he could never acknowledge, even to himself, he loved.
If Fellini’s work is a simple playing out of body, soul, and mind (Zampanò, Gelsomina, and Il Motto) it is also a profound statement about the Postwar world which the film portrays, a bleak landscape in which the souls and minds of the body politic have been clearly ravaged by the brute force of Italian Fascism. The tawdry circuses Fellini reveals of weak—if sometimes charming—imitations of more serious entertainments such as literature, cinema, and drama, remind us of Juvenal’s satiric statement “Two things only the people anxiously desire—bread and circuses. For Fellini, it is clear, the circus of life is a merely a coarser version of the vast mythic fantasies conjured up by the imagination—particularly his own. The very straightforward emblematic approach of La Strada is an early, provincial exploration, of the grand orgiastic entertainments he will later role out before our eyes in the Roman landscapes of La Dolce Vita, 8 ½, and Fellini Satryricon. If I prefer the later works over this gently personal remembrance, it is only that they represent elegantly deft fantasias that the characters of La Strada might never even have imagined. But then, it would hard for any of us to imagine the gifts Fellini left us when he became determined to go “full throttle.”  How can a pebble, no matter how useful, match the whole of Italian society—as Fellini portrayed it—gone berserk?