Peter Ustinov (screenplay, based on the play by Louis O. Coxe and Robert Chapman, based on an early version of the novel by Herman Melville) Peter Ustinov (director) Billy Budd / 1962

Premiering in 1962, the same year, coincidentally, when Harrison Hayward and Merton M. Sealts, Jr. published the most authoritative of editions of the novel, Peter Ustinov’s version of Billy Budd, just like Benjamin Britten’s noted opera, cannot be perceived as a definitive presentation of Melville’s great book. But it is about as good of a version possible, beautifully filmed in black-and-white, and essentially well-acted.

Certainly one cannot imagine a better actor to play Billy than the cherubically beautiful young Terence Stamp, who has such a glowing smile that Ustinov’s camera quite literally fawns on him; and although the film does not overstate (or even overtly suggest) that “the handsome young sailor” may have aroused homosexual longings in both the repressed master-at-arms, John Claggart (a frowningly brutal Robert Ryan) or the slightly pompous and orthodox Captain Vere (Peter Ustinov), it is not difficult to imagine why Billy, impressed on board the Indomitable through “the Rights of War,” despite the harsh cynicism of the seasoned crewmen, including the older Dansker (Melvyn Douglas), quickly makes friends with all except Claggart, charming them with his wave of the hands and naïf grin; he’s a natural charmer, and in those very actions, perhaps, suggests that in this world of near-thugs, the beautiful Billy is a slightly effeminate being. Given his stunning face and psychical stature, it is hardly incidental that such an “eye-candy” as Stamp would later go on to play a multi-sexual Christ-like being in Pasolini’s Teorama and, later still, an aging drag queen in The Adventures of Priscilla, Queen of the Desert.

Not only is he lovely to look at, but, even more powerfully, totally innocent, refusing, even though he has had his “rights” taken away—he has been snatched off the merchant ship The Rights of Man—to recognize the evil of the world into which he has been suddenly immersed. With absolute positivism, he describes the sickening gruel which the sailors are forced to eat: “It’s hot. And there’s a lot of it. I like everything about it except the flavor.” And we know that from the beginning such a ridiculously gifted being will not/cannot survive in the violent and vindictive world in which he has suddenly found himself. Despite the warnings of the wise Dansker, Billy cannot resist speaking to the sinister Claggart about the floggings he has ordered and simple wrongness of that vision of life. “It’s wrong to flog a man. It’s against his being a man,” he simply asserts, while Claggart—whom Melville and this film never quite explain the roots of his sadistic nature—proclaims: “The sea is calm you said. Peaceful. Calm above, but below a world of gliding monsters preying on their fellows. Murderers, all of them. Only the strongest teeth survive. And who’s to tell me it’s any different here on board, or yonder on dry land?” The problem is that Billy, just through his actions, eloquently argues against that very view. 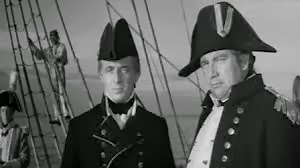 Captain Vere, himself, perceives the ugliness of his Master-of-arms,” behavior. But he is too weak, and far too conflicted to take his subordinate to task. In an early review of the film, New York Times critic Bosely Crowther argued that Ustinov’s acting “is a little too petulant and soft for the full effect of this character, which must represent rigid rectitude.” But to me, that is precisely the qualities in Vere that allow the terrible incidents aboard his ship to recur, ending, obviously, in Budd’s hanging. Terrified of the recent mutinies aboard other ships, Vere believes in an iron-fist approach to the class so clearly beneath him, the sailors, even though he perceives his own position and, particularly, the sciocopathetic behavior of Claggart as wrong. And in that inability to bring reality into focus, he is a failed leader, a Pontius Pilate unable to perceive his own ineptitude, always ready to give into the unjust laws governing the behaviors of men in service at sea, “resigning freedom” for the larger cause of war-time behavior—all of which makes this story even more prescient given the current spying and other personal intrusions of our own government after the attacks of 9/11 and our war-time brutality in Iraq and Afghanistan. Vere, despite Billy’s forgiveness of the man (“God bless Captain Vere!”), is a weak leader, who like too many of our recent leaders believes control is more important than empathy, a position which can only end in self-destruction of both his world and his own being. In this 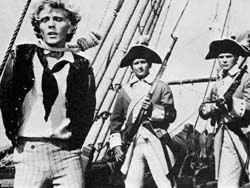 version of Melville’s tale, the French win out over the English, not because of their sailor’s lack of resolution, but the English leader’s lack of humanity. The Indomitable clearly is not what it pretends to be, any more than the systems it advocates can possibly survive. It is Budd, obviously, the root of a new and different society, who survives in this tale, despite his hanging. The old order, at film’s end, dies, Vere along with Claggert, destroyed by their own attempts to protect themselves at the expense of all others.
If there was ever an example in American literature of Kierkegaard’s call for a “leap into faith,” Billy Budd expresses it again and again, clinging to the top foremast with a bow, a wave, and smile—an agile angel doomed by what lies below him.

At the University of Wisconsin, Madison, I took a course with Billy Budd scholar Merton M. Sealts. It was, if I remember correctly, a course in late 19th-century, early 20th century American fiction. Although I can now no longer remember any of the books we studied in that course—it was, after all, in the late 1960s, when I was only 20 or 21—I am sure Billy Budd was among them!
Posted by greenintegerblog at 8:03 AM