Vincente Minnelli | Cabin in the Sky

How you perceive the merits of the all-Black 1940s musical Cabin in the Sky may depend, in part, whether you are an optimist or a pessimist; is this cinematic “glass” half full or half empty? Certainly one might applaud MGM for even deigning to put money in the early 1940s in an all-Black motion picture. Most movie theaters in the South would not even show films that featured Black actors. Although the musical had not necessarily fared well on the Broadway stage, its lovely score by Harold Arlen and witty lyrics by the brilliant John La Touche received high praise, to say nothing of the lovely and down-to-earth singing and performance of Ethel Waters as Petunia Jackson—who also played the role in the film—and Katherine Dunham’s performance as Georgia Brown, brilliantly resurrected in the movie by the incomparable Lena Horne. Although Eddie “Rochester” Anderson brings to the role of “Little Joe” too much of his slow-shuffling, wide-eyed servant antics of The Jack Benny Show, he nonetheless does add humble humor to his picture. Louis Armstrong even makes a cameo appearance. 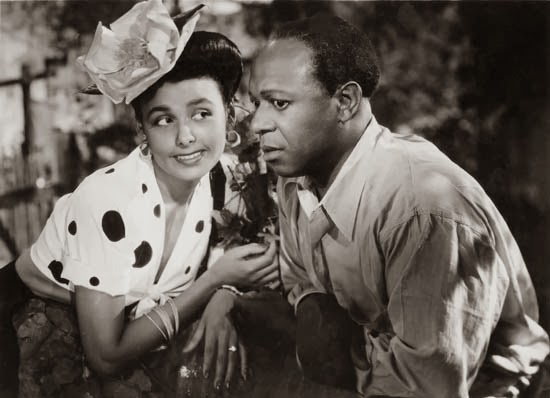 Arthur Freed at MGM, a master of producing musicals, brought in a young Vincente Minnelli, directing his feature film, who clearly brought a sense of dignity and careful framing to the work. The dancers were excellent, the sets often stunning. And author Lynn Root had edified the simple story of a gambler in danger of going straight to Hell, by imbuing it with  Faustian archetypes. Rumor has it that Freed and Minnelli both sought extensive input from Black leaders before embarking on the film.
Seeing it for third or fourth time the other afternoon, the film seemed to be much more deft and light on its feet than I had remembered it, at moments, particularly with Waters’ performances of “Taking a Chance on Love” and “Happiness Is a Thing Called Joe” (nominated for an Academy Award) soaring into the stratosphere. How I wish this once great torch singer had been able to perform in more motion pictures! She makes the art of singing seem as easy as breathing out and breathing in, her shining smile literally dazzling us as she looks the camera straight-on. I could watch her for hours.
Although the final film cut Lena Horne’s best song—“Ain’t It the Truth,” sung in a bubble bath (clearly studio heads felt that the suggesting of Black nudity was simply going too far)—her performance in the group song “Shine” is superlative.

For all of this, however, one has to admit that overall the work is still too embedded in the “old stereotypes of Negro caricature,” as actress Jean Muir proclaimed. The religiously devoted Petunia just wants the simple man she loves, living out the life something close to a poor share cropper, and she is totally unbelievable when she “dresses up” to win “Little Joe” back in a nightclub last act. “Little Joe,” as I have already suggested is just that, “little,” a kind a grown boy tempted by all the evils of the universe—the typical version of a Black male through most of the 20th century. And the world they together conjure up is filled, like so many caricatures, with little Black babies and “darkies” prepared to enter their all-Black vision of heaven—in short, a world which any white viewer would perceive as pure myth. And like the ancient Hebrew God, this Black God has an extremely personal relationship with human folk, spinning out cyclones to reward Petunia’s prayers, and allowing “Little Joe” into heaven by a technicality when Georgia Brown, in penance for her bad behavior, gives the church all her money. Such “shenanigans,” finally, hardly matter in the end, as we discover that Joe has dreamt the whole story! In short, the Blacks of the small town Cabin in the Sky are taken no more seriously than a fevered nightmare, Petunia and Joe basking in their utter poverty by film’s end. 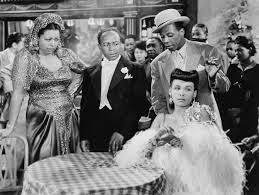 By the 1940s, moreover, even though this work gave Blacks the opportunity to strut their stuff, the kind of Paul Green-condescending piety of Green Pastures or the orgiastic dancing of Black ensembles one sees in some of the Marx Brothers films was fast disappearing, as American audiences began to be aware of international threats to individual expression, while the Harlem Renaissance had taken Black arts to new highs. A decade later Ralph Ellison would write his masterwork, Invisible Man, which—at least in literary terms—would wipe away the “happy darkie” sensibility behind Cabin in the Sky.

The saddest thing about watching this movie today is that these brilliant performers were so worth watching that we might want to cry out for the lost opportunities they had to give witness to their talents.* So much radiance and so little opportunity to represent it on screen or on stage swells my eyes into tears. Is it any wonder that the great Waters turned to fundamentalist gospel singing or that Lena Horne found herself on the Blacklist because of her close friendship with Paul Robeson?
Given that reality, perhaps we should toast with that half-full glass to Minnelli’s early achievement.

*In saying this, of course, I am not denying or dismissing the important Black film and stage traditions which early on and throughout the century, did allow these performers a segregated and separate audience, traditions which are crucial in the history of American film and theater. I am only declaring that I wish these same performers might have been more visible for the racially prejudiced white audiences as well.