The essay below was written in 2012 in connection with a series of reviews of movies based on the stories of New York author Damon Runyon, which appeared in the second volume of my Reading Films series. The news today, February 11, 2014, of the death of beloved child actor Shirley Temple led me to return to that older essay, which I found tangentially related to the notion of “nature” at the center of the year’s volume. “Adopted” by Runyonesque gangsters, the innocent “Little Miss Marker” of this work begins to describe and define herself as being a bad girl, which forces the truly “bad” adults to redeem themselves in order to convince her that goodness is truly in her “nature.”

As in Lady for a Day and Pocketful of Miracles, the Damon Runyon story on which Little Miss Marker was based centers around a bookie, a showgirl, and the various thugs and roughs associated with the New York betting gangsters. In this case, however, the central character, Sorrowful Jones (Adolphe Menjou) is simply a bookie, instead of the head boss. The showgirl, Bangles Carson (Dorothy Dell), is also a much tougher doll whose relationship to the head man, Big Steve Halloway (Charles Bickford) is more that of a kept woman as opposed to the hardworking singer-dancer, Queenie-Missouri Martin, in Capra’s films. 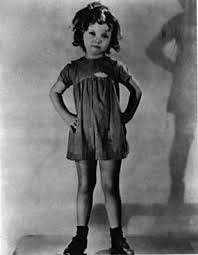 It hardly matters since the characters they play are so similar, the two leads, Sorrowful and Bangles, acting out a bickering relationship destined for the marriage altar. In this case, however, there is a third woman, the appealing child, Marthy Jane (Shirley Temple), left by a desperate gambling father as a marker for his bet on Dream Prince, a losing horse.
Once Marthy (immediately dubbed “Little Miss Marker”) enters the scene, one can feel a dense layer of sugar coat the teeth. Fortunately, the writers, Lipman, Hellman, and Lehman, along with director Hall, whipped up a story that when faced head-on tastes more like a jigger of gin thrown down the gullet. For despite the cuteness of this human marker, as Marthy cajoles, scolds, and cries in her struggle for the affections of Sorrowful, all else is delightedly perverse. We might start by examining why the stingy Sorrowful has taken her as a marker in the first place, particularly given his natural curmudgeonly contrariness. It is clear from the moment that he lifts her into his arms, ostensibly in an attempt to hand her back to her father, that he is as smitten with her as if she were a dame of his own age. Sorrowful quickly assigns her to the care of his two comic stooges, Sore Toe and Canvas Back, who remind us also of the two dumb brothers in Lady for a Day. Their hilarious interpretation of Sorrowful’s instruction to “mind” her ends in their retrieval of a barber shop sign (which she perceives as a gigantic peppermint) and result in her temporary loss.
When her father does not return to collect—we soon discover that he has killed himself—  she is found again, this time by a young Black janitor, and returned to Sorrowful at Holloway’s club just a Bangles is warbling out a song of painful feminine woe. So begins a relationship of the young girl with Sorrowful that on the surface may seem utterly cuddly and charming, ending in a complete alteration of his life, but just out of the radar of the common viewer is a tale of abduction and child endangerment that might almost be read as pedophile’s fairytale—the last word being one that is repeated throughout.* 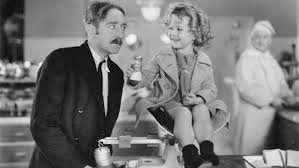 Quickly removing the big boss, Halloway, from the scene, writers and director hunker down to focus on the catfight between women, old and young, for Sorrowful’s heart. Marthy has the advantage: she’s cute and sweet and, as everyone knows, no adult actor on screen can match the appeal of a child or puppy. And who could resist Temple’s tearful pleading:

Obviously, she wins the fight and with it his heart. At the other end of the spectrum is Bangles, secretly in love with Sorrowful as well:

Both she and Sorrowful are soon as sappy as everyone in the audience, she purchasing a wardrobe of clothing for the child and, with Sorrowful, throwing a party of absurd proportions and questionable merit, with their whole underworld crew dressed like knights of the round table in the hope that they can restore the innate “niceness” of their little princess, who—influenced by their conceptions of themselves and their world—now describes herself as “a bad girl who can’t pray.” Enter her Dream Prince, a horse who they are intending to drug and, in so doing, kill the very next day. Enter also the jealous Halloway, having been clued in by Bangles’ maid of his girl’s growing attention to Sorrowful, and, suddenly, the consequences of their indecent behavior become all too obvious. The horse, who hates the boss, rears, tossing the object now of everyone’s love to the floor and into a coma.
She needs a transfusion so the doctor’s proclaim, but it has been made clear already, now verified by tests, that none of them have the right blood. Beyond all reason, it turns out, Big Steve Halloway alone has “good blood,” saving the day and reviving their stolen princess, as well as redeeming his pride and life. Now, presumably, as usually happens in Damon Runyonland, everything will turn out just swell: Sorrowful and Bangles will marry and keep their ill-gotten gains. But what are they going to tell her about her real father? Does it really matter in a world so corrupt?

*The long scene where Sorrowful seems to be making up a chair as her bed ends in the child entering his own bed. We must presume that Sorrowful sits out the night in the chair. In a later scene, Bangles falls to sleep in bed with the child. Throughout, every male character lifts and holds her in numerous manners in an attempt to guess her weight. In short, almost everyone in the film holds and embraces this self-proclaimed “bad girl.”
Director Hall, evidently, actually abused the young actor, telling Temple that her mother had been kidnapped in order to invoke her tears.