the retreat
by Douglas Messerli

Evil is everywhere in most of Lang’s films, and often those who stand for good, as in Metropolis, must undergo their own voyages through Hades before restoring any order—personal or social. Indeed not only is the society split between good and evil, but individuals themselves are bifurcated. If often these moral oppositions are played out in his films in grand mythical terms, late in his career—in what is described as the director’s American years—the same issues were presented in more realistic situations such as in The Big Heat.
A happily married cop, Dave Bannion (Glenn Ford), with his cherry wife Kathie (played by Marlon Brando’s older sister, Jocelyn) and charming daughter, at home jokes and teases. Unfortunately, this “well-lit” domestic world is constantly being interrupted by the outside world—what Lang might have described as the “real” world, but, in fact, is sui generis a noir construction controlled by racketeers the way his Spies was controlled by evil bankers.
The film begins with a kind of murder, the suicide of fellow policeman Tom Duncan. The gunshot draws his wife (Jeanette Nolan) down stairs, whereupon, instead of reacting with shock, she reads a long letter that her husband has left and makes a call, not to the police, but to a man we later recognize as the top mob boss, Mike Lagana (Alexander Scourby). Clearly, Duncan’s suicide has something to with his involvement with racketeering. Assigned the case, Bannion is convinced by Mrs. Duncan that her husband had been ill, and killed himself from the knowledge that he was dying. 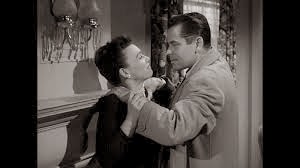 Enter the “barfly” Lucy Chapman (Dorothy Green) who tries to convince Bannion that Duncan, with whom she was having an affair, was not at all sick and was seeking a divorce from his wife. Bannion, doubtful about her story, becomes soon convinced after the police find her body, covered with cigarette burns. Another visit by Bannion to Mrs. Duncan results in his police chief’s warning him to lay off the case, a dictum that has come down from authorities above.
Bannion’s refusal to do so—as he visits Lagana during a party for the mob boss’s daughter—results a quick spiral into hell for Bannion, beginning with his wife being killed in a car explosion (very similar to the same kind of incident in Coppola’s The Godfather) and, later, a possible kidnapping of his daughter. 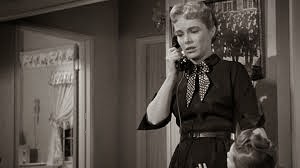 Now consumed by vengeance, Bannion quits the force, which he now realizes is being controlled by the mob, and enters the dark corridors of standard noir fair, cheap hotel rooms, slick night streets, and run-down bars (this one called The Retreat); in short he himself becomes a kind of criminal, at one point, in yet another visit to Mrs. Duncan, nearly strangling her. Her death, in fact—which would result in a release of the letter and the downfall of the mob world—will ultimately be necessary for Bannion’s redemption.
But first Bannion must battle sexual temptation in the form of Debby Marsh (Gloria Grahame)—girlfriend to one of Lagana’s henchman, Vince Stone (Lee Marvin)—who is impressed by Bannion’s threats to Stone at The Retreat. Stone, appropriately, retreats, while Debby brazenly follows after Bannion, inviting herself over to his hotel room. For a moment it appears that the now desperate and clearly haunted Bannion might give in to her sexual invitations, but when she asks about his wife, he is so overwhelmed that he backs away. Her response says it all: “Well, you’re about as romantic as a pair of handcuffs.” 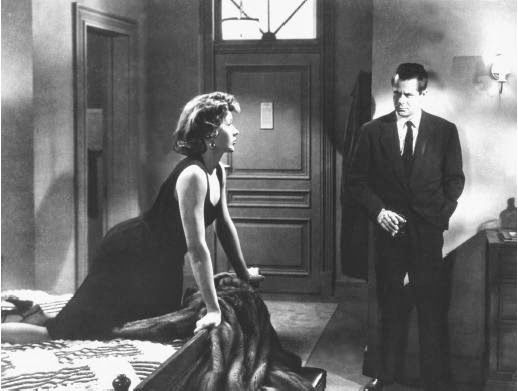 Spotted with Bannion, Debby is soon after punished by Stone, as he throws a pot of boiling coffee into her face, disfiguring half of it forever—symbolizing, once more, Lang’s perception of the dual nature of human beings, and, in particular, of Debby who, as Bannion taunts her, gets “her money from a thief.”
Escaping the hospital, Debby rejoins Bannion, telling him that it was another of Lagana’s associates, a man named Larry, who bought the dynamite that killed Bannion’s wife. With a little bit of detective work, Bannion discovers the man is Larry Gordon, forcing him to admit to his crime, and letting it be known on the streets that Gordon has squealed, resulting in that man’s death. 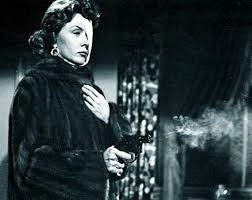 Finally, in remorse of her life, Debby visits Mrs. Duncan, suggesting that both of them are “sisters under the mink”—women willing to sell themselves in order to wear the mink coats in which they are both dressed. She kills the woman, resulting in the series of events that finally reveal the truth, that Mrs. Duncan has kept her husband’s letter, which revealed Lagana’s involvement with the police and city government—in order to blackmail Lagana for regular payments.
At film’s end Bannion is returned to the force, taking a telephone call for the beginning of another “gritty” case, a man welcomed back to the office but who, we comprehend, has perhaps “retreated” from life.
If the plot seems a little convoluted and, at times, predictable, Lang’s sharp black-and-white images are straight-to-the-point in their representation of his postlapsarian universe. And if there were any questions about his ability to work with actors, one need only see Ford and Graham in these roles compared to anything else they made, before and after. Ford, surprisingly, gives a performance that suggests what he might have been capable of if he had not fallen into the slightly tepid comedies of directors such Daniel Mann, Frank Capra, and Vicente Minnelli  in which he later acted.
There is no doubt that Lang’s world is a bleak one and, at heart, is slightly misogynistic (four of the film’s deaths are those of women), but after his encounters with Nazism in Germany—including the involvement with the Nazi party of his own wife—and his being targeted later by the HUAC committee during the “Red Scare,” how might we expect anything else? One might almost argue that Lang invented the noir genre, and The Big Heat is certainly one of that genre’s best expressions.