Gustavo Alatriste (screenplay, based on a novel by Luis Buñuel), Luis Buñuel (director) Símon del Desierto (Simon of the Desert) / 1965 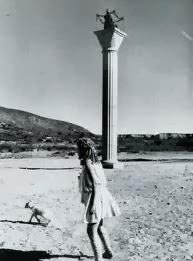 The first action of Buñuel’s short fable Simon of the Desert is a decent, as Símon (Claudio Brook)—like the Syrian saint, Símon Stylites before him—comes down from a desert pillar where, feeling in need of spiritual purification, he has stood for six years, six months, and six days. Greeted by nearby townspeople and monks, they gather round the saintly martyr to grab fragments of his filthy garment and beg him to bless them. The local head of the monastery attempts to anoint Símon into the priesthood, but the hirsute saint refuses it, arguing that he is not yet worthy.

A wealthy landowner has built another, taller pillar nearby, to the top of which Símon now climbs in search of further purification. When he has returned to the top, a man whose two hands have been amputated, begs him to perform a miracle. Símon prays, and the man’s hands are restored, but his first action is to push his child from him. So the director notes the irony of Símon’s gifts. While he may be a kind of saint, he is also shunned by most of the locals as, one by one the monk rails against them for their human sins. A dwarf goat-herder is attacked by Símon for loving his goat; a handsome young monk who brings Símon food, is attacked by the elderly martyr for being too vain, and orders him to not return to the monastery until he grows a beard. Símon rejects even the pleas of his own mother to be able to live near to him.

In short, if Símon is perceived as a saintly sufferer, he also rejected as a proud bigot, a man who himself recognizes his vanity in wishing to bless the people below. The man in the ridiculous position atop the pillar has become a kind of monument, a testament, perhaps, to his own sense of superiority and holiness. 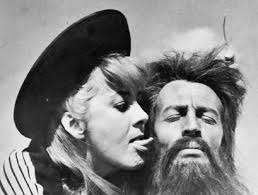 Under the sign of the devil (666) is it any wonder, accordingly, that Satan soon arrives in the form, first, of a lovely girl (Silvia Pinal), flirtatiously trying to lure Símon to come down and play with her. Símon, however, recognizes her as Satan. Satan returns, this time with a ridiculous beard and curled hair, pretending to be Christ, but again the saint, after a few minutes, recognizes the tempter to be Satan.

Possessing one of the priests who come to visit him—a priest who has secretly filled Símon’s food bag with cheese and other delicacies—Satan again makes an attempt to denounce Símon. Recognizing his deceit, Símon prays, exorcising the priest of the devil on the spot.

Finally, in a third appearance as a coffin trails across the desert sand to stop by the pillar, opening to reveal Satan once more, this time in a toga. Climbing to the top, Satan promises to end Símon’s vigil, as suddenly the couple vanish. 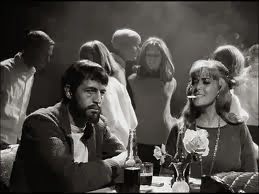 The next scene shows a shorn Símon (looking somewhat like a beatnik) next to a woman in a New York City nightclub of the 1960s, where a crowd of young dancers enthusiastically rock to the beat of a band playing Radioactive Flesh. Símon begs to leave, but Satan tells him he is damned to stay forever.

The mix of the serious religiosity of Buñuel’s story and the humor it elicits makes it clear that for all the “saint’s” suffering, he gains nothing, no vision nor loss of pride—Simon’s major sin. Satan captures him simply because Símon has become someone apart and above the people, a kind of Pharisee who demonstrates his penance so extremely, that he can no longer be embraced by those who might have loved him. And accordingly, in this wonderful short, Buñuel has turned his “life of a saint” into a warning of dangers of human nature.