Paul Wegener and Carl Boese | Der Golem, wie er in die Welt kam (The Golem, or How He Came Into the World)


the word
by Douglas Messerli

Paul Wegener and Henrik Galeen (screenplay, based on a novel by Gustav Meyrink), Paul Wegener and Carl Boese (directors) Der Golem, wie er in die Welt kam (The Golem, or How He Came Into the World / 1920

Paul Wegener’s third Golem film—the 1915 version, The Golem, and the 1917 The Golem and the Dancing Girl both lost—is a film of contradictions and oppositions, beginning with Rabbi Löw (Alan Steinruck), who, although he is a noted Rabbi, wisely able to advise the Prague Jewish Ghetto of the 16th century, is also a Cabbalist, working with magical and Devilish powers slightly beyond his control, powers which even he keeps secret from the community and family. And even though the Holy Roman Emperor Luhois (Otto Gebühr) is about to order a closing and diaspora of the city’s Jews, he himself has worked with Luhois on creating the Emperor’s horoscope. In order to protect the established community which the Prague Jews have been able to create, Löw himself convenes with the demon Astaroth, and later, in a display of noted Jewish Patriachs summons a performance from “the Wandering Jew,” Ahasuerus, which merely reiterates the condition with Luhois would place the Jewish community once again. 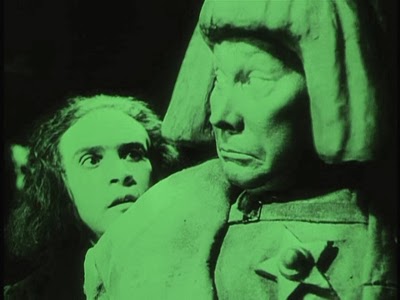 Despite his attempts to protect his community, the Rabbi creates a monster in his clay figure, calling the figure’s existence into being through the magic of the word, the “shem”—in this case the magic word “Aemaet,” the Hebrew word for the “truth.” But even “truth” in this film is a two edged sword, for the truth is that Frankenstein-like creature, The Golem, can be used for good or evil. Although Rabbi Löw attempts to use the “monster” for good by slightly threatening the Emperor and his court, the Golem returns home with more threatening personality, which the Rabbi’s cabbalist texts reveal may soon become dangerous.
Even the bearer of the Emperor’s decrees, his gap-toothed knight Florian (Lothar Müthel), represents an amazing duality: on one hand he is a dazzlingly empty and effimanaate lackey, pleased that he has even received the attentions of the Emperor, but he also falls, somewhat inexplicably in love with the Rabbi’s dark-haired daughter, Miriam (Lyda Salmonova), who herself is an would-be obedient child, at first in love with the Rabbi’s assistant, Famulus (Ernst Deutsch), but is quite quickly taken with Florian, and, secretly disobeying her father, meets with the love-stricken knight. 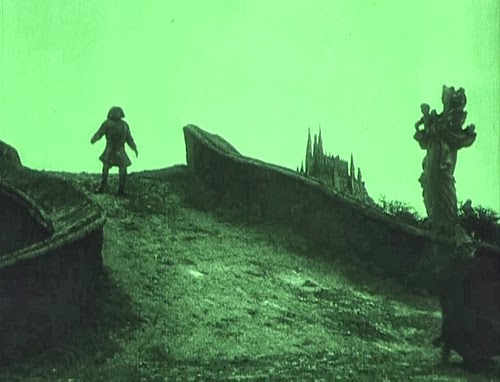 Although Famulus is also an utterly obedient assistant to the Rabbi, he also turns traitorous when he discovers that his would-be lover, Miriam and Florian have spent the night together, suddenly reanimating the monster, from whom the Rabbi has removed the magic amulet which gives him life, but placing the “word,” the monster’s animating name to the Golem’s chest in order to command him to destroy Florian.
In short, each of this film’s characters, in their duopolistic behaviors helps to destroy the very community in which they live and hope to protect. The very powers which each of them possess—magic, knowledge, sexual allure, and Godliness—are abused in order to protect their society and themselves, and in that sense, they all unknowingly work against their own values, using their traditions to help undo the very things that they believe to be positive. 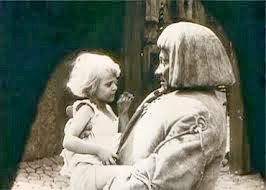 The Golem, like Mary Shelley’s Frankenstein, is, by itself, an innocent force gone mad, a product of mankind’s own failings, a reverse-Christ who comes into being not to redeem mankind but to reiterate its fall from grace.
The saviors of Wegener’s fable can never be the knowing, the adults of this world, even its would be wise men, the several patriarchs called together in beautiful ceremonial gatherings again and again in this film, but the innocents, the children whom at film’s end gather round and run from the Golem. The young girl who remains, so unknowing that she does not even understand that she should be horror and run, seems, as in Frankenstein, to momentarily enchant the monster, who picks her up into a possible hug of joy or death—we can never know what it might have meant. Simple curiosity and wonderment leads her to grab the amulet from his chest, rendering the Golem incapable of further action, returning him to a thing of clay, a being no longer with a name that might animate him. The child (Loni Nest), in her simple speechless act, has rendered “the word” meaningless, saving the world which the adults has so terribly transgressed.  In this Jewish fable, the savior becomes the continuation the species rather than a godly intercession into human life.
That this profoundly perceived work about Jewish survival was directed by Paul Wegener, who later, critics report, collaborated with Nazi supporters is yet another of the films remarkable contradictions. The filming of The Golem, with its German Expressionist flourishes, represents a high moment in German cinema to which it could never return.