the age of denial: two ibsen enemies
by Douglas Messerli

On August 22, 2013 professor of physics and astronomy Adam Frank, decried what he described as “The Age of Denial,” citing that in 1982 44% of Americans believed that “God had created human beings in their present form,” while currently 46% of Americans described themselves as “creationists.” Even back in 1989 63% of our countrymen understood that “climate change”—which was not yet perceived as a central issue by journalists—was a major problem, while today only 58% of Americans see it as anything to worry about, some of those, one might add, holding major political positions. In North Carolina, for example, state planners are banned from using data from climate studies in their projects of future sea levels, evidently only allowing them to work in the dark.
“Creation science,” although appearing in various forms throughout the 20th century (we, of course, recall the memorable Tennessee “Monkey Trial” of 1925), has now made its way even into some states’ textbooks, while anti-vaccine campaigners “brandish a few long-discredited studies to make unproven claims about links between autism and vaccination.” So many parents in Oregon have refused vaccination that the state was forced to revise its school-entry policies. In short, Frank argues, that things have so degenerated that we live in an age in which our society “is ambivalent, even skeptical, about the fruits of science.” He warns what we know from history that “even the most enlightened traditions [in which he includes science] can be broken and lost.”
Indeed, the outright denial of scientific truths has long been a problem, as Henrik Ibsen so brilliantly pointed out in his 1882 play, An Enemy of the People, in which another scientist, Doctor Thomas Stockmann, dared to speak out about the pollution of the baths of a wealthy, small Norwegian community. Perceiving that the waters of the town’s famed baths have been contaminated by the local tannery, Stockmann dares to make the report to the city’s mayor, his own brother, Peter. Recognizing that the time involved and heavy costs of repair would mean a loss of tourist money, the town turns against the honest doctor, describing him as an enemy of the people.
Ibsen had been stunned by the society’s reaction to his previous play Ghosts, which subtly speaks of inherited syphilis to a Victorian world that wanted no mention of the disease. In response to the criticism, he wrote the impassioned play about the idealistic doctor who finally came to believe that in matters of right and wrong, the individual is superior to the masses, the latter of whom can be led by self-advancing demagogues. It was a Nietzschean-inspired position that might be traced back to the author’s early play Brand.
The town represented in his play, so I was told, was Sandefjord, a beautiful small community on the Oslo Fjord where I lived in 1964, visiting the remnants of those famous baths during my stay. As I mention elsewhere in these My Year volumes, during my stay there I was taken by my school’s rector and his wife at Christmas to the home of his two elderly aunts, both in their 90s. Their home, as I previously observed, was an utterly preserved Norwegian Victorian home, complete with a hanging tasseled servant bell, the servant as elderly as her masters. I now perceive that this house was one of those that might have belonged to citizens of Ibsen’s play, that these two women, who would have been around 10 years of age, living in that very village during the premier of Ibsen’s play, might have been the daughters of the very folk who denounced the good doctor of the play, that they themselves might have been caught up in their family’s “denials” of truth.
In a year in which I had already planned to devote to “Conversations with Nature,” I thought it appropriate to return to Ibsen’s personal warning against turning a blind eye to scientific truths. By coincidence—which I increasingly have come to see a major force in the experiences of my life—in early 2014 Criterion films announced a new set of three Satyajit Ray “late films,” which included his 1989 Indian version of The Enemy of the People, a boxed-set which I quickly purchased. A few weeks later Los Angeles’ L.A. Theatre Works announced a production of the Ibsen play with actors Ed Asner and Alfred Molina. How could I not buy tickets?

the honest suffer most

Satyajit Ray (writer and director, based on the play by Henrik Ibsen) গণশত্রু Gônoshotru (An Enemy of the People) / 1989

In the small Bengali town of Chandipur, Dr. Ashoke Gupta (Soumitra Chatterjee) is troubled. Several of his personal patients and others in the hospital in which he works have been suddenly contracting hepatitis and other respiratory diseases most often connected with polluted water. Often a writer for the city’s major liberal newspaper, he calls in the paper’s editor, Haaridas Bagchi (Dipankar Dey) to tell him of what he suspects, that the pollution is occurring at the point in the river where the city is most populated, near where the town officials and industrialists have built a holy Hindu temple that attracts thousands of tourists each year. When a test confirms that the pollution is coming from the temple itself, Gupta reports the facts to his younger brother, Nisith (Dhritman Chatterjee), head of the committees running both the hospital and the temple, believing that—although his brother is far more conservative that he—that he cannot but demand the temporary closing of the shrine so that the “leak” or “break” in the plumbing can be fixed. 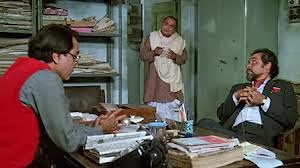 Although both Gupta’s wife and school-teaching daughter warn him that Nisith may not see it that way, the doctor is shocked by Nisith’s refusal to take action and his insistence, along with the temple official deny that it could be possible, since the water served there contains a certain plant that is “known” to purify the water, part of the Hindu tradition. There is obviously no scientific fact behind the religious superstition.

Gupta’s response is to write an article for the newspaper about the issue so that the people can perceive the danger and action be taken. But the newspaper editor finally also determines that he cannot publish the essay, that publishing it will result in protests that will bring the under-subscribed paper to financial ruin.
Gupta determines, accordingly, that he will have to take up his cause with the people directly through a public speech. Nisith quickly makes it impossible for him to rent out any of the major public speaking halls, and Gupta is forced to rely on his intelligent and friendly future son-in-law, Ronen (a character who does not exist in the Ibsen play), who as head of a theater and poetry group, controls the availability of a separate venue.
Naively, Gupta invites his enemies as well as his supporters to attend, but when his brother shows up, it is clear that he, the newspaper publisher and its editor will control the proceedings in an attempt to disrupt the speech. Although the attending theater actors and poets loudly plead to hear Gupta’s speech, others drown them out, and once more he is sabotaged, described in local graffiti as an “enemy of the people.”

Soon after, Gupta’s daughter, Indrani (Mamata Shankar) is asked to resign from her teaching position, and the Gupta’s chagrined landlord tells the family that he must ask them to vacate their house. A telephone call from the hospital tells Gupta that, unless he recants, he no longer has a position there. When the newspaper editors show up to also ask him to rethink his views, he demands they leave.
Seemingly beaten by his entire world, except for the members of his own loving family, Gupta has no choice but to concede defeat, crying out to his wife Maya, in existential despair: “I have done nothing wrong. Why is this happening to me?”  We truly understand in these scenes one of the plays stated tenants: “The honest suffer most.” 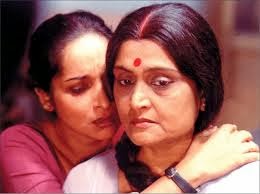 That the director Ray is a true believer in human good has always been apparent in his works, and is particularly evident in this film as he transforms Ibsen’s work from a somewhat cynical tragedy into a kind of darkly comic shift of power, as first the newspaper’s assistant editor, the wise and intelligent Biresh (Subhendu Chatterjee) visits Gupta with Ronen, explaining his has left his position at the newspaper and as a freelancer, will do an interview with Gupta to be published in Calcutta. A few seconds later Ronen announces that he has printed up Gupta’s speech and that he and his theatrical group will distribute it personally to homes. In the background we suddenly hear voices proclaiming their support of Gupta as a hero, the theater group marching upon the city.
Unlike Ibsen’s play, accordingly, Ray’s film ends with what several critics have described as an unbelievable ending. And, on the surface, Ray’s deus ex machina closing does seem somewhat absurd. The very idea of art coming to the defense of science seems ludicrous in a world where we have lost the ability to perceive the integration of the two. But isn’t that precisely what Ibsen was attempting in his play, to bring through his drama the sheltering wing of protection to a truth-teller such as Doctor Stockmann—or in this case, the perplexed Ashoke Gupta and his family?
Ray, sick with heart problems for several years before this film, was told by his doctors that he should not do any “location” shooting. And the film, bound to a stage-set, has been criticized by other critics as being non-cinematic. In fact, like several of Hitchcock films (most notably Rope and Dial M for Murder) shot in tight quarters, Ray demonstrates his cinematographical artistry by focusing his camera on the surfaces and doorways of his rooms and, most importantly, upon his actor’s faces, as they react, sometimes in controlled shock, at other times in total disbelief of the events that transpire between them. Ray’s work reminds us, in fact, that actors do indeed have faces (to restate the comment of Billy Wilder’s Nora Desmond). Yes, Ibsen’s play—even in Ray’s reinterpretation—is, at times, an intellectual exercise—but what a glorious enterprise it is: perhaps even enough to help us drop our absurd superstitions and embrace what knowledge of the vast unknowable world we can claim.