the process of erosion
by Douglas Messerli

Davies’ 1992 autobiographical film, The Long Day Closes, is less a cinematic narrative than it is a series of tableaux, filled with the works’ “characters” shot head-on or in silhouette and abstractions of shadows, wallpaper, carpets, blankets, and windows through which we mostly witness the Liverpudlian rains. Each of these “still-lives” are beautifully composed and framed with particular attention to form and texture, and most are accompanied by music, popular musical numbers, folk songs, and film scores, 35 in all. 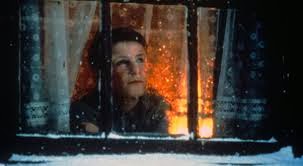 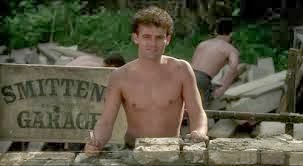 The artfulness of these tableaux is, at first sight, a bit irritating, particularly since nearly all of these figures are such loving and perfect beings, the young boy Bud (Leigh McCormack) presented as fresh-scrubbed cherub patiently taking in the world around him or imagining it in terms of the films he has witnessed, his mother (Marjorie Yates) as a handsome, long-suffering yet caring and joyful woman, and her elder sons and their girlfriends as always pleasant and entertaining. Even a local bricklayer, working outside the family’s window, is a strapping and muscular man who, when he catches the young boy staring at him, responds with a knowing wink. Even the constantly arguing neighbors make it apparent that they are deeply in love. The only evil in this near-perfect panorama are Bud’s school teachers, always ready to slap their student’s palms with a short switch, and the three school-yard bullies, who taunt and occasionally beat Bud up. Yet even then the boy seems to survive with a cheerful mien or calmly retreats to his cinematically-inspired imagination. In Davies’ gorgeous color palette even the Liverpool streets and run-down houses seem poetic. As the director has admitted, this was the period of his own life, after the death of his father, which he most loved. As a boy I lived—in a far more “protected” suburban community—during those same years, and there was much I loved too (the movie makes open references to several films I saw and enjoyed at the same period: Carousel, Meet Me In St. Louis, etc. And I too harbored Bud’s growing homosexual urges; I also was taunted by school bullies. Yet I never could imagine my world as so perfectly arranged as Davies’ friezes. And as beautiful as his tableaux are, they smell of a highly artificed peephole-view of life. 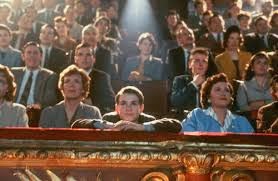 Despite this, however, The Long Day Closes is highly moving, in part, because we know, even from the carefully arranged floral arrangement and formally floral-like characters of the credits, that this world is doomed soon to “close,” that the “day” it describes is about to wither, just as the flowers. As one of Bud’s incompetent professors points out to his students, the world is subject everywhere to the “process or erosion” through rivers, wind, glaciers, oceans, and the processes of life itself. Bud’s perfect work, in short, is being slowly eroded. Bit by bit, his childhood perception of a perfect world is eaten away, not only by the slaps across his wrists and the pummels of his body, but through the gradual pulling away from home of his brothers and their lovers (on one their jaunts he unsuccessfully begs to join them), the falling out of friends (he painfully observes his best friend joining another boy on their to the movies), and the process of aging we see occurring on his mother’s face. Lice are found in his hair by the detestable school nurse. Even the lovely patterns of wall-paper and shadows become, as the movie progresses, more and more abstract, at times entirely distorting the “real” world of his beloved house. The figures of his devout Catholicism become increasingly carnal, a vision of Christ turning into a burly laborer not unlike the handsome worker we see early in the film. From within, Bud’s growing sexual urges threaten the placid world which he adores, forcing him more and more to retreat into loneliness.
Accordingly the beautiful series of tableaux that Davies presents us seem more and more as a series of nostalgic snapshots as the film progresses, becoming, in the end, an album of images that in their very frozenness lock out the brutal reality from which Bud has imaginatively tried to protect himself. If the film collapses time, presenting us with little temporal narrative, we nonetheless recognize that the middle-class world which the director argues “had great beauty and depth and warmth,” is being slowly rubbed away by the boy’s maturing awareness, his increasing recognition of potential and uncontrollable danger, change, and death, as well as his growing sense of his own “outsiderness.” 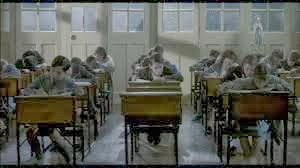 Critic Michael Koresky has pointed to Davies “abiding discomfort with his homosexuality,” which we sense through that early scene in the film when the handsome bricklayer winks, the young boy’s desire quickly turning into shame. And, in that context, we perceive Davies, despite his unconventional cinematic approach, as ultimately a highly conservative figure. He himself admits that in his youth “Everything seemed fixed, and it was such a feeling of security that this is how it will be forever, and I really believed that.”

The poignancy of the film, accordingly, arises from this false perception of the world. Bud’s “day,” with the cobalt-colored night sky, must finally come to a close, Davies’ hero, just like Orson Welles’ central figure in The Magnificent Ambersons (which The Long Day Closes references) getting his comeuppance for his blindness.