a danger to family life
by Douglas Messerli 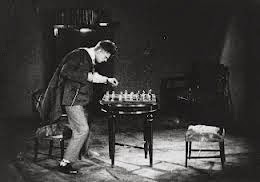 Playing a kind of Soviet Harold Lloyd-like character, Vladimir Fogel is a chess-obsessed man about to get married. Even the morning when he is to meet his future wife at the “registry” finds him busy playing chess with himself, comically rushing from one side of the table to the other. A note tied to his arm reminds him that he must leave for the marriage license, but he simply cannot resist moving the chess figures a few more times and reading from one of the numerous books on chess that his pockets contain—along with his many kittens.
Once on the streets he passes a chess shop and, like a piece of metal to a magnet, is lured back in space and time. Every checkerboard pattern in the world draws him into another game. 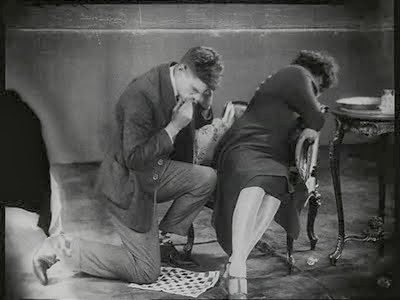 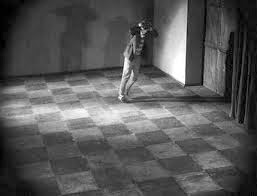 Meanwhile, his poor would-be wife (Anna Zemtsova) is pouring out her heart to another friend, who warns her that chess ”is a danger to family life.” When the man finally reaches his lover, she attempts to spurn him in outrage, while he pleads for forgiveness; but another pattern upon the floor merely leads him to begin another game, and finally she rejects his pleas, gathering up some of the numerous chess manuals in his pockets and throwing them out the window.

Each of these fall of the hands unsuspecting passers-by who are equally taken up with the game, as obsessed, apparently, as our hero! It is as if everyone except the girl is a chess addict. So isolated from the world around her, the woman determines to poison herself, while the hero declares he will drown himself. 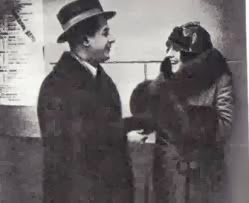 On the way to the pharmacy to purchase her poison, the girl meets a sophisticated and dapper man, who displays his admiration, and she joins him in his limousine, clearly determined to find a new life and lover. The irony—what we know from the very beginning of this short film—is that her new “lover” is none other than the real-life chess world champion, José Raúl Capablanca.

Meanwhile, the sullen hero also fails in his attempt to commit suicide, and returning to the streets encounters a poster announcing a new chess event in which anyone who registers may participate. He runs to the venue to list his name, where he encounters his former lover, now utterly enchanted with the complexity and beauty of the “game,” as she watches with fascination Capablanca facing off with a foe. The two—our hero and his girl—reunite, she now perfectly ready to share his passion.
Shot in the middle of Pudovkin’s filming of his Mechanics of the Brain, Chess Fever was born out the 1925 Moscow chess tournament. Receiving permission to make a documentary of the event, Pudovkin and Shpikovsky filmed footage of the tournament, pretending to make the documentary, but later reinserting it into their comic tale, a kind of dissident act which Pudovkin would seldom take again in his long involvement with Stalinist film-making. And one is saddened seeing this and others of his early films for his later more overtly propagandist works, making us realize what a potentially innovative and original filmmaker we lost.