There often seems to be two Jacques Rivettes, one a highly innovative film-maker, the second, a far more conservative cinematographer of classics such as The Duchess of Langeasis and the movie I watched yesterday, Wuthering Heights. I like both of the director’s sides, however, and from time to time, even in his more conservative fare, we recognize the postmodern sensibility behind it.


Shifting Emily Brontë’s 18th century tale of Yorkshire to the French Cévennes countryside of the 1930s, removes a great deal of the romanticism from the story. Yes, there are still crumbled stone walls throughout the neighborhood, but the skies are mostly sunny, as are the two blonde-haired heroes, Catherine (Febienne Bebe) and Roch (Lecas Belvaux). If Lawrence Olivier, in William Wyler’s familiar version of this tale, looked in his dark, frowning grimaces, like an older gypsy boy, the fair-haired beauty, Roch, appears to be right at home. Rather, it is Guillaume, the dark-haired drunkard, who seems out of place in this landscape. Indeed, Rivette begins his film with a dream sequence in which Guillaume appears to come out the rocks themselves, a voyeur angrily looking down upon Catherine and Roch as they kiss and play nearby. In the dream, he picks up a rock, seemingly about the hurl it upon the couple until, hearing a noise behind him, he conjures up his dead father, a figure apparently watching over the teenage boy whom he had long-ago adopted.

In fact, it is not only their coloration, but their size, beauty, and temperament that make Catherine and Roch appear to truly be brother and sister, while Guillaume seems like outsider. Both of the young lovers are, simply put, almost feral, wild children fighting against the confines of the hardworking and bourgeois farm life in which Guillaume would entrap them. And in these similarities, Rivette turns their love into an even more incestuous-like relationship than it is in other versions.


Although the servant, even in the original novel, is an important figure, one who not only observes and judges those her around, but has a role in their behavior, in Rivette she becomes, perhaps the central figure, a kind of mother and father, and for Guillaume, a hostage-wife. Hélène (earthily portrayed by Sandra Montaigu) is the one person to whom all the others can turn for help, and it is because those needs are so varied that she sometimes appears to further harm those around rather than placate them. Yet, she is the only one who can calm them, and who, at times, holds them together. Whatever little civilized behavior exists on the farm is established by her tireless actions, cooking, cleaning, listening, loving. There is hardly a moment in the film when she is not busy, while the teenagers run into nature and Guillaume falls into a drunken stupor each night.

Obviously, all who live in this ancient stone farmhouse are outsiders, a fact which the director makes obvious when the two wild children come upon a couple of wealthy children playing tennis. It is as if, suddenly, they have witnessed a “brave new world,” which is precisely what it is: a world of wealth, leisure, and class bigotry. It is a world of traps, of pretense and lies, symbolized, in Rivette’s telling, by Catherine’s foot being immediately caught in an animal trap. One of the first lines from Madame Lindon’s mouth, as they carry the girl onto the terrace, is to command them not to lay her on the lawn chair since she will get it dirty. Roch is not even permitted to stay on the patio, but forced to leave at once. 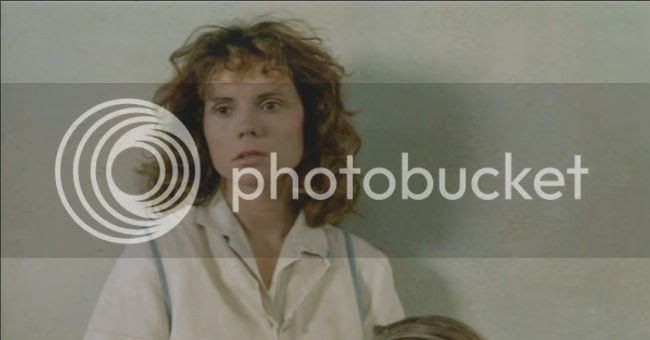 That Catherine, in nearly all the versions of Brontë’s tale, should be seduced by the Lindon world, is not surprising. Even if she has lived a wild life, refusing even to eat at the table in Rivette’s movie, she recognizes in the three weeks while in their care that the elegant mansion and clothes of Isabelle (Alice de Poncheville) and Olivier (Olivier Torres) represent a better life. She returns to her rustic abode with a new dress, and for the first time peers at herself in the mirror, recognizing that she is now a woman rather than a tom-boy ruff housing with her adopted brother. They may still love one another, may even, as she claims, be one another, but she cannot resist the outward appearance and manners of the Lindons.

By choosing actors who are near the actual ages of the novel’s characters, Rivette helps us to more clearly comprehend the mistakes made by all the young figures of the work. Catherine cannot see through the surfaces of the new world she has encountered, while Roch cannot comprehend the pubescent changes in her that have taken place; unlike Brontë’s Heathcliff, who runs, returns, hesitates, and leaves once more, Rivette’s Roch escapes both the imprisonment of Guillaume and the rejection by Catherine simultaneously, never to truly return. For when he does return, he is no longer simply a wild child—using the name of one of Trauffaut’s most notable films, L’Enfant sauvage, is intentional here; Rivette notes that his Hurlevent was difficult to make, in part, because they while shooting they were awaiting the news of Trauffaut’s death—but has been transformed himself into a kind of vengeful brute. He too is now well-groomed and dressed, enough so that he attracts the attention of the now lonely Isabelle. And Catherine may be still attracted to him, particularly since it is clear in Rivette’s version that Olivier and Catherine do not have a serious sexual relationship; but she too has been domesticated, and will not even think of leaving Olivier, forbidding Isabelle to see Roch.


It may be, in part, jealousy that leads Catherine to insist that her sister-in-law stay away from Roch; but she is also perceptive in that Roch is now a cruel manipulator who does not only destroy his brother Guillaume, but will brutalize and rape Catherine’s sister-in-law out of revenge. In his new mien he has become like the Lindon’s, something beautiful on the outside, but rotten within.


Between the extremes, once more, Catherine is trapped, caught up in a rivalry that does really concern itself with whom she truly is. Perhaps by setting his Hurlevent in the 1930s, Rivette is hinting at the dark whirling winds rising throughout Europe which would destroy nearly anything that truly was good. Rivette’s Roch has so changed, in fact, that he cannot actually return to Catherine’s bedside, the way Hearthcliff does. Rivette calls him in up in Catherine’s dying imagination in a dream, and at the sight of him, she dies. Roch is now part of the brewing storm, just as, in their class and social bigotries, is Olivier, the two women in their lives having been destroyed.


In an interview with Rivette, film writer Valérie Hazette decried the fact that the director did not continue with the later sections of the novel. To do, however, would have robbed him of his theme. Roch is already dead when Catherine dies in Rivette’s telling. No longer a “wild child,” he is now an uncontrollable beast for whom not even her memory can bring redemption.