Raúl Ruiz’s Time Regained, is not, as its title suggests, a film based on the last volume of Marcel Proust’s great Remembrance of Things Past, but rather a kind Proustian-like cut-up of the entire series of books, seen through the eyes of the character Proust (Marcello Mazzarella) in the last days of his life. Through photographs and the associations of the great writer’s mind, Ruiz brilliantly deconstructs Proust’s fiction, telling a grand story not through chronological events or even through a consistent narrative logic, but presenting us with a series of haunting and beautiful images of a world gone by, a world of floating women dressed in beautiful gowns and well-groomed handsome men haunting and taunting them with their affairs with other women and men. This gossipy, chattering, vengeful and often politically blind Parisian society creates a kind of dark symphony—what Proust describes as “a music that keeps coming back”—throughout the film which, with the poignant music of Jorge Arriagada, suggests themes which are embedded, repeated, and forgotten.

At moments the director creates overlapping images which suggest multiple realities overlaying each other. At other times the film repeats itself, slightly altering the flow of occurrences. Surrealist images—including a room filled with black top hats each holding a pair of white gloves, a scene in which the partygoers are turned to stone for the child Proust’s cinematic entertainment, and a scene in a male bordello that features a sadomasochistic beating of the Baron Charlus (a beating which dissatisfies him in its timidity) by a young street-boy with Proust voyeuristically peering in on the action from a ceiling window. But mostly Ruiz’s camera focuses on the lavish parties and funerals of these wealthy Frenchman, in which people, along with hundreds of canapés and glasses of champagne, are swallowed up and spit out with sarcastic spite. Behind it all, we perceive, are the trenches filled with the dead men of World War I, a reality which will soon completely bring this close-minded society to its end. But as in Proust’s long work, the figures of his belle-epoch do not have clue about what lies ahead, and in fact are clueless about anything including the significance of their actions or lack of. Any coherent “meaning” we might glean from Ruiz’s stunningly gorgeous piece of cinema can come only from how we ourselves interpret these images, what we make of them. And as the critic J. Hoberman has pointed out, the film almost seems to be a film about a man who through his words created a kind of cinema himself.

In short, this film is less about “events” than it is about the process of film-making or creating a fiction, focusing on how the mind perceives what the body’s eyes see, how it edits/processes those images, and how it puts them together or recalls them. All of Proust’s central characters—Odette de Créy (Catherine Deneuve), Gilberte (Emmanuelle Béart), Le Baron de Charlus (John Malkovich), Robert Saint-Loup (Pascal Greggory), Albertine (Chiara Mastrioianni), Morel (Vincent Perez), Madame Verdurin (Marie-France Pisier), and Madame Cottard (Dominique Labourier), even, for an instant, Swann (Bernard Pautrat)—are here, but Ruiz centers little on the continuity of their interactions, and even when it is quite apparent what they doing behind the scenes—for example Saint-Loup’s affair with the actress Rachel (Elsa Zylberstein) or his later sexual infatuation with working-class infantrymen—events never truly coalesce into a “plot.” Indeed, Ruiz purposely, at times, mystifies the interrelationships of his figures, merely suggesting the lesbian bondings of some of his women or hinting at the Baron’s vicious political views and his pedophile tendencies with regard to the young Marcel. Accordingly, even those who have never set their eyes upon a page of Remembrance of Things Past can enjoy this film. Indeed, if one has read the book, although it might help to enlighten certain scenes, it will more likely frustrate the moviegoer, since nothing comes of it. 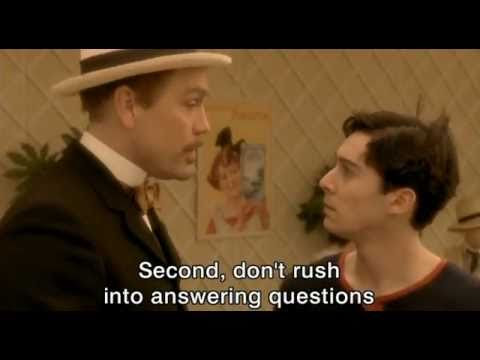 So removed from action is Ruiz’s Proust, as he shyly if debonairly winds his way through these wealthy charlatans, that he seems—as is more concretely revealed in the scene at the gay bordello—more like of voyeur than an actor. Of course, that is precisely the director’s role in filmmaking, to catch his actors “in the act” and mold them into a more coherent reality. But the “reality” here is not as coherent or orderly as a thing in process, as—much like Penelope of the Odysseus myth—Ruiz weaves and unweaves his tapestry again and again, as the various Proustian figures dance around one another as in a grand ball.


The point to all this, quite obviously, is that there can be no one truth, one way of seeing things, no day, as the voice of Proust asserts at the beginning, when things truly “change.” There is no true past: it gets reconstructed through memory and forgetfulness, through perception and distortion. Proust’s grand effort to “regain time” is “the frivolity of the dying.” Time is something that is meant to be lost, just as the figures of Proust’s Paris—of Woolf’s England, of O’Neill’s seaside Connecticut—would one day suddenly disappear.


In the very last scene of Ruiz’s remarkable film, we see the teenage Proust being watched by Proust the elder, while between them the seated figure of the Baron de Charlus looks out at the boy, a demon about to descend upon his victim. We know the result. We see it in through sufferings of the elder Proust in his cork-lined room being cared for by his faithful Céleste. But there is no going back, no fixing of the clock. No matter how much one desires it, time cannot be recaptured nor held back.