Given many of the negative reviews when Rossellini’s Flowers of St. Francis after its 1950 premiere in Venice, it appears that many filmgoers cannot comprehend a religiously accurate text with humor. Marcel Oms, for example, described the film as “a monument of stupidity,” critic Guido Aristarco insisting it presented a formalist and, therefore, false reality. Even my beloved Time Out Film Guide, usually an embracing catalogue, describes St. Francis’s followers as a motley crew, suggesting that the film shares their qualities.

On the other hand, François Truffaut described it as “the most beautiful film in the world,” and, although I wouldn’t go quite that far, I’d certainly agree with Martin Scorsese’ 2005 assessment of it, as a film filled with humor and grace.  The problem with most films about saints, argues Scorsese, is the issue of “reverence”:

The aura of reverence is almost always at odds with the way
the saints must have felt about themselves. It’s as if they’d
already been declared saints in their own lifetime, as if every
word out of their mouths had been pre-sanctified.

Rossellini’s study of St. Francis and his followers belongs to a far earlier tradition, expounded by Desiderius Erasmus and his friend Thomas More, in which described Christ as a saintly fool, a man who, despite the logic of daily needs and human conditions, gave himself completely over to his faith. Working with two St. Francis books, Fioretti Di San Francesco and Vita di Frate Ginepro, Rossellini and Fellini created a true believer, who, in the original Italian title, is also a kind of jester, “God’s Jester,” another kind of holy being.

Using monks from the Nocere Inferiore Monastery to play the roles of St. Franciso and his followers, the director maneuvers his figures through the 9 marked tales in this lovely film, as if they were a herd of deer running through woods in an escape of bright lights. Indeed, the film begins with the Franciscans on the run through a rainstorm, racing to find cover only to discover that their small shelter has been overtaken by an interloper and his donkey, the old man insisting that his donkey remain. The monks, withdraw, only to take joy in their suffering.

Many of the following episodes—and this film is deliberately episodic, as if it might have expanded exponentially to contain as many “tales” as the writers may have desired—are comic, others startlingly touching in their very simplicity. Most of the comic tales involve the near-idiot cook of the group, Brother Ginepro, who is so humble that he gives up his very robe twice, returning home naked. Even though Francis would give up nearly anything to the poor, he orders that Ginepro never again give up his tunic. At another point, left alone to his chores, Brother Ginepro tries to comfort an ailing Brother Amarsebello, who has fasted too often. The broth he tries to feed him is so disgusting that even Ginepro can hardly swallow it. And when he asks Brother Amarsebello what he might like to eat, the sickly man suggests a pig’s foot, which Ginepro gamely goes out on the hunt to find. Discovering a swine, he gently asks the pig for his foot, before chopping it off and returning with the treat to his fellow monk. The owner of the pig soon follows, demanding recompense. Francis orders Ginepro to apologize, which he does, but the farmer refuses and storms off. A few moments later, however, he returns with the dead pig, offering it up the hungry congregation, while warning them never to touch his pigs again.

At another moment, Ginepro, tired of being left behind, cooks enough food to feed the group of two weeks. So touched is Francis that he allows the humble monk to go out and preach. That event proves near disastrous, as Ginepro crashes into the camp of the barbarian Nicolaio at Viterbo who, when his soldiers discover an awl and flint among the monk’s possessions, orders him to be hung. A priest, recognizing Ginepro as a Franciscan, begs for his release, which the tyrant is loath to do, facing the monk down with his tyrannical glare. Ginepro merely smiles, seemingly ready for whatever fate he must face. So amazed is Nicolaio by the man’s humility that he releases him, closes up his camp and retreats, a miracle of sorts. 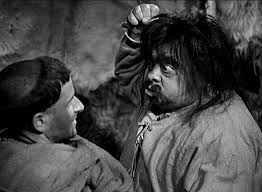 Three other episodes, among my favorite, may counter the hilarious mood of the Ginepro stories, but nonetheless reveal the whimsy of Francis’ doctrines. While praying a bird settles his shoulder, which he quickly picks up and sends away, declaring to the bird that he is busy trying to pray to God. At another moment, he meets a leper, most of whose face has been peeled away. He attempts to touch what he perceives as a soul in torture, but the leper pulls away. Again Francis puts his hands to the leper’s face, and again the diseased man shoves Francis from him. Finally, however, Francis succeeds in embracing the suffering being. Scorsese writes of this scene, noting the startling directness of his confrontational love:

I’ve never seen another film that deals with this basic question
of compassion so eloquently. 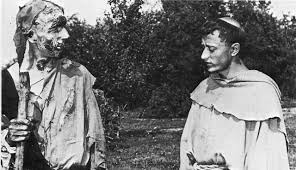 Certainly the most joyous episode of this film occurs when St. Clare and two of her sisters come to lunch with Francis. The brothers scurry about, as usual, this time carefully gathering up masses of flowers in order create a kind of carpet of blossoms where she might step. With the few tools they have at their disposal, they brush their hair, cut their beards and groom their filthy faces. When Clare arrives, they pray, eat and quietly talk—a fire, reports the narrator, igniting the sky.

The last episode, like so many others of this moving film, combines the comical, the whimsical, and the profound commitment of these all-too human men to their faith. The time has come, declares St. Francis, in which the group must break up, the friars going in different directions to preach their faith. But the men are unsure which way to go. In response, Francis orders them to spin about in circles until they are so dizzy that they can no longer stand. Together they do precisely that, twirling like comical whirling dervishes before they fall, one by one, to the ground, each of them gradually getting on their feet to move off in the direction in which they head was pointing at the time of their fall, singing a chant as they travel off away from one another. With astounding simplicity, Rossellini recounts actions of such profound separation that we do not know whether to cry or laugh. But, of course, there is no either/or choice in this view of Franciscan theology: life is both horrible and wondrous. As Francis preached, the moment of most “perfect happiness” is “to suffer and bear every evil deed out of love for Christ.”

Posted by greenintegerblog at 7:54 AM