The location of The Grand Budapest Hotel in Wes Anderson’s fantastic new film is not in Budapest, not even in Hungary, and perhaps not even in the former Austria-Hungarian empire, but in on an isolated hill in the fictional country of Zubrowka shortly before World War I. The original of this preposterous vacation spot is based, so I’ve read, on the Grandhotel Pupp in Carlsbad in Czech Republic and the Grandhotel Gellért in Budapest. But, as in most of Anderson’s films, the “reality” of the hotel hardly matters, and he makes clear from the onset that the outside of the hotel, at least, is, as in most of his works, a detailed miniature. The hotel, although lovingly detailed within, is not meant to be a “real” hotel but is simulacrum, an image of a world that no longer exists. 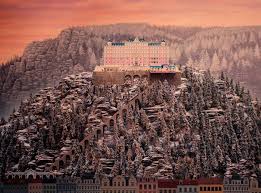 Supporting this pretense is a phantasmagoria of outrageous events that help us to comprehend the world of Viennese author Stefan Zweig—on whose works, in part, this film is based—described in his autobiography The World of Yesterday: arriving by train, reports Richard Brody in The New Yorker, where Zweig was forced to use his bag as his seat, the author was suddenly taken aback in Budapest:
I had gone only a few paces when I had to rub my eyes to make


sure that I was not dreaming…. Budapest was as beautiful and


carefree as ever before. Women in white dresses walked arm in


saw how they bought bunches of violets and gallantly tendered


them to their ladies, saw spotless automobiles with smoothly


shaved and spotlessly dressed gentlemen ride through the streets. Through his exquisitely purple-uniformed concierge M. Gustave (Ralph Fiennes) and the viewpoint of the immigrant lobby boy Zero Moustafa (the talented newcomer Tony Revolori) Anderson and his cinematographer Robert Yeoman take is into just such an incongruous world. Gustave, a homosexual with heterosexual hankerings after older, blonde women, controls the beautiful Grand Budapest with an iron grip as firm as Kaiser Wilhelm, but his purpose, however, is only to give pleasure to his guests, which, apparently, is why so many of these elderly women return to the hotel again and again. Gustave’s world serves his guests with a subservient alacrity that recognizes their needs even before they themselves do. Grand rooms, beautifully mosaicked spas, and magnificent corridors speak not only of the Belle Époque, but of a world outside of time and space. Indeed, one morning, when the nearly clueless lobby boy picks up the daily newspapers for the hotel discovers a headline that sends him racing back to Gustave, it is not in horror of the major newspaper banner—that the borders are soon to be closed—but that one of Gustave’s wealthy conquests, Madame D (Tilda Swinton), has just died.
In seconds Zero and Gustave are traveling by train to Madame D’s estate. Stopped at the border, where the brutal soldiers find Zero’s papers to be insufficient, Gustave courageously steps up, in witty repartee, to protect the boy, for which both he and Zero suffer painful facial slams by the soldiers’ rifle butts. An Austrian Inspector, Henckels (Edward Norton), who often stayed at The Grand Budapest as a child, steps in to save the travelers.
Reaching the Desgotte-und-Taxis mansion, the two encounter a funeral already underway, followed by a reading of the will—officiated by the family lawyer, Deputy Kovacs (Jeff Goldblum)—which apparently leaves the family’s greatest work of art, Boy with Apple, to Gustave. And at that moment we meet the true villains of this maniacal work, Madame D’s son Dimitri (Adrien Brody), his murderous right-hand-man J. G. Jopling (William Dafoe), and the deceased’s hideous trio of badly lip-stick painted sisters. They also meet, momentarily, the mansion’s chef, Serge X (Mathieu Amalric) who, it turns out, was witness to what is now being described as a murder! Given Dimitri’s verbal outrage over the gift of the painting to Gustave, he and Zero determine to steal the valuable art work, but almost before they can stuff it away safely into the Grand Budapest safe, Gustave is arrested for Madame D’s murder and imprisoned in the formidable Zubrowka fortress compound.
So begins a series of roller-coaster-like adventures, including a hilarious escape that combines elements of Jacques Becker’s great prison drama The Tunnel, Robert Bresson’s A Man Escaped, and even Chaplin’s Modern Times. Horrific murders and madcap events are heaped one upon the other, as Anderson incorporates enough cameo roles (with regulars such as Owen Wilson, Bob Balaban, Tom Wilkinson, Jude Law, Harvey Keitel, Bill Murray, and Jason Schwartzman) to fill an epic. And in some senses, The Grand Budapest Hotel almost becomes an epic itself, playing out so many capers that after a while its audience grows a bit weary, if not utterly confused.
Fortunately, the marvelous Zero has discovered love in the beautifully innocent and birthmarked pastry chef, Agatha (Saorise Ronan), who several times saves the day with her Mendl’s cakes and her own bravery in attempting to retrieve the painting from the Grand Budapest safe. Her reward, so the elderly Zero (F. Murray Abraham) sadly tells the “author,” is death from a disease from which today she might easily have been saved. And with that we know also that everything that Gustave and his grand hotel has stood for was destroyed, “stomped out,” one might put it, in the First World War. Its later reincarnation, in which most of the tale is told, is a world of shabby ox-blood and yellow colored furniture which tackily reveals the institutions’ decay.
Finally perceived by the courts as the heir of all of Madame D’s estate, Gustave, again travelling with Zero, is once more stopped at the border. But this time Gustave’s urbane bravery does not succeed. The man whom Zero describes as “one of the last civilized men,” is taken out and shot.
Now, worth millions, Gustave’s inheritor, Zero, is gradually forced to sell off his vast holdings in order, for sentiment’s sake and the memory of his beloved Agatha, to keep the decaying hotel he regularly visits, living in the small servant’s quarter bedroom where he once lived as a Lobby Boy.
Zweig’s beautiful fictions, as well as the works of Proust and others of the period, is all we have left of the grand age of such civilized behavior and beauty. The barbarity of the 20th century destroyed everything that Zweig loved, and in 1942, during the early years of World War II, he and his wife despairingly committed suicide in Brazil to where they had escaped. Even if we might question whether that fabled period was so “civilized” as it presented itself, we have to recognize it as a legendary era whose ideals are no longer possible to maintain. Ladies in lace white dresses and mustachioed and well-groomed men who loquaciously offered up heaps of violets and lilacs no longer exist—nor, perhaps, might we desire them to. 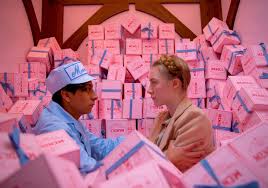 Gustave is described by Zero has a man who, perhaps, never lived in his own time; the same might be said, of course, for Zweig, Proust, Joseph Roth, and so many others who lived to see their grand visions of civilization crumble in the new century, with whole generations of communities throughout Europe wiped off the face of the planet.
There are those who find Anderson’s highly stylized fables as whimsical fantasies without substance. NPR’s Ian Buckwaiter, for example, described The Grand Budapest Hotel as “a culmination of the tinkly music-box aesthetic of Anderson’s work to date, turned up to 11.” I, however, prefer to think of this director’s films, of which the newest is one of the very best, as testaments to the romantic imagination, too few of which exist in our cynical time of denial. Either we can wonder about the vast power of the human imagination or wink at it. I prefer to do the former—but along with Anderson, maybe with just a little wan smile.
Los Angeles, March 29, 2014
Posted by greenintegerblog at 2:29 PM