It is difficult to ascertain why Hitchcock’s Torn Curtain is not a great movie. Clearly it is not as tightly written, as clever and sardonic as Rear Window or North by Northwest. Both Universal Studios and Hitchcock were generally displeased with Brian Moore’s original screenplay, which they saw as too dour, and called in the writing team of Willis Hall and Keith Waterhouse to fix it. So too was Hitchcock displeased with the original score by his trusted composer, Bernard Herrmann, and called for a new score by John Addison. Addison’s music, with its driving, pulsing force, is quite satisfactory, if not as broodily romantic as Herrmann’s previous contributions. 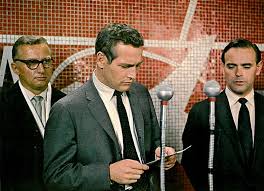 Because of actor Julie Andrew’s busy schedule, Hitchcock was forced to shoot the film at a much faster pace than he wanted. Perhaps more time would have taken some of the kinks out of the movie. But it is also clear that throughout the shooting the director had become somewhat disinterested.


The major problem seems to stem from the presence of its two leading stars, Paul Newman and Andrews, hoisted upon Hitchcock by the studio Although both actors had done brilliant films—Andrews just coming off of two big money makers, Mary Poppins and The Sound of Music, and Newman having just recently done brilliant work in The Hustler and Hud—they were clearly not the right kind of players for Hitchcock’s hands-off methods, and together they create little of the electricity needed to convince us that Andrews’ Sarah Sherman would give up her American citizenship to follow Newman’s Professor Michael Armstrong into East Germany. Newman’s need, as a method actor, to constantly be told of his motivations reportedly received Hitchcock’s sarcastic response, “the motivation is your salary.” While usually following every move of his female heroines with the loving lens of his camera, Hitchcock basically leaves Andrews to her own brittle British prudery. It’s hard to know why she loves Armstrong, and even more difficult to comprehend what Armstrong sees in his handsome, self-sufficient but nearly sexless assistant. Andrews may make a great nanny and governess, but despite her bedroom dalliances early in the film, we doubt she’s much fun in the sack. And despite the handsome exteriors of Hitchcock stars of the past such as Cary Grant and Sean Connery, he obviously didn’t know what to do with the simmering cute-boy.


So Hitchcock turned his camera, instead, on his minor actors, eliciting wonderfully eccentric portraits from Lila Kedrova as the Countess Kuchinska, desperate to find an American sponsor to get her out of the country; Tamara Toumanova as the mean and vengeful Ballerina; Wolfgang Kieling as the vernacular-English-spouting Stasi Thug, Hermann Gromek; Ludwig Donath’s exasperated Professor Gustav Lindt; and the nearly speechless Carolyn Conwell as the Farmer’s wife. Despite their star-statuses, Newman and Andrews became mere mannequins surrounded by such fine character actors. For his leads, Hitchcock might as well have used puppets, despite Newman’s and Andrews’ physical attractiveness.


Beyond these obvious problems, however, there are several absolutely brilliant episodes in  the film, certainly better than anything in his previous psychologically hackneyed film Marnie. 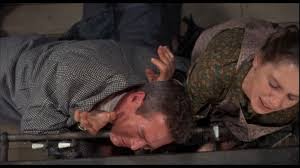 One of the best moments early in the film is the long scene when Armstrong attempts to escape the tracks of Gromek as he enters the Museum zu Berlin, Hitchcock’s camera following through the patterned floors with the sound of footsteps following each of Armstrong’s moves. It’s an eerily troubling sequence which demonstrates the real-life experience of what it is like to be followed in a world where there is no possible escape.


Almost all critics have commented on the long sequence on the farm where Armstrong and the farmer’s wife are forced to kill Gromek when he discovers their involvement with the underground movement π. As Hitchcock told French director François Truffaut, he wanted to show just how difficult it was to kill a man, unlike the James Bond films and similar thrillers. Since they cannot fire a gun without alerting the taxi drive waiting outside, they are forced to use body parts, knives, pans, and, ultimately, gas, to do in the struggling bull, a scene which plays out like a horrifying and yet comic ballet—shot mostly in silence—than the murder which it actually portrays, ending with Armstrong washing the blood from hands. That scene alone ought to justify watching Torn Curtain.


Yet there are dozens of other scenes almost as exhilarating. Kedrova’s near-mad devouring of the couple as she seeks their help, and her intense cries of “Bitte, Bitte” at post office minions are, once again, both agonizing and funny, creating a kind of intense pathos that reveals her aging desperateness. 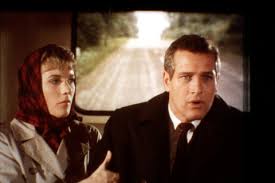 The scene with Armstrong and Lindt, wherein the German physicist is gradually drawn through his pride and intellectual loneliness into a web where he unintentionally betrays his country, all played out against the clock as Armstrong is poised to escape, is absolutely breathtaking.

So too is the frighteningly funny bus ride through the East German countryside. The bus, owned and operated by the Members of π, and filled by their proponents, is given a special escort of the East German police at the very same when the real bus of to Berlin catches up with its simulacrum. Here Addison’s jaunty and forward-pulsing music almost matches the naughty-boy mischievousness of his Tom Jones score.


Underneath, under cover so to speak, Torn Curtain, accordingly, contains a whole series of shorts that are well worth watching, even if, by film’s end, we are faced again with only the two dripping, wet leads. Although they may live happily ever after, the film has not. But as one critic commented, if Hitchcock had made no other films, we might find Torn Curtain a pretty good work of its day.