There’s something about singer-actor Elaine Stritch that doesn’t quite match. The Detroit-born Stritch, whose uncle was the famed American cardinal, is, as Alec Baldwin observes in this new documentary by Chiemi Karasawa, at heart a convent girl. As she made clear in her great one-woman performance, At Liberty—a performance I saw close up in the Carlye Café several years ago—Stritch spent most of her early life as a rather naïve virgin. She raced from Marlon Brando’s apartment when he showed up in pajamas, and threw over boyfriend Ben Gazzara for Rock Hudson, before she discovered he was gay.

Despite this, Stritch has used in her long legs, generally stuffed into black tights, which she wears in private and public, as a kind of trademark. And the little-girl innocence and vulnerability she often exudes is covered up by a kind of boozy (she was an alcoholic, but went 20 years without liquor, only to begin consuming one drink a day in the past couple of years) tough-speaking “broad,” greeting friends and enemies alike in what sometimes seems to be an artillery of personal attacks and profane-laden abuse. Yet, it’s clear, she is loyal to those she loves and who love her. Her once ringing alto voice has turned into a gravelly cackle that surely might scare young children. But then, there is that lovely smile upon her face and a laugh that makes you want to cry. Stritch, or “Stritchy” as Noel Coward called her, is a mess of contradictions. Tough as nails, highly vulnerable and insecure, part baud and part saint, a consummate professional and forever fresh, Stritch is so fascinating, in part, for the contradictions she has all her life portrayed. 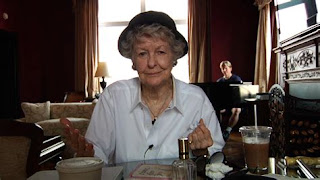 In Karasawa’s documentary she comes off as someone to whom you might never want to get too close, but at the same time you’d love to hug—if only she’d let you! But she’d rather have your anonymous applause. She’s a born performer, even when opening a package of muffins, scolding Karasawa for not following her with the camera as she moves from kitchen to dining table, even snapping at the television set for not showing a hug between her and Baldwin on “30 Rock.” “You look better than you usually do,” she greets an old friend. Part of the cantankerousness that is featured in Karasawa’s film has do with the fact that at the ages of 86-89 (during which the film was shot) Stritch was feeling, frankly, like an old lady. Her diabetes had gotten worse, her thirst for liquor more pronounced, and, worst of all, she was forgetting the lyrics to songs by her friend Stephen Sondheim, which, she quips, are difficult to sing in the best of times. These time, quite obviously, are some of the worst.


Rehearsals with her piano player, the patient Rob Bowman, end in nightmare situations, one of which sends her to the hospital; an impending storm seems to trap her in a New England hotel where her performance was cancelled. Sometimes, as she admits, it’s just not worth it “going on”—meaning, on one level, simply not continuing with the rehearsal, but suggesting the larger life and death situation as well. Yet once she does enter the glow of the stage lights, the audience poised to love her, something remarkable happens: her performance of “I Feel Pretty,” transforms Sondheim’s “ditty” (a song which today he declares is one of his worst) into a grittily ironic paen to survival; the composer’s “Everyone Says Don’t” becomes a mean growl against bourgeois respectability. Even when she forgets her lyrics, she turns the problem into something like fun, demanding Bowman himself sing out or requesting that the audience join in a kind sing-along. Although we know this documentary is “about” her and not a record of those performances, it is frustrating when we catch only moments of her wonderful ability to entertain. 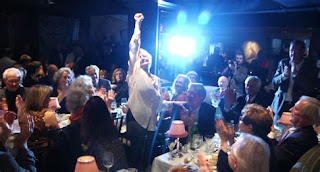 But this is an old woman’s film, long spaces filled with her looking at memorabilia of her noted career or recalling the highlights of a life that included not only wonderful musicals of what is often described as “the golden era of Broadway,” but deeply dramatic roles such as characters in Albee’s Who’s Afraid of Virginia Woolf? and A Delicate Balance. She reads from a letter Woody Allen sent her, offering her part in a movie, but only she promises to behave. At one point she returns to her hometown of Detroit to perform. At another, she sings in New York City’s Town Hall. But mostly she howls at the insufferable pains of old age, of her inability at moments even to speak in anything but gibberish. And there is something truly profound about her comments to John Turturro that “there’s something exciting about being afraid,” which is why she still dares to step in front of the stage lights.


Perhaps the saddest moment of all is when she telephones her nephew back in Detroit to tell him that she wants to leave New York, that it’s time to “go home.” His clever repartee, “Well you can’t say you didn’t give New York a try,” says everything. And her “going home,” we all recognize, is a euphemism of the death she now must face. The film ends on the upbeat, with a written declaration that Stritch plans to retire in 2014, or 2015, or 2016….when we all know that she has already returned to the Midwest to live and, having seriously fallen twice, that she will never again grace the New York stage.


To say that we might miss “Stritchy,” is a bit like saying that you now miss all the good and, sometimes even bad times of your life. You can’t bottle up a person like you might a great wine. All you can do is toast to the memory of such a refreshingly honest slap in the face.