Howard Estabrook (screenplay, based on a script by William Saroyan), Clarence Brown (director) The Human Comedy / 1943


Although it is usually reported that Brown’s film, The Human Comedy, was based on a novel by playwright and novelist William Saroyan, in fact the movie was based on a script penned by Saroyan, which, when Leo Mayer and others read it seemed too long and, perhaps, more socially critical than they wanted the story to be. Consequently, they paid off Saroyan, calling in Estabrook to rewrite the screenplay. Saroyan, furious with the re-adaption, quickly turned the script into a novel, which was published in conjunction with the film’s release, the film helping to make the novel a bestseller, and the novel helping to promote the far more sentimental movie version. 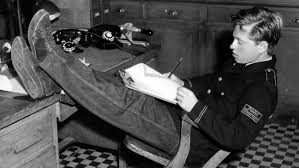 Certainly the film is quite loveable. How could a film with the nearly always likeable—at least as a child actor (although he was a 23 year old adult at the time of filming)—Mickey Rooney as Homer Macauley, Fay Bainter as his mother, Ray Collins as his dead father, Van Johnson as his older brother Marcus, and the adorable Jack Jenkins as his young brother Ulysses be anything but charming? With a cast rounded out by the veteran Frank Morgan, Donna Reed, John Craven, and James Craig, the film, true to many of Brown’s productions, is absolutely brimming with Hollywood flesh. Even the walk-ons, in the form of three soldiers (Robert Mitchum, Don DeFore and Barry Nelson), and the young extras, which include Darryl Hickman as Lionel, pull their weight. This rambling sampling of American culture, of its basic goodness and superficial flaws, accordingly turn it almost into a mini-spectacular. Love strikes young and older figures, travails appear with a paced regularity, and the joys of living in small-town America are trumpeted throughout. How could anyone not like this film? 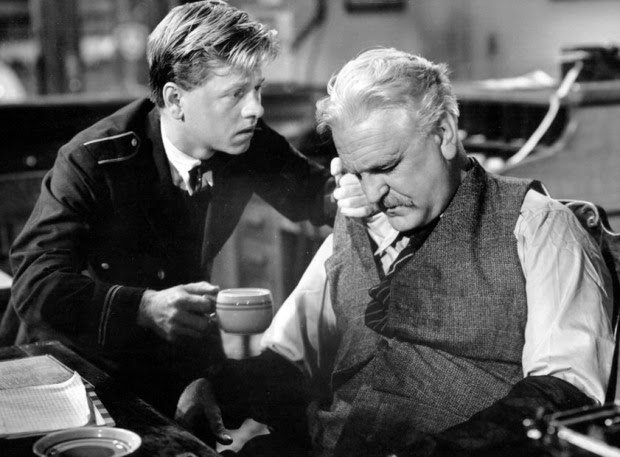 There are also some wonderful moments of Hardy-boy-like treasures: a scene in which terrified children attempt to raid an apricot tree, carefully overseen, with secret joyfulness, by its elderly owner; a beautiful dinner scene in which the down-to-earth telegrapher, Tom Splanger, suddenly discovers that family and friends of his wealthy girl-friend, Diana Steed, are fairly ordinary and friendly after all; Ulysses’ wonderment of the world, from gophers to trains, and his attempt to understand concepts such as fear and “leaving home”: and, finally, Homer’s gradual discovery of a world of sorry and happiness far removed from the simple joys of home. Although the lovely Fay Bainter is asked, at times, to deliver her homilies about life and death as if standing before a pulpit, her soft and careworn motherly voice convinces us of her wisdom. All right, she also plays a harp, along with the piano accompaniment of her beautiful daughter and Marcus’ equally lovely girlfriend, Mary (Dorothy Morris) that might have been painted by John La Farge in the fin de siècle! And brother Marcus entertains his soldier friends on a hand accordion. So too did one of Judy Garland’s friend’s bring a trumpet to her Meet Me in St. Louis party, and she and her sister sang around the piano with just as much posturing sentiment only a year later! Sentiment can always be allowed in a world fraught by major changes such as the transition of a culture into a new century and a country in the midst of war. 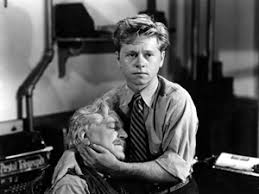 And given the numerous Homeric references, we know that despite his dreams of international travel, that Mickey Rooney’s Homer will probably, like George Bailey of Capra’s It’s a Wonderful Life! (a film of only two years later), will probably be forced to remain home to support his family, recounting the adventures, instead, of his young brother Ulysses’ voyages far from Ithaca. Homer works, after all, as a messenger. Brown immediately connects up the young boy with just such travels by presenting a long scene in which the child watches a passing freight train. And one of the last scenes of the film hints that Homer may end up throwing horseshoes in the town square for the rest of his life.

Harder by far to swallow are the tear-jerking scenes in which the sometimes mischievous Homer is protectively scolded by his teacher, only to be cheered on by her to win his high-hurdle race. Although there is something of sacred wonder in Ulyssses’ and his friend Lionel’s awe of the library full of incomprehensible (neither can yet read) books, the scene, nicely shot by Brown from their child-like perspective, it is just too extended and downright corny to be effective. This Ithaca, California indeed may be filled with American immigrants from all over the world, but do we really need to watch them all decked out in their home-country attire dancing in the woods? This seems too much like American boosterism.*


And then there is the ghost of the Maccauley family father popping up now and then to invisibly kiss his wife upon her head and further narrate a story that is already overly narratively driven!


Although the relationship between Homer and the elderly--a concept which seems almost funny today, since the man is only 67--and alcoholic telegraph receiver, at moments, is extremely touching, his sudden death in Homer’s arms at the very moment that the young man sees the telegraph declaring his brother’s death almost turns the frieze into bathos. Fortunately, Rooney plays the scene out in near complete silence, signifying the tragedy of the “double whammy” he has just received. 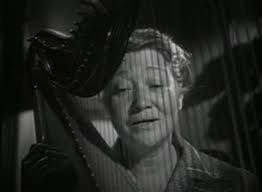 Finally, how to truly explain the deep and loving friendship that arises between Marcus and his fellow soldier, the orphaned Tobey George? Of course, we all know that in times of war, deep friendships between soldiers develop out of their fears and distress. But this “friend” becomes more than a friend, creating a kind of loving bond between them that turns Tobey into a near adoptee (which Freudians might even describe as a kind of symbolic marriage) protected by Marcus’ adoring gaze. Such bonding between males was also central to Brown’s early silent film, Flesh and the Devil, and even, one might argue, in the relationship between Lucas Beauchamp and the young boy in Intruder in the Dust.


Marcus’ love of Ithaca and all that it contains becomes Tobey’s love of the same—to him unknown—ideal. And when Marcus dies and Tobey returns to Ithaca, we can only wince at the implications. With tears dripping from our empathic eyes, we watch the despairing Homer—terrified by having to again present news of which he does not want to be the bearer—invite the crippled newcomer into the house, presumably to explain that Tobey will now stand in Marcus’ place. Will Tobey marry Marcus’ sister Bess or his fiancée? And, in marrying Bess, will he be replacing Marcus in what is a nearly incestuous relationship? Such issues, even subliminally, are a bit hard to swallow in a world where everyone has been portrayed as a saint. Perhaps if only the movie had just mussed up its characters a little bit, allowing them to be real humans, we might have allowed such questions to slip off into the comic night.

*I do admit, as a young man in the 1960s, I have witnessed just such a festival of cultural diversity in downtown Milwaukee, each immigrant group representing their costumes and their native dances.

Posted by greenintegerblog at 1:39 PM