catching up
by Douglas Messerli

Early on in W. S. Van Dyke’s comic The Thin Man, Nora Charles follows her dog Asta into a posh nightclub where her husband, Nick has been drinking. As he generally does, he immediately orders her a drink, as they sit down to talk. Nora (Mina Loy) asks Nick (William Powell) how many drinks he’s already had, and he answers, this is my sixth, in response to which, she immediately orders another five drinks to me lined up for consummation. She is, as she explains, intent on “catching up.” In fact, throughout this film Nora is determined to “catch up” with her new husband, to discover his past affairs, to meet his rather eccentric criminal friends, and to attempt to catch up on his exploits concerning an odd inventor who goes missing and is soon sought out for murder. 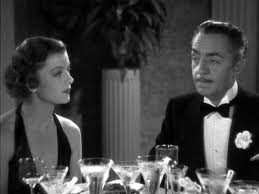 The film follows the adventures of the inventor (Gilbert Wynant [William Henry]), his greedy ex-wife, his current double-timing mistress, his perversely psychologist-reading son, and his rather ordinary and charming daughter, all of whom, along with others, are swept up into a series of crimes and murders, which more and more draws ex-detective Nick into its vortex as he attempts to uncover the actual murderer, which does only by inviting all of the possible suspects to his home for dinner. 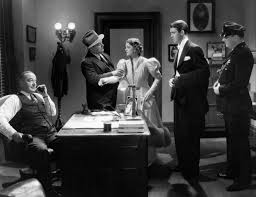 Except for the inventor’s daughter, and her mild-mannered lover, almost all of the suspects are a brutal bunch, so it hardly matters when Nick actually solves the crime by perceiving that the body they have discovered is actually the inventor who has been killed by one of his associates. The crime, 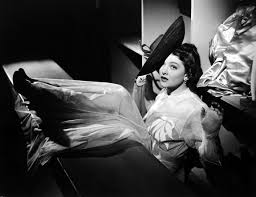 as Alfred Hitchcock would have described it, is merely the MacGuffin, which keeps the action moving. What is truly important about Van Dyke’s version of Dashill Hammett’s work, is the relationship between Nick and Nora, a kind of wise-cracking child’s play. Since his wife has all the money, Nick hardly needs to work and prefers it that way, perfectly happy spend his days in an eternal martini hour and to play with the toys Nora was bought him and the dog. And even though it’s dreadfully warm in this New York apartment, Nora is perfectly happy to stay draped in the new mink coat Nick and bought her. It’s the perfect relationship, she slightly mocking him just as he does her as they continue down the path of a completely blasé acceptance of their married state.


Their married state, in fact, is now California, and there is something almost myth logically fulfilling in the couple’s return east for the Christmas Holiday, whereby solving the outrageous mystery, they allow Dorothy Wynant (Maureen O’Sullivan) to marry her lover and travel back West with them to a world that obviously represented, in 1934, the year this film was made, as a new golden world unencumbered with the nefarious relationships of New York City. I can see the Charles’ now, on their pool-side terrace, serving platters of fresh martinis to the beautifully tanned friends so unlike the blubbering and slightly confused Damyon Runyon-like chaps sitting in Nick and Nora’s cramped New York digs. Finally Nora can just sit back and relax without the need to “catch up” with her husband’s alcoholic consumption and crime-book hunches!


Posted by greenintegerblog at 12:55 PM