without an umbrella
by Douglas Messerli


Given the wry comic sensibility and polished acting of Billy Wilder’s 1954 film, Sabrina, it might be difficult to comprehend why, years later, Wilder described his experience with the film as one of his worst directorial experiences. Wilder himself was distressed with Audrey Hepburn’s acting skills. Actor Humphrey Bogart, who had wanted Lauren Bacall for the role, suggested that Hepburn was fine if you liked 20 retakes of each scene. 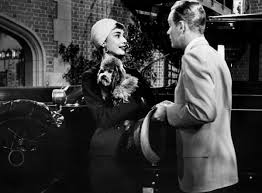 That actor also hated the younger figure in the film’s sexual triangle, William Holden, whom he dubbed “smiling Billy.” And, even more serious, he turned on the director, associating Wilder’s German accent and notoriously imperious decision-making as similar to working with a Nazi—surely a label of the most painful sort for an Austrian Jew who had escaped Hitler’s Holocaust.
Meanwhile, throughout the filming Holden and Hepburn were quietly (or perhaps not so quietly) carrying on a sexual affair, which ended soon after the filmmaking when Hepburn discovered that Holden could no longer have children. Surely their on-screen likeability when they appear in one another’s company, has much to do with that relationship. But the film’s story—based on a moderately successful stage play by Samuel Taylor with further writing by Ernest Lehman, and Wilder himself—centers upon Hepburn’s (as Sabrina Fairchild) growing love for Bogart (the serious-minded business man Linus Larrabee). Throughout her career Hepburn was paired with older men (Fred Astaire, Gregory Peck, Gary Cooper, Cary Grant near the end of his career, Rex Harrison, and others), but it is an even further stretch to imagine a love affair between Bogart, spitting out lines between loose dentures and hearkening back to a vision of “boula-boula” days at Yale, a song of the 1930s. The movie outlines the age difference even more exaggeratedly by featuring Frank Silver’s and Harry Cohn’s 1922 song, “Yes! We Have No Bananas” as among the works in Linus Larrabee’s juvenile collection of records. 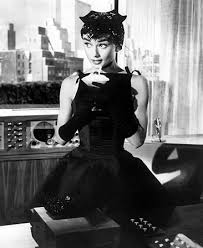 Despite Hepburn’s beautiful smile and stunning outfits (clothes, for the most part, designed by Givency, but for which in-house designer Edith Head won an Oscar, without even a nod to Givency), it seems nearly impossible, given the logic of the tale, to imagine Hepburn giving up her relationship with the playboy David Larrabee (Holden) for the grandfatherly Linus, a man we can well imagine might easily grow into the role of his Monopoly card look-alike figure of the Larabee brother’s father (a befuddled Walter Hampden). While the 1995 remake of the film worked hard to establish Linus as hard-working tycoon who went out of his way to do good for people, except for Bogart’s Linus’ argument that his Machiavellian mergers help the poor to find jobs, his character does not even apologize for using and abusing anyone around him—including his own brother—in order to become richer and gain a new plaque on the walls of his towering downtown business building. Although he claims not to care about money or power, he is, nonetheless, clearly obsessed by the lure of both. 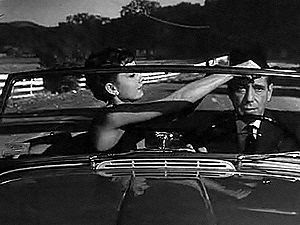 Even re incredulously, we are asked to believe that David, who, as Linus accuses him, cannot even find his way to their family office building, and shows little ability—except in the arms of a woman—out of a water polo pool, suddenly awakens one morning to realize his brother is in love with the same woman with whom he claims to be infatuated, and is now miraculously willing to abandon her in favor the his former fiancée—a marriage whom the Larabee family and her father have knotted into a vast conglomeration of South American sugar cane and American plastics. Given the near-perpetual deceptions of Linus and his outright dissembling to Sabrina throughout his romantic pretense, it is nearly impossible to swallow the film’s conclusions, that all along what Linus really needed was to throw away his umbrella and raise the brim of his hat.
Astonishingly, none of my petty pokes into the logic of Wilder’s film matter. Despite the absurdity of it all, the film spins out a story of magical love between two unlikely figures that in its comic tenderness has hardly been matched. Even if we account for the audience’s willing suspension of disbelief, the director has succeeded in Sabrina perhaps more than he knew in setting up his likeable Cinderella to inherit the keys of the kingdom, which, we can only hope, she will redeem through her impetuous attempts to reach out for love. The grumbling Bogart can mumble into his whisky as much as he wishes, but, as Wilder predicted, he was a better actor in this little comedy than he thought he was. Even without an umbrella, Bogart and Wilder’s film make a gentle landing into the archives of American filmmaking, the movie selected for inclusion in the United States National Film Registry.
Los Angeles, May 28, 2014
Posted by greenintegerblog at 8:07 AM