questions and conclusions
by Douglas Messerli


If, as some critics assert, Charles Dickens’ Great Expectations is one of his tautest, most compressed works, Lean’s film version of 1946, based on a stage version that had already been severely trimmed from the novel—in Dickensian terms, is nearly emaciated. Lean, had not read Dickens’ novel, so legend has it, before he began directing the movie. Yet, as commentators have observed, he often matches the spirit and tone of Dickens’ brilliant work. 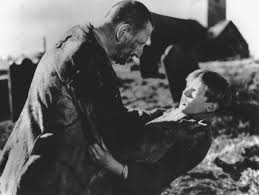 The few scenes, in fact, present events that happen at a near break-neck speed, as the fiction’s young hero, Pip (Anthony Wager), wandering home through the local churchyard encounters the terrifying prison escapee, Abel Magwitch (Finlay Currie), who not only threatens the young boy with death, turns him upside down to release any food that might be contained in the boy’s pockets, and demands Pip return to him at dawn, bearing food and a file.


Despite the eagle-eye and terrorizing “rampages” of Pip’s sister (Freda Jackson), with whom he lives, along with her gentle husband, Joe Gargery (Bernard Miles), Pip manages escape the house with a bottle of brandy and a savory meat pie, along with the wished-for file, delivering them up with a fair share of kindness to brutal criminal. His good acts, however, seemingly have little effect, as the police appear, recapturing Magwitch and his arch-enemy criminal friend, who has turned Magwitch in.


We hardly have time to recover from this breathtaking series of events before Pip is summoned, quite unexpectedly, to the home of the wealthy and elderly local eccentric, Miss Haversham (Martita Hunt), an apparently well-meaning, if curt woman, whom we gradually discover to be a monster, determined through the beauty of her adopted child, Estella (Jean Simmons as a child and Valerie Hobson as an adult) to entrap boys like Pip by encouraging them in fall in love only to be jilted—just as the elderly lady was on the very day of her wedding!


With these two fast-moving series of events, we really have the heart of the story, the rest being an unspooling of sorts of the questions and conclusions asked and made by both the film’s major character and its audience.


Early on in the film, Pip is criticized by his older sister for asking too many questions, which she insists results in all the evils of the world. When Pip is suddenly told by a local lawyer, Mr. Jaggers (Francis L. Sullivan) that he has inherited money, becoming a man of “great expectations,” and will be sent to London to become a gentleman, the boy is again told that he may ask no questions about his benefactor. Jaggers advises: “Take nothing on its looks, take everything on evidence. There is no better rule.”


Yet the child, like his society, cannot resist coming to his own conclusions based on appearances, presuming that his benefactor is Miss Haversham. And like the prejudiced and bigoted society around him—a society that would kill innocent children along with their guilty parents, and, as does Estella, automatically demeans anyone of “common” lineage—bases everything on superficial concerns. It is that problem which is at the heart of Pip’s many dilemmas throughout Dickens’ exciting narrative. 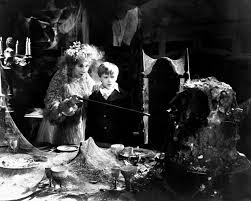 Despite his growing awareness of Miss Haversham’s evil intentions, Pip still supposes her to be the source of his improved situation in life, and she, on her part, allows him to believe his own fabrication, further drawing him into her world, a universe bound together with spider-webs that knit together the emptiness of her dead life. Strangely enough, it is only Haversham’s minion Estella that tells him the truth, that she does not truly love him and that he should rid himself of any delusions about her. But here again, Pip refuses to perceive the evidence, seeing only a beautiful woman that, by societal conclusions, could not possibly be a woman of evil intentions.


Similarly, when Magwitch suddenly appears in his (Pip now played as a adult by John Mills) and Henry Pocket’s (Alec Guinness) flat claiming that he is Pip’s benefactor, the young man is appalled, unable to believe what is now quite evident.


Much of the latter portion of this work centers upon Pip’s punishments and willing corrections for his misconceptions and boorish social behavior, in particular his snobbish dismissal of his dear friend Joe. His attempts to help Magwitch escape back to Australia—he willing even to join him—and his struggle to repay Joe for his kindnesses when Pip, faced with debt, grows sick (events mostly excised from Lean’s cinematic version)—only emphasize that the man of “great expectations” has failed to live up to them through his embracement, instead, of societal conventions.


In Dickens’ work, Pip’s punishment seems also to include his loss of the beautiful Estella—a woman who, after all, has nearly trapped him in a loveless relationship equal to the one in which she has become entrapped by Bentley Drummle (Thorin Thatcher). In his first version of his novel, Pip merely spots Estella, who has been forced suffer abuse from Drummle, at a dinner party. But in the 1863 edition, Dickens’ revised the work to have his narrator report, after seeing Estella, “I saw no shadow of another parting from her”—an alteration about which critics have been split for more than a century. Given the issue of “questioning and concluding or assuming” that plays such an important role in this work, I would tend to side with those who find the change to be unfortunate, myself questioning how Pip could even come to love a woman who had so obviously and rather willingly betrayed him and other men, and who, we later discover, is actually Magwitch’s legal daughter, making her—in psychological terms, at least—a spiritual sister. 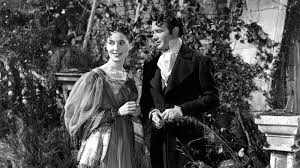 Lean, who generally in his films plays to popular sentiment, goes even further than usual in Great Expectations, creating a dramatic version of the ending that is the weakest moment of his endeavor. Meeting again in Miss Haversham’s mansion, the two face-off, Estella—hurt by her relationship with Drummle—determined to become another Miss Haversham, to join her mentor in her obsession with the past. In anger and frustration, Pip tears open the windows, throwing the moth eaten curtains and other of the room’s leftovers to floor in order to reveal that everything of Miss Haversham’s world is dust and decay. Arguing that he has never stopped loving her, he takes Estella by the hand as the two leave the house together, she hoping that she can meet his commitment to life.

If Dickens’ revision was somewhat sentimental, so too are many elements of his works, and his choice of a more ambiguous and even possibly positive ending, is still all of a piece with the fiction at large. Lean’s fantastical conclusion works completely against the whole logic of the original concept of Great Expectations, pandering to just those societal expectations that are created not by “evidence” but by “appearances.” One can almost hear Lean and his cowriters querying one another, “how can two such beautiful figures not come together and live happily ever after?” The result is a bit like suddenly marrying off Heathcliff to Catherine in a filmed Wuthering Heights, bannering it with a beribboned message: “And So They Lived….”


If there is much to be applauded in Lean’s film, particularly in Guy Green’s darkly etched cinematography, there is also, as in many of Lean’s works which he seemed determined to turn into literary epics, a great deal of unnecessarily restrained passion and outright schmaltz. If Lean was a perfectionist in setting up his camera’s every shoot, it’s too bad he wasn’t a better literary thinker able to fully perceive the consequences of his tinkering with the original narratives and their plots.