Ernst Lubitsch’s classic comedy Ninotchka, based on a story by Melichior Lengyel, in some senses is a frothy fantasy based on cold-war politics. Despite Putin’s despicable behavior in our own times, and the talk about a reestablishment of just such political boundaries, I think it would be almost impossible to remake this film with the open satiric barbs about the Soviet system Lubitsch’s work tosses. The very fact that some of these work as witty humor, only makes us realize just how different the pre-World War II politics (and even the post war attitudes toward the Soviet Union) are from our more corrective evaluations of today. Pondering Stalin’s purging of Soviet citizens, special envoy Ninotchka (Greta Garbo)—sent by the Soviet government to Paris to reign in the spending activities and failures of Buljanoff (Felix Bressart), Kopalski (Alexander Granach), and Iranoff (Sig Ruman)—observes: “The last mass trials were a great success. There are going to be fewer but better Russians.” 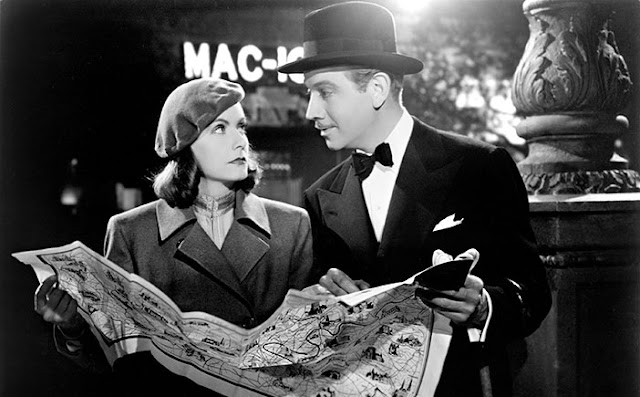 A short while before the comic trio have told French authorities that the jewels (of the Grand Duchess Swana [Ina Claire]} have been “confiscated legally.” In ponderous judgment, Ninotchka describes the handsome Leon (the enduring Melvyn Douglas), with whom she will soon fall in love, as “the unfortunate product of a doomed culture.” In Charles Brackett’s, Billy Wilder’s and Walter Reisch’s always energetic script, the Russians identify any feelings of happiness as something needed to be punished.


On the other hand, the film often twists these same stereotypes into similarly comic put-downs of Western culture. As Bulijanoff, Kopalski and Ironoff satirically point out early on when the jeweler Mercier declares that he will buy the Soviet jewels, but that it will mean a great loss: “They accumulate millions by taking loss after loss.” Summing up Leon, Ninotchka observes:


Ninotchka: We don’t have men like you in my country.
Leon: Thank you.
Ninotchka: That is why I believe in the future of my country.
And Leon, Himself, dishes western values in his radio comment: "A radio's a little box that you buy on the installment plan, and before you tune it in, they tell you there's a new model out." No matter how hard we might try to admire the little Parisian hat that catches Ninotchka's eyes, it is a "silly" object akin almost to the gunny sack dresses that Ricky and Fred have shipped up by designers for their wives in an I Love Lucy episode to prove the nonsense of Paris fashion. 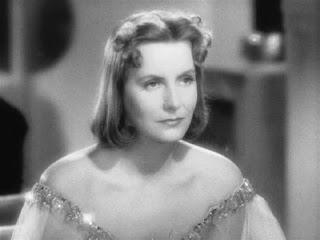 Watching Ninotchka again, years after my last viewing, I realized just how dependent Lubitsch’s work is on these series of witty observations for the film's “charm.” But equally, important, it seems to me, is the way Ninotchka is portrayed. She may, at first, appear to be simply a gloomy ghoul, determined to visit the light and power company, the sewers of Paris, and even the Eiffel tower simply to glean technical information; but she is also almost pathologically honest, which makes her different from nearly any other woman Leon has encountered. If Swana is the typical woman of Leon’s past, he can perceive them merely as slightly daffy manipulators, babbling out through self-centered monologues information that demands response rather than comprehension. When she attempts to demean Ninotchka at a nightclub by nonsensically muttering about a dog given to her by Leon, ending with her exclusion of the Russian envoy, “Oh here I am muttering about something which I’m sure makes no sense,” Ninotchka’s clear-perceived summary of the situation takes even Swana aback as she declaims that now everyone will understand her!


Ninotchka, on the other hand, attracts Leon precisely because she means what she says. When he attempts to trick her into viewing his own home from the Eiffel Tower, with the hope of one day drawing her there, she asks straightout, do you want to take me there? And soon after they are in his house, listening to the radio and beginning to speak romantically. Time and again, throughout this film, Ninotchka is made appealing by being like no other, represented as a true idealist who speaks the truth; and it is that straight-forward almost clumsy approach to life that makes her, as a character, so endearing. 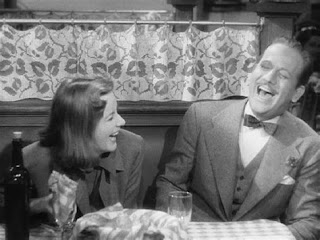 The worst scene of this movie was also the most hyped, the “famous” scene in which the legendarily serious Garbo supposedly first laughed (although she had done so in other films as well). In the small workman’s bistro into which Leon follows her, the great Lubitsch, pulling out all the stops, seems to be rechanneling the directorial idiocies of Frank Capra through Leon’s corny common man greeting of the Parisian worker’s: “Hi ya!” followed by his attempts to tell jokes which result in a far more burlesque-like collapse of chair and table. The bellows of unconvincing laughter this occasions is almost unbearable in its he-hawing gestures. Lubistch’s famed “comic touch” emanates from subtlety, witty language, a sudden twist of the plot, social and political blockades to love brushed gracefully aside. It seems almost as if the studio has written and shot this scene. Instead of the “the Lubitsch touch,” one might describe this scene as having been stomped on by MGM hacks.


Fortunately, Leon’s and Ninotchka’s love is not based on this particular encounter—or any others for that matter. Refusing the romantic notions of love, Ninotchka comprehends love in very scientific terms. Leon’s general appearance, as she puts it, is “not distasteful.” “Chemically we’re already quite sympathyetic.” When he asks what he might do to further this sympathy, Ninotchka expresses it as honestly as anyone might: “You don’t need to do anything,” she replies, kissing him. Without all the claptrap of the boulevard, love is as simply represented as two sets of lips meeting one another, and by the time Ninotchka is forced to return to the Soviet Union, she and Leon have clearly already “had Paris,” in the sense that Rick and Elsa had “had Paris” in Curtiz’s Casablanca. The later couple’s meeting again in Casablanca, if rekindling their romance, is basically a tragic one, while Ninotchka’s and Leon’s reencounter in Turkey is nearly all comic, with only the  break up of Buljanoff, Kopalski, and Iranoff, through their positions in the marketplace, casting any shadow over what will surely be their return to sunny Paris.