woman of discontent
by Douglas Messerli


Miklós Jancsó’s Electra, My Love (also titled Elektreia) is a film that could never be made in Hollywood—or for that matter imagined by most Western European countries. A political musical, based on the story of Orestes plays, and centering on Electra might possibly be imagined as a kind of theatrical joke, but to actually present an entire scenario, presented in 12 long photographic shots is almost inconceivable. And, as Electra (Mari Töröcsik) intrudes upon King Aegisthus’ József Madaras) celebratory day—held every year for the now for the fifteen years since her father, Agamemnon’s murder—wandering in a kind of stumbling pattern through the crowds of dancing peasants, nubile nude virgins, singers, comic dwarves, and a column of stridently brutal flagellators, as she speaks her long monologue of sentences such as: “I, Electra, who does not forget. While one person lives who doesn’t forget, no one can forget.” Despite everyone’s attempt to ameliorate and calm the “mad” woman in their midst, Electra remains, as Aegisthus describes her, “the woman of discontent.” 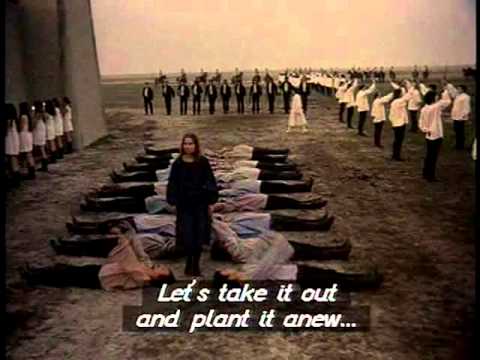 We recognize, in these theatrical cries, the roots of a fable of serious political significance, in which Electra rails again and again against all tyrants, which people such as her deter in their very statements of the tyrant’s lies. But also cannot help but wonder, at times, whether or not Jancsó is also intentionally satirizing his own metaphors; even in the most grand epic presentations of royal ceremony, such as the operatic-like marches of the masses of The Ten Commandments or Verdi’s Aida, have we encountered such over-the-top obsequious demonstrations, as the peasants, like an amateur folk-dance group, run back and forth across the Hungarian putzla amidst the posed scenes of nude women and young boys. And, in a sense, we side with Electra all the more because of our recognition of the absolute silliness of Aegisthus’ celebrations, and his bread-and-circus solutions to his culture’s woes. Even if we didn’t know that Aegisthus is a tyrant, we have to recognize him, in these often meaningless song and dance routines that he is a grand impresario in the manner of someone like Cecil De Mille or Busby Berkeley, carefully managing the masses by parading them in patterns so grand that even they cannot recognize their own beginnings ends. When the peasants are no longer asked to perform they fall to the ground, as if drained of any energy they may once have represented.


Electra awaits only for her vengeance in the appearance of her brother Orestes, who she predicts will destroy the killer of Agamemnon; but when he does suddenly appear, out of nowhere, she no longer recognizes him and kills her brother because, as he has bragged, for killing Orestes. Taking advantage of the situation, Aegisthus declares that Electra now be punished by death. But Orestes—who stands throughout Jancsó’s mythologically-grounded fable, as an eternal force—comes alive, capturing the King and his associates, and killing his beloved aide before turning his attentions to Aegisthus himself. By this time, the very presence of such a savior has fomented a rebellion within the people themselves as they turn away from their stylized dances to the murder of their former tyrant-king.

In Jancsó’s version of the myth, Orestes is not visited by the furies, but by his own sister who destroys him as he destroys her, each arising the next morning to repeat the acts. So, suggests the director, their familial self-destruction is necessary for regeneration, needed in order to destroy the tyrants of each generation. Jancsó uses a metaphor of the firebird (which the film comically portrays in the image of a small, red, airplane upon which Electra and Orestes decamp and return), who dies each night to be renewed each morning to reinfuse the population that they will arise with new purpose.


Filmed originally in 1974, an era that vibrantly led up to the overthrowing of Soviet power in Hungary in 1989, Jancsó’s film represents numerous issues of that country’s politics during the period. But the somewhat Mao-like revolutionary philosophy seems to me to lie far too close to the generations of tribal warfare in the Balkans—particularly given his association of his thinking with generational battles of family vengeance. One generation’s tyrant may be the next generations savior, while each destroys the worlds (and individuals) surrounding. Caught up in these endless cycles, so we can observe, neighbors, and neighboring cultures equally terrorized until there is no end of human suffering, the firebird itself becoming the tyrant of its own good intentions. Jancsó’s curious fiction hints at, but never answers the obvious question: “Are people better off in living in a spiritual death under the tyrant or better off existing in a perceived free world of eternal death?” Neither world seems to me provide a solution to survival of the individual or the species.