Passing Fancy, Ozu’s 1933 silent film, like so many of his other films throughout his career, is a thoroughly enjoyable film, filled with wonderful moments, whose plot is hardly worth recounting. A poor, lazy, and slightly despicable “everyday” man, Kihachi (Takeshi Sakamoto) lives alone with his young son, Tomio (the charming Tokkan Kozo). Next door lives Kihachi’s best friend, Jiro (Den Obinata), with whom he works at a brewery, and the restaurant where he and Jiro drink and eat almost every morning and evening, owned by another friend, Otome (Chouko Iida).


The film begins at rōkyoku performance, a kind of variety show including readings of famed Japanese texts. But most the camera’s attention is taken up by broad comic events, as the hot and mostly undressed crowd comically explore every aspect from petty thievery (of a found wallet), the attacks of lice (it appears the entire crowd badly needs a delousing), and mockery of some of their neighbors. The whole event plays out a bit like a rowdy gathering of adult boys being boringly entertained. Many of these figures, particularly Kihachi, as we later learn, are uneducated and cannot even read. This is their most significant cultural event. 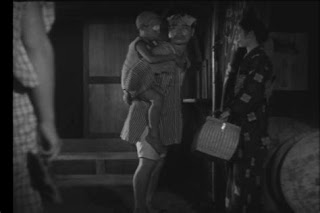 Soon after the theater performance, Kihachi, on his way home with Jiro, his son hefted upon his back, encounters a destitute woman, Harue (Nobuko Fushimi), to whom he immediately and ridiculously—given his age difference and lack of attractive features—is attracted, and becomes determined to court. Despite his young son’s apparent embarrassment of his father’s behavior, when she asks if he know of a place where she might sleep for the night, he sets her up with his friend Otome; Jiro, perceiving the poor girl as a former prostitute, dismisses and tries to dissuade Kihachi from any involvement.

The kindly Otome soon becomes interested in the quiet girl, hiring her as a server. And Kihachi, meanwhile, becomes even more determined to become involved with the handsome woman, asking for an advance from his brewery boss so that he might buy her a present, and, after lunch, refusing to return to work so that we can communicate with her. So begins a long series of ridiculous gestures on Kihachi’s part to flirt with a young girl who sees him as nothing but a kind of “uncle.” She is far more attracted to Jiro, but he, quite piously rejects her, attributing any her interest in him simply as another attempt to find great financial support.


When Otome determines that Harue should get married, she visits Kihachi to discuss the issue, he hoping to be perceived as the perfect solution to the problem; but when he suggests that he is love with Harue, Otome laughs, dismissing him. Besides, she proclaims, Harue sees Kihachi only as a uncle; while she is in love with Jiro. Will Kihachi please help convince Jiro that he should marry Harue? she implores. 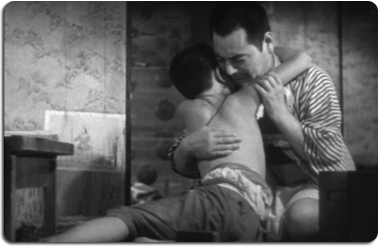 So must Kihachi come to terms, perhaps for one of the first times in his life, with his own longevity, which, given his self-destructive habits, may not be as long as he imagines. Although he agrees to convince Jiro to marry Harue, the facts that Otome has forced him to face drive him to drunkenness. At the very same moment, several of Tomio’s schoolmates gang up on him, mocking him for his father’s inability to even read the newspaper and falls into a near stupor from drinking in response to Harue’s lack of sexual interest in him. The event is particularly painful to the young child since he is one of the best students at school, which seems to have given him no protection.


When his father returns home drunk, Tomio angrily mocks and scolds him for his behavior, to which the drunken father responds by beating him. Tomio, in turn, hits back, slapping his father across the face again and again and throwing his own textbooks at him. A few seconds later, however, the child breaks down into a near-torrent of tears, hugging his father to him in order to ask for forgiveness. We see him, a short while later, back at his table reading his schoolbooks once again. As a kind of make-up gift, Kihachi gives the boy 50 sen to treat himself to a treasure.

At work the next day Kihachi is suddenly called home, someone reporting that his son is seriously ill. Rushing home, he discovers his son in a near comma, a doctor attending him. The boy, who has used the coin to buy a series of sweets—all of which he has consumed—is diagnosed with actute enteritis. Although the cause of the illness may seem comic, the illness itself is quite serious and, for a period of time, as the boy is attended by Otome, Harue, and Jiro, Kihachi is terrorized by the possibility that his son may die. Just as serious, he perceives suddenly that he has no way to pay the doctor; his method of living day by day has not allowed for any emergency or even an ordinary life.


Perceiving the family’s dilemma, Harue suddenly speaks out, assuring Kihachi that she will raise the needed money, for which he sincerely thanks her but kindly rejects. Jiro, recognizing that she might raise such a sum only through prostitution which would not end well, approaches her alone, insisting that he will raise the needed money. And, in that same moment, revealing that he does love Harue and is ready to marry her. 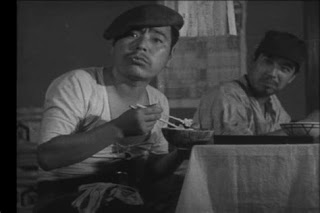 .Jiro borrows the money from the kindly barber, determining to get a temporary job in isolate Hokkaido as a laborer to pay him back. Harue, accordingly, is equally pained that at the very moment she has found happiness that it will be whisked away from her. When Kihachi hears to Jiro’s decision he tracks down Jiro, slugging him out so that he make take his place on the ship travelling north. Although the barber insists that he need not even paid back, Kihachi leaves his son in Harue’s and Otome’s hands, and goes aboard the ship.


The ship does not even get out of port, however, before, after showing the other would-be laborers the message the school has sent his son, Kihachi suddenly realizes his mistake in abandoning his beloved son, and jumps overboard, swimming back to a peninsula which will eventually lead him back to Tokyo.


Despite apparent emptiness of some of these comic tropes, however, Ozu’s film often becomes brilliant through minor but important cinematic techniques, the use throughout of mirrors to reveal what is often happening out of view off-screen, the often hilarious theatrical poses into which Tomio falls immediately after his bad-boy bullying of his worthless father, the linguistically absurd koan-like childish jokes of Tomio—“Why is the sea salty? Because there are so many salted salmon,”—which, with such like emphasis on language sometimes make this film seem as if it were a talkie, and the beautifully shot everyday scenes of life on the characters’ winding, backstreet.

Finally, Ozu, as he does in several films, uses a series of subtle behavioral and cultural clues that seem almost perfect for a Roland Barthes-like reading of elements of the story. In this case, it centers upon the way in which Ozu’s male characters, Kihachi, Tomio, and, to a lesser degree Jiro, employ various stages of dressing and undressing throughout the film. The characters, as I have mentioned, seem to be dressed in their underwear for the first scene of the rōkyoku performance, but, obviously, dress up to go to work and school, shedding their clothes again when they return home. In Passing Fancy they drop these articles of pants and shirts upon the floor, the woman stopping by often to hang them up on hooks. In particular, we watch Kihachi, abandon his work clothes for more traditional Japanese attire in order to woo Harue, a quite elaborate procedure that makes him the subject of mockery to those around him, while he struts out, peacock proud. They recognize such dress, clearly, as being itself a kind of “passing fanciness? The loose white robes of the traditional clothing seem more comfortable given the high temperatures of the Tokyo summer which they all suffer. But it is that very ceremonial quality of such attire that sets him apart from all others. For the most part, the males are happy simply to shed their work clothes as quickly as they can upon returning home, becoming figures closer to naked natives than to men assimilated to publically approved attire. Even the intelligent child Tomio prefers, for the most part, to go shirtless. In a sense, all of this dressing and undressing, something in which the women do not participate, suggest their discomfort with participating in the social conventions of covering their bodies in costumes that represent position and values—in short, fashion. And in that respect, these figures are less “everymen” as they are undefined lumps of raw flesh, beings without the ability to enter the society at large. In particular, Kihachi, who pulls off his clothes with his own feet, suddenly relieved in the freedom of the act, seems as if he will never quite assimilate to the society at large. Despite his abilities, Tomio clearly needs to accommodate himself to the schoolboy jacket and pants if he is to transcend his father’s world. Jiro, the former officer, dressed at home, in a more comfortable traditional-like robe, but without the trimmings of Kihachi’s more formal attire (his robe is dark, not blindingly white), perhaps will learn to marry comfort with fashion and move into the whole of society in which he and his new wife can survive.


If nothing else, Ozu’s early film is worth watching simply for its comic sense of humanity compared with a time, soon after, when everything will completely fall apart, and where officious costumes will be recognized as necessities, and wherein the well-educated Tomio will perhaps die in the war.