home to the brave
by Douglas Messerli


Last Tuesday I caught the last presentation of the Martin Scorese curated “Masterpieces of Polish Cinema,” Andrzej Munk’s two-part World War II-based work, Eroica. (Heroism). Originally filmed as a three part work, the last, “The Nun” (subtitled “Con bravura”), was cut from the final work, in part because it simply seemed “less important” than the other two sections.


Both consider the issue of how we, or, more particularly, the Poles might describe  heroism. As the flier to the film asks: “Why was the subject so sensitive and painful [to Poles]?” 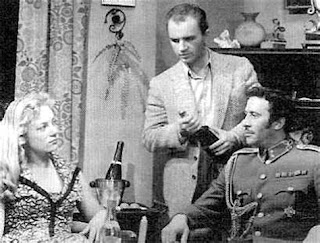 First take into consideration the particular history of Poland, its many
defenses against invasions, the loss of its statehood for 150 years during
a period marked by numerous patriotic insurrections, the retrieval of
its independence. Next, factor in the defeat it suffered in 1939, only to

be followed by renewed resistance and struggle. Consider that national-
ism, patriotism, and heroic suffering played roles in all these epochs. hen
remember the valiant struggle of the Home Army, the largest resistance

group, was presented falsely, libeled, and those who took part in that
were even victimized during the Stalinist period, and it is no wonder that
many people waited for some satisfaction to their sensibilities, waited for
compensation, as it were. Some justice came finally. Politicians made
gestures of appreciation, mostly reluctantly, more to bring reconciliation
than to give credit. (Bolesław Michałek and Frank Turaj)


In short, hated as they were by both the Germans and their would-be liberators, the Polish people, even while fighting for their survival, necessarily perceived their actions with a large dose of irony. Heroism, although a romantically-longed for achievement, was understandably met with skepticism and even doubt.


The comedy of “Scherzo Alla Pollacca” derives from the military service of Dzidziuś (Edward Dziewoński) during the Warsaw uprising. While his platoon practices its formations, a plane circles. Pointing it out the commander, the recruit is told to keep marching, only to insist upon its existence once more and it circles in for the attack. By seconds, the recruits fall out, scurrying off, with Dzidziuś facing gunfire from all directors before he, entering a Polish-held cave, discovers a man racing a bicycle in order to generate electricity. The whole event so disorients the recruit that he throws down his gun and returns home through the dangerous landscape of battle. 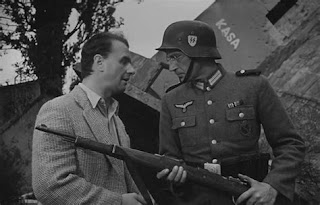 Once back home, he discovers his wife, Zosia (Barbara Polomska), nearly embracing an Hungarian officer (Leon Niemczyk) who has been billeted within their home. While recognizing the sexual betrayal of his wife, he nonetheless toasts the interloper in an attempt to get him drunk. Instead, as they walk back to the Hungarian’s base, the would-be enemy (early in the War the Hungarians had joined the Axis powers) confides that his battalion would like to join the Polish forces (Hungary secretly signed a peace agreement with the US in 1944).


Although he wants to part in the battle, Dzidziuś cannot but report this fact to the local authorities fighting nearby. The local officer demands that they take this information to the Home Army Commander in Warsaw, which, with the local officer, Dzidziuś undertakes, despite being stopped along the way several times by Nazi officers.


Forced to take the message back to the locals, he first becomes drunk, weaving through the battlefields on his way home with a terrible headache. The voyage and his survival, in fact, might remind one a bit of the peregrinations of Buster Keaton, as he almost accidentally survives, reporting back to the local headquarters and the Hungarians that the Home Office has denied their offer. Throughout, Dzidziuś keeps demanding he that receive “credit” for his actions, awarded instead by disdain and disbelief of his acts.


Returning home, Dzidziuś again is met by the local officer who is headed back to the front to fight. As a wartime deserter, the recruit seems determined to return to his unfaithful wife, but encountering her, turns back to join the office on his new adventure.


If the first half of the film is basically a comic presentation of “heroism,” the second—although displaying comic moments—is basically tragic. In “Ostinato Lugubre” two recently captured Polish officers are introduced in a POW barracks where most of the officers have been imprisoned for several years, having lost nearly all sense of morale, some of them such as Zak (Józef Kostecki) having become almost insane. The only thing that seeming keeps him alive is that his best friend, Lt. Zawistowski, has apparently been able to escape from the prison, standing for all of the prisoners as symbol of heroic possibility. 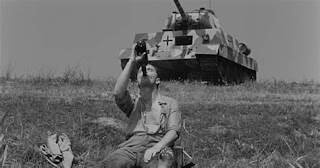 Some of the detained officers remain devoted to military protocol, ostracizing men like Zak, who with ridiculous rules and punishments (Zak is divvied out less food than the others), until, fed up with the posturing his these fellow prisoners, that he walks through the bales of barbed wire which serves as the camp retainer. Two women, however, quickly, gather him up and bring him back to the prison gates. Unable to bear the company of those around him, Zak retreats into a small cubicle made from a container sent through the Geneva Convention to the prisoners.


One might be tempted to compare this short film to Billy Wilder’s Nazi prison tale, Stalag 17, except that Munk and his writer, Jerzy Stefan Strawiński have drained almost any humor from their tale and have refused to portray the imprisoners as buffoons. In fact, we hardly see the Nazis, since the prisoners suffer more from the pettiness and posturing of their peers than brutality of the Germans. Although, as in the Wilder film, one prisoner receives a large store of rations, rather than selling them as Sargeant Sefton might, he greedily attempts to eat them all at one sitting, becoming sick in the process.


One of the new detainees, Kurzawa (Józef Nowak), however, accidently uncovers a completely other dimension of barrack life as, seeking a glass a water in the middle of the night,  discovers another suffering officer, Lt. Turek (Kazimiez Rudzki) removing a tile from the ceiling, whereupon he discovers that the “heroic” Zawistowski has not really escaped, but is hiding in heating and cooling ducts. Keeping the secret, Kurzawa begins to minister to the dying Zawistowski, providing him with sleeping pills and medicine for his cough.


After another the nearly unbearable torture of watching the greedy officer stuffing his stomach as the others spur him off, Zak, weary of life, opens the door to the barracks and enters the courtyard alone in prohibition of camp rules. The slowly shot scene of his death by gunfire is nearly unbearable to watch.


Zawistowski, Kurzawa reports, has also just died, and Turek, to whom the camp commander owes a favor, arranges for the duct to be shipped out, the non-existent hero embedded within. Who is the true hero, Munk’s profound film seems to ask, the would-be honorable Zawistowski, the weary suicidal Zak, or keeper of the secret Turek. Kurzawa, the complicit observer—like the audience itself—is left to make his own choice, just as we are.