people without choices
by Douglas Messerli


As the camera winds in and out of the population of the offices within the glass-lined offices and halls of a downtown New York City office building, we are quickly swept up into a world that we immediately recognize as being both exhilarating (even the window views, when we get a glimpse, are vertiginously beautiful) and extremely claustrophobic (not only can everyone see each other, but the camera scans the row upon row of computers where the lowest of company employees must daily sit shoulder to shoulder as they convince their favorite customers to buy and sell). All in all, it is a most unpleasant world; yet everyone in view is well dressed and groomed and apparently eager to go about his or her daily business. And, so we soon learn—mostly through the inquiries of the youngest and most junior man on the company payroll, the brash self-centered Seth Bregman (Penn Badgley)—they have good reason, in their own thinking, to be so well-dressed and eager: they each make a lot of money, from hundreds of thousands to millions! These are the Wall Street investment traders of whom we have read so much about in the past few years because of the myths surrounding them (dished up mostly in overwrought films) and the effects they have had upon our lives (related through newspapers and the television news medias). 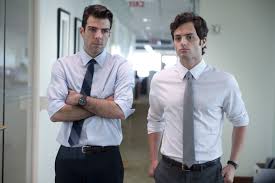 Almost before we can completely assimilate the world in which he have suddenly discovered ourselves, several younger employees, including Bregman and his associate Peter Sullivan (Zachery Quinto)—having just caught a glimpse of a small herd of hired henchmen, about to fire a large percentage of their co-workers—mutter to their soon-to-be senior supervisor, Paul Bettany (Will Emerson)—“They’re going to do it right here, in front of everybody?” He suggests they simply hunker down, pretending that they don’t exist, as the evil-minded squadron call out individuals one by one to meet with them. We follow the firing of Eric Dale (Stanley Tucci, Head of Risk Management) where he observe the impeccable scouring process: he has 49 hours to accept their benefit program and must immediately collect his personal belongings and leave the building; his computer access, and codes, and even his personal cell-phone have been deactivated.


A long time employee, Dale meets the situation with a kind of saddened reassignment. Certainly, he’s seen it all before, but he cannot resist mentioning that he is in the middle of  important computer research. All activities will be taken up by others who remain, he is told. Even though Bregman and Sullivan have been told beforehand of what was about to “go down,” they are startled by the turn of events—particularly since Dale has taught them nearly everything they know—and attempt to apologize to their former colleague. At the last moment, as he is about to take the elevator down into a metaphorical non-existence, he hands Sullivan a USB drive, warning him to handle of the data he may find there carefully. 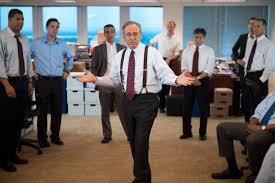 By the time Dale and other company regulars have been axed we have already journeyed from a kind of documentary-like presentation of the back halls of companies like Lehman Brothers, which brought down the US economy in 2008, to a kind of would-be horror film in which the monsters are not as mythic as they are disturbed and troubled fellow human beings. As the other late-workers clean up their desks, Sullivan remains, obviously intrigued by Dale’s warning. Opening up this new Pandora’s Box, he discovers a series of imaginary projects of the volubility of his company’s accounts which quickly reveal that, in their combination of good and outright rotten securities (failed loans and other investments without any real money behind them) have already resulted in possible losses far beyond the worth of the entire company. In short, if any of their trades had come up for question, the entire company would have immediately gone into a bankruptcy that would affect the world stock market. Indeed, they have  in the past week reached days in which the bad securities have outweighed the good. By day’s end, it is suddenly suggested, the entire financial world may collapse because of their activities. 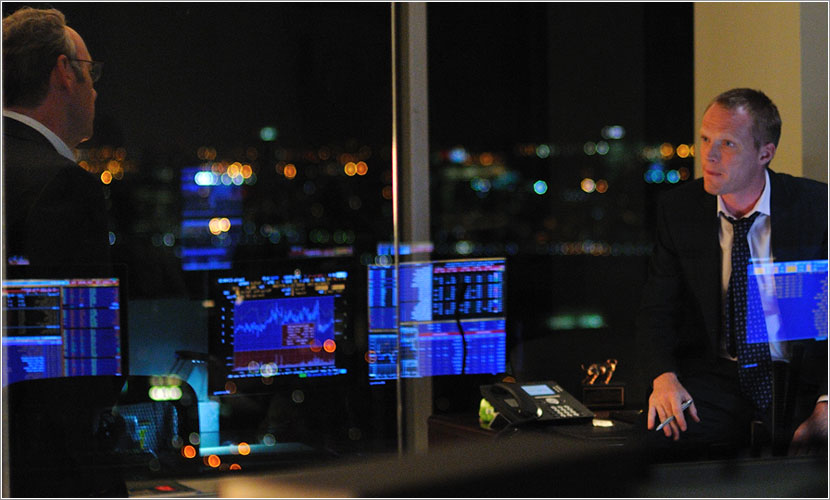 Writer and first-time director J.C. Chandor has done such a remarkable job in these few scenes to set up the entire situation, that despite the terrifying encounters we know must occur throughout the rest of this story, we can now almost sit back and watch—with some comic relief—how this truth plays out as the evidence slowly makes it way up the corporate ladder, where each person of high rank knows less than the one before him. Sullivan calls back his junior partner, Bregman who confirms his findings. Together the two call in the not very bright street-fighter Emerson, who demands they find the now missing Dale, and takes the information up to his supervisor, Sam Rodgers, Head of Sales and Trading (Kevin Spacey), perhaps the most likeable and conscience-stricken of the all this film’s characters. Rodges, who has been with the firm nearly longer than anyone except the company’s CEO. We first meet him in tears as he suffers the loss of his dog from cancer, and he receives the information with all its due terror, recognizing that, despite whatever decision they make that night, it will change everything for everyone.


Jared Cohen, Head of Capital Markets (Simon Baker), a self-loving body obsessed invidivual involved in wheeler-dealer international deals recognizes the implications without really being able to understand the consequences. Chief of Risk Management, Sarah Robertson (Demi Moore) has long recognized the consequences, and has even warned of the implications previously, but has refused to admit the reality of the situation actually taking place. Even the fact that she has warned against it will ultimately be held against her, as she finds herself, in the end, asked to play the company fall-guy. By slowing his film down and restating, in each time in slightly different terms, what the problem is, difficult for those not in finance to understand,  the director allows us to engage with each of these rather despicable figures. Yes, they are all greedy, and they would kill each other to keep their positions in the firm, but they are also all very human, very much like business men and women in every field of endeavor. Even if we do not want to quite admit it, they are visions of people somewhat like us, men and women trying to find and maintain the good life. 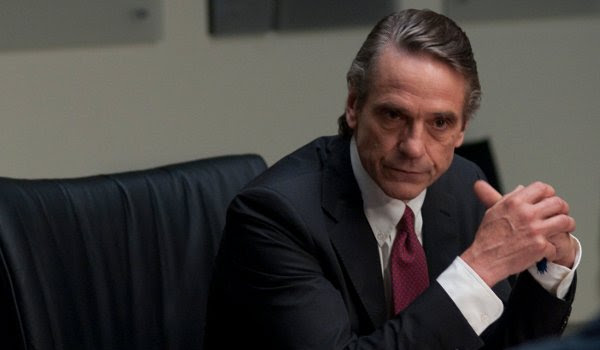 The sound of a helicopter announces the arrival of company CEO, John Tuld (a reminder, obviously, of Lehman Brother’s head Richard Fuld) brilliantly acted by Jeremy Irons. Tuld knows little of what Sullivan has actually discovered, despite the fact that he has intentionally created the very circumstances in which this situation could occur, while denying that he has ever “cheated.” His job, he assails, is not to know the details of company actions, but to imagine a future in which the company can continue to survive and financially exist. Although every individual introduced to us has already perceived the only choice with which the company is faced, none of them has the effortless disdain of the human species that Tuld exudes. For him, everything can be reduced to an inverted truism, a kind of illogical maxim that justifies his acts. Even destroying his own customer base by selling them bad products and, in that process, destroying his own company and the lives of thousands throughout the United States and abroad is preferable to losing the lionized position as the man at the top; beside, he knows that no matter how much money is lost, how many lives are destroyed, the company is—as we later learned in reality—too big to be allowed to completely fail, that, like a phoenix, it will rise again. Besides, he will receive a whopping bonus for just having remained at the helm.
In one of the last scenes of this emotionally tense film, we return to the men and women shackled (a bit like the oarsmen in Ben Hur to the chains of a Roman warrior ship), who knowing they are losing everything, friendship, admiration, self-respect and their own jobs by selling out the bad company wares to the very customers who have previously lined their and the company’s pockets. How do such individuals return home to look into the faces of their family’s that night? one can only ask.


The fired Dale is rounded up, and told that the company will destroy his benefit package if he does not return to the company to serve as another head to be rolled out to trustees and government inspectors. For a moment, even the long-term denier Sam Rodgers, realizing that he does have a conscience, rushes up to confront Tulde, demanding to be let out. Tulde threatens him with withholding all his benefits. What is an individual to do without the money to pay for his new house? By film’s end even the for rocket scientist, Sullivan, offered and accepting a promotion in the company, has been corrupted.


This sad film ends with Sam, having returned to the home in which once lived and where he his ex-wife continues to reside, is found digging the yard in the dark. Earlier he has told a colleague how he began life as an engineer, building a bridge between two local cities that saved the citizens of the regions thousands of hours of automobile time in their daily travels. Perhaps, he postulates, he was meant to be a digger, a man who makes his mark in the world by creating a deep nothing, a hole. At least it would be something real, something you can see, he muses. Into the hole he now digs he will put something, his beloved dog, perhaps the only “thing” he has truly been able to love.


If Chandor’s film does not openly offer an alternative, I’d argue it certainly does suggest one. Surely, none of the money-loving creatures the film presents truly believe in their object of desire. They, better than anyone, realize just how meaningless money is as an actual object: a piece of paper with painted figures upon it. It is only as a kind of commodity, a symbol of something else that lures them on. Yet one by one, they proclaim—just like the Nazi soldiers and ordinary citizens after World War II—they had no choice but to do what they did. If my metaphor is seemingly exaggerated, I apologize. Yet these people—and all of the others of us—who insist upon choosing the minor and larger lies and frauds of daily business over honesty and fairness, who swindle our friends in the very process of pretending to provide them with something necessary to their lives, might well proclaim the same thing: we have no choice; it’s the way of business. But, of course, we do have choices, if only we are willing to forego, even temporarily, the reward of allegiance to that empty cause.
Los Angeles, June 5, 2014
Posted by greenintegerblog at 7:12 AM