poses and gestures
by Douglas Messerli


The plot of Jerzy Kawalerowicz’s magnificent 1966 film, Pharoah, although extremely important to effect of this film, is actually quite simple, and is almost able to summarized in two or three sentences. The young heir to the Egyptian throne, Ramses XIII (Jerzy Zelnik), is impatient to make an impact of Egyptian culture. In some ways, the young Ramses is conservative, longing for the power of the throne held by his great-grandfather as opposed to the greatly declined Egypt over which his father, and soon he will rule. The young Ramses would like a world, like that represented by Cheop’s magnificent tomb, in which great memorials as the pyramids did not just represent the pharoahs’ power, but their will. If the poor and suffering everymen and women of Egypt had to die in the process, it was because the Pharoah was the figure of power, not the people. 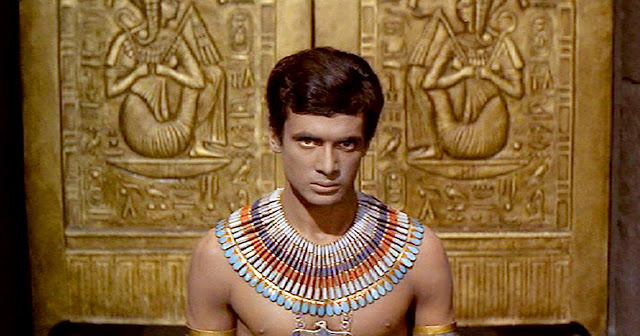 On the other hand, Ramses XIII is also a radical visionary, who, despite the positive effects in that past power brought about by the priests, now sees the priests as the cause of his country’s decline. Throughout Kawaleowicz’s study—and this film, based on a similarly analytical novel by the great Polish writer Bolesław Prus—Ramses opposes the priestly caste, ultimately openly battling with them. And, in that sense, the young warrior represents a new force upon the Egyptian landscape that has the potential to save the country and its population, as well as, which the insightful priest Pentuer (Leszek Herdegen) perceives as possible, helping with the conditions of the poorest of its people.

Ramses, however, is doomed because of this almost single-minded obsession. Unlike his wiser—but also politically ineffective—father, who practices a kind of realpolitik in which he grants some powers in his name to the priests, the young Ramses acts blindly, without the ability to analyze the intentions of his kingdom’s major enemies—the Phoenicians and the Assyrians—let alone the capability of perceiving the truly evil machinations of the wealthy priestly caste, perhaps the most dangerous of all in their determination to keep the benefits their have acquired.
Finally, the handsome young heir, who quickly becomes the Pharoah as his father falls ill and, soon after, dies, has no comprehension of how he will effected by the women he chooses. If his first love, Sara (Krystyna Mikolajewska), seems to be a loyal supporter, her being Jewish infuriates Ramses’ mother, Queen Nikotris (Wiesława Mazurkiewicz) and, given the Egyptian class system, predetermines that his son (Seti/Isaac) will be born a slave, able only to rule over Israel.
Ramses’ second choice is the Phoenician princess Kama (Barbara Brylska) who has been schooled in betrayal, and, with the help of a Greek criminal, Lykon (also played by Jerzy Zelnik), who acts as a kind of doppelgänger to the young Pharoah, later kills Sara, Ramses’ son, and, finally, Ramses’ himself.
In his final love affair, with Hebron (Ewa Krzyżewska), Ramses betrays his best friend and cousin, his most loyal supporter, Thutmose (Emir Buczacki). In short, Ramses is not only unlucky in love, but, as he proves himself to be on the battlefield, is absolutely destructive, revealing himself to be a hot-headed man of action as opposed to the beloved sage who could lead Egypt out of its indebted bondage.


What this film finally reveals is that, despite all the apparent enemies Ramses XIII must face, in the end he destroyed, at least symbolically, by himself—by his own inexperience and immaturity.

If that were all to Kawalerowicz’s film, however, I think we might not be discussing it here. The political and social issues of this work, while certainly fascinating, hardly can do justice, one immediately realizes, to the mythos of rulers and  landscapes that have already proven to have great entertainment value through movies such as De Mille’s The Ten Commandments and Mankiewicz’s failed Cleopatra, screened just three years before. Certainly the Polish director’s film might readily be recognized as more intelligent, but even in Ramses Egypt is less grand than his predecessors, viewers still demand some pomp and circumstance. The problem, obviously, that Kawalerowicz faced, despite his grand budget (and larger-than-life problems with location)*, was how to give audiences a sense of glorious grandeur without simply turning his work into grandly set costume drama. His solution, indeed, is quite ingenious.


The director certainly does not disappoint in his presentation of gruesome manifestations of epic sword play, but he contextualizes these in a kind of realist presentation of events. Instead of using thousands upon thousands of extras to crowd his desert landscapes, Kawalerwcicz, on the advice of reliable scholars and Egyptologists, uses costumes and weapons that are authentically close to the historical period, and shows us what might be described as something nearer to the actual size of the warring battalions. The troops presented here are rather small ragtag groupings—something closer to what such “legions” might have been—in which war was fought in crude battles won by the numbers of dead on each side. Rather than presenting us with magnificent troupes outwitting one another in clever advances and sidereal sweeps, Pharoah’s soldiers go bravely forward against a barrage of thrown and catapulted rocks before the final implanting of knives into the survivor’s guts. These wars are not glorious but mean skirmishes that do little but wreak havoc on both the winning and losing sides. At one point, in fact, we are sure that Ramses has lost a battle with the Assyrians, only to discover—as much to his surprise as ours—that he has won.
Against this diminished realization of battle, however, Kawalerowicz choreographs, throughout his film, flanks of soldiers, priests, citizens, and even onlookers in frieze-like positions, where the on-screen characters simply stand still, flanking royals such as Ramses, clothed in beautiful robes and displays of jewels,  Within temples, the director moves his camera forward within narrow confines, similarly flanked by bowing retainers and servants, taking us with it into chamber after chamber after chamber until we reach the very heart of power in the Pharoah himself. Similarly, we explore the dark grotto walls of a seemingly endless labyrinth mostly in the dark, until we reach, almost a reward our probing efforts, a room filled with glowing cubes, caskets, and containers made entirely of gold. If battle is presented as a thin lateral positioning of men against the landscape, the Egyptian capital and its halls of power are balletically conceived as head-on performances within cramped spaces. Here songs are sung (by Sara and others), real dances are enacted (particularly by Kama), and the royals are displayed as if they have been turned into grand statuary or even still photographs.
It is this very artificiality and theatricality, reminding one somewhat of the emblematic scenarios of Sergei Paradjanov, that transforms what might have been a sword and sandal spectacular into a stately cinematic masterwork. Just as his hero seeks to rid his citizens of their slavish adoration of the magic and hokum (including, in this case, a priestly calculated eclipse), so Kawalerowicz dares his audience to conceive a world through the lens—probably all it could offer itself within its own time as well—of poses and gestures. This is a “picture,” the director keeps reminding us, of a long lost world, a simulation of a small place on our planet in the 11th century BCE, which had little in common with us except for the human dilemmas with which it was faced.
*The original press kit of this film recounts that the production costs of Pharaoh outstripped those of any other film ever made in Poland. Shootings in the desert of Uzbekistan’s Kisil-Kim exacted nearly unable conditions of deaily heat, with vipers and venomous insects springing out at its actors and extras from yards away. The production “team had to journey the 20 miles which separated the location from the headquarters in Bokhara. For a period six months the director oversaw 2,000 Soviet soldiers and hundreds of other extras. “On the average, 10,000 bottles of soft drinks were needed each day. The properties and equipment were brought from Bokhara in 27 trucks. The wood for the Pharaoh’s palace and the Ptah temple was procured from the Siberian forests, transported from a distance of over 1,200 miles. The film itself had to be kept in cold storage to protect it from temperatures that often reached 176° Fahrenheit.