New York Times reviewer Bosley Crowther, a man with whom I seldom agree about anything, certainly got it right when in 1940 he described Hitchcock’s Foreign Correspondent as “over the edge,” which today we might restate as “over the top.” Crowther summarizes it nicely:

Never, we venture to suspect, has there been an American


New scout abroad who got himself so fantastically involved


in international monkey-shines as does Mr. Hitchcock's


bewitched and bewildered Joel McCrea. And never, we


know for a fact, has Mr. Hitchcock let his flip fancy


present case. Instead of a young reporter covering Europe


methodically for his sheet, Mr. Hitchcock is giving us a


picture of Europe—or, at least, a small but extremely sinister

The gang of at least five credited and uncredited authors (including Charles Bennett, Joan Harrison, James Hilton, Robert Benchley, and Ben Hecht) conjured up enough coincidental events in this film that by the end we nearly lose touch of some of the main elements of the plot. In the early part of the movie the central figure seems to be the shadowy World War II Dutch politician Van Meer (Albert Basserman) whom our hero, the rookie American foreign correspondent Huntley Haverstock—alias Johnny Jones (Joel McCrea)—coincidentally meets as he shares a car ride with the celebrity to a luncheon sponsored by the International Peace Society. That accidental meeting is crucial, since soon after Van Meer, suddenly a no-show at the luncheon, is shot and killed on his way to a conference which will reveal whether or not Europe will go to war. Although the old man does not seem to recognize our young correspondent just before he is shot, Haverstock witnesses, quite close up, the murder and, throwing caution to the wind, chases after the fleeing murderer. 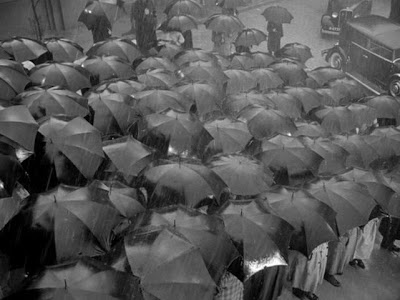 At that previous luncheon Haverstock (also accidentally) meets a beautiful young woman, Carol Fisher (Laraine Day) who he believes is the publicist for the Peace organization, but is actually the intelligent daughter of that organization’s founder, Stephen Fisher (Herbert Marshall). Again by coincident—the element that connects all this film’s incredible events—the car he overtakes in order to follow Van Meer’s supposed murderer contains Carol Fisher and another young reporter—who soon becomes a central figure in our story—Flolliott (George Sanders). The entire chase—one of Hitchcock’s most wondrous displays of his cinematic mastery (for much of the pre-car chase we observe the progress of the chaser and the chased merely through the movement of unfurled umbrellas)—ends with the near miraculous disappearance of the assassin’s car outside of a rustic Dutch windmill.* While both the police and Haverstock’s new friends move on in frustration, the rookie reporter stays on, observing the windmill’s sails suddenly moving in the opposite direction—a signal, we soon discover, for an approaching plane to land in a nearby field (recalling the comings and goings of a plane in North by Northwest) 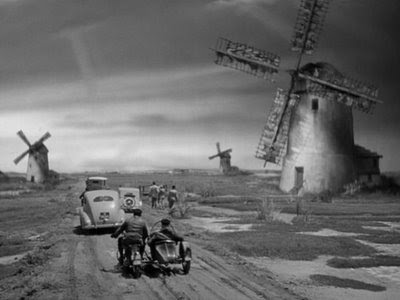 Dauntlessly, our young adventurer enters the mill not only to discover the missing car wedged in a ground-level parking garage, but a gang discussing their mysterious plans. In a side room Haverstock enters a very much alive Van Meer, now, however, drugged and unable to reveal what he knows except through cryptic references to birds (obviously a hint at his soon-to-be flight).


What our young Quixote has uncovered, so early in Hitchcock’s story, is the existence of an underground Nazi organization who will soon intend to extract secret clauses from the proclamation Van Meer was about to reveal at the conference. But by the time he convinces the local policeman and his returned friends, Carol and Ffolliet, to check out the mill, everyone has disappeared. Even the car has been whisked away. As in so many Hitchcock works, all evidence—except for the fact that an itinerant man found sleeping in the mill, inexplicably rubs his hands in the soil—has been obliterated, and (like Roger O. Thornhill in North by Northwest and Manny Balestrero in The Wrong Man) Haverstock is completely discredited. 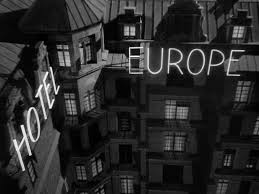 In fact, one might almost see Foreign Correspondent as a kind of early playbook in which Hitchcock tries out cinematic maneuvers which he will employ in later of his films. And, in that sense, we might almost see the 1940 film—his second American production—as a kind full-throttle exploration of devices that might work to sustain his audiences’ interest.
Soon after, Haverstock’s life is threatened by the sudden appearance of spurious Dutch policemen at his hotel room; recognizing that his phone line has been cut, the reporter (like John Robie in To Catch a Thief) suggests that he should shower, escaping through a back window to play out another of Hitchcock’s brilliant, if a bit unsubtle, shots: as Haverstock makes his way around the ledge of his hotel, Hotel Europa, he accidently dislodges the “el” of the hotel’s neon sign—signaling to all that Europe has suddenly become “hot.” Whether the director means that politically (which he certainly might) or sexually (since Haverstock is dressed only in a bathrobe and is about to break into the bathroom of the woman he now loves, Carol), we are not certain.


He and Carol escape the villains (through a gathering of hotel employees in his room that recalls the stateroom convocation of staff in the Marx Brothers’ A Night at the Opera) taking a ship back to England and her father. On board the two declare their love for each other, proposing almost simultaneously to one another.


Once in England, the story seems—at least for a while—to turn in another direction, as Haverstock suddenly discovers one of the Dutch windmill villains, Krug (Eduardo Ciannelli) at the Fisher’s breakfast table. We now recognize that Carol’s father, the founder of the Peace organization, is actually at the head of the Nazi organization. But Haverstock, still presuming him to be innocent, reports his knowledge to Fisher, who, in turn, hires a man (Edmund Gwenn), presumably to protect the reporter, but in actuality, to kill him. 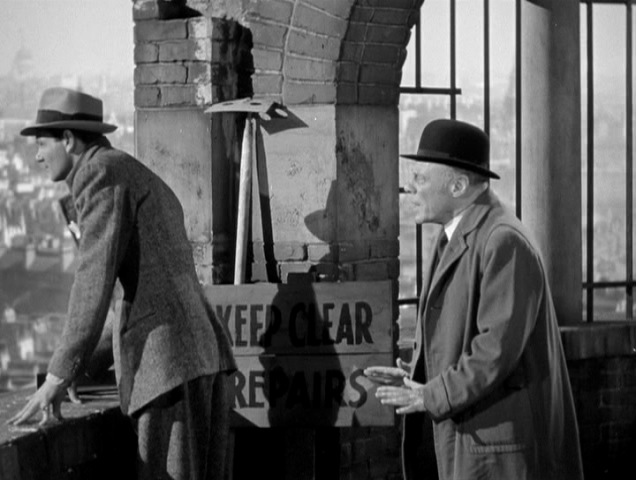 The long scene atop of Westminster Cathedral, while the “protector” plots to push Haverstock to his death, calls up several similar situations from Hitchcock’s films, including Suspicion and Vertigo. At the last moment, as he rushes forward to lunge at the reporter, the murderer himself falls to his death—although the director wittily suspends this information for a few more moments.


Later, after Ffolliett again shows up, he reports that he suspects Fisher of being involved with the German cause. To help in revealing this fact and in hopes of uncovering the location of the missing Van Meer (remember him?), the two plot to “kidnap” his daughter by taking her away from London while implicating her in a kind of hostage situation. While the soon-to-be married couple enjoy their day and afternoon in Cambridge, things get sticky when Ffolliett, unable to reach Fisher, suggests that Haverstock will have to keep her there overnight. Overhearing her fiancé’s attempt to obtain a second room, Carol, convinced he is attempting to force her into a sexual situation, angrily returns to London, agreeing to return to the US with her father the following day.


Despite this unfortunate turn of events, however, Ffolliett is able to follow Fisher’s car to the backroom construction site where the Nazi’s have taken Van Meer. Tortured by music, played day and night, and bright lights shined 24 hours into his face, Van Meer seems almost ready to reveal the hidden passages of the treaty to Fisher until, unexpectedly, Ffolliett shows up, insisting that Fisher is no friend of Van Meer’s. Haverstock and his fellow correspondent, the inept Stebbins (Robert Benchley), show up moments later, only to find that Van Meer has been spirited away—this time, however, to a safe clinic, where he will be protected and detoxed (reminiscent of Alicia Huberman at the end of Notorious).


The film, now free of the Dutch politician, flies free via a scene within a plane to the US, with Carol and her father as well as Haverstock and Ffolliett aboard (in a scene that the director uses again in Torn Curtain). Fisher’s interception of a message meant for Ffolliett reveals that he will be taken into custody upon his arrival, and, having now to face his betrayals, he admits his German allegiance to his daughter, soon after which the two news reporters reveal themselves as being aboard. Carol, still believing the worst of Haverstock, does not greet him as a friend and now, even more so, because of his involvement with her father’s exposure, is indignant; that is, until the plane begins to be strafed by a German submarine, which eventually results in the plane’s crash. In the final scenes of the very convincing depiction of terror as the plane goes down over the ocean, we find Carol, her father, Haverstock, and Ffoliett, along with a few others, clinging to a piece of the plane’s wreckage (a scene which has some quick parallels to Hitchcock’s Lifeboat). When the others are not looking, Fisher slips into the water and his certain death.


Now aboard an American rescue ship, the survivors are told that they cannot phone out any information concerning their downing—except to express their safety to relatives. Calling his editor in New York, and leaving the phone hidden off the hook, Haverstock relates his experiences with Van Meer, Fisher, and their plane’s crash to the captain in pretend protest, permitting his New York newspaper to get the greatest story of the day!


The tacked-on last scene moves yet in another direction, as Haverstock, accompanied by who he now presume is his wife, begins his night report from London to his American audience. When the sirens intervene and the lights go out, he delivers an all-out plea for Americans to remember their English friends being bombed in their homes, an effective propagandist piece that even German propagandist Joseph Goebells recognized as a masterful conclusion to the film. 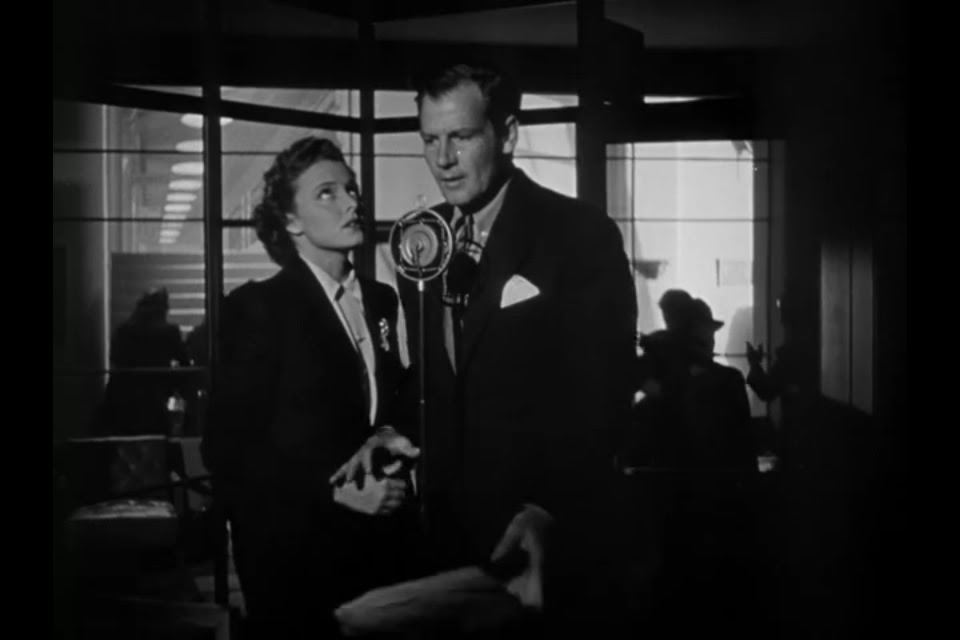 If Foreign Correspondent, accordingly, is often unbelievable, nearly incoherent in its multiple plot shifts, and a baggy monster in its quick shifts from comedy to thriller, drama, adventure tale, and full-out propaganda, it is also a kind of joy ride for any audience willing to take the voyage as this masterful director tests out some of his best filmic tropes, a field he would mine for the rest of his life.

*A humorous scene during this chase involves a local man who attempts to cross the road, upon each attempt encountering yet another vehicle until, in frustration, he gives up and returns home, a situation repeated in Hitchcock’s To Catch a Thief.