laughing before you tell the joke


Sometimes—if nothing else to demonstrate to those who love popular culture as much as I don’t, that I’m still living—I review films that seem out of the bounds of my taste. My spouse Howard insisted the other day that I accompany him, for his second viewing, to Phil Lord and Christopher Miller’s redo of their previous comic success, 22 Jump Street. Although I attempted to dissuade him from demanding my participation, I know that when he bows his head in stubborn insistence, claiming that I never share things he enjoys, that I best hang up my high hat and go along with my endurance-tested grin. 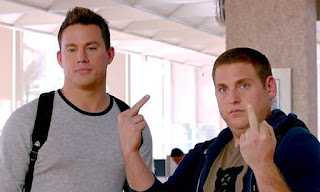 When he asked, when the movie came to a close, “What did you think?” I fantasized I would answer “Well, I’m just not that much into adolescence.” Fortunately, neither are the directors of this manic comedic event. Of course, they actually are very much into both adolescent behavior and the well-worn humor it elicits. But, as they do with nearly every aspect of their purposely predictable sequel, they make quick fun of it and themselves ahead of time just so, if nothing else, they can flow guiltlessly forward. True, sometimes they overplay their self-parody to such a degree that it almost wears one out; one more line about how the police honchos (read studio heads) wanted a complete redo of 21 Jump Street (a movie which I did not see, but probably should have before dipping into what will surely now become a franchise, a fact which the movie again satirizes at the other end of its reel), I feared I might have to excuse myself for a trip to the john. But then, exaggeration is also on this movie’s bucket list, beginning with its first failed caper, where the absurd undercover police duo, Morton Schmidt (Jonah Hill) and Greg Jenko (Channing Tatum), attempt to arrange a sale of illegal goods with the villainous Ghost (Peter Stormare), an act of such momentous failure that it results in an octopus being flung into Schmidt’s face, and, with cartoon-like comic conclusion, the two being hit head on by the bar of a crane, toppling them from the roof of a semi-truck. If the scene is funny, it almost serves, more importantly, as a kind of preview-warning: yes, this duo is bound for lots of such dumps, but we won’t show you anything else quite as stupid as this.


The couple—or in their undercover jargon, “the bros”—instead, are sent off to college, this time, instead of to a correspondence institution, to a “real” university where they will be asked to play, as unbelievably as possible, two freshmen. That they are “narks” is immediately apparent to everyone except for themselves. “I’m the first one in my family to pretend to go to college,” gushes Jenko.


Their mission, now that they have accepted it, is to find out who is the on-campus drug dealer selling a new version of what appears to be a kind of super-active Speed, WHYPHY, which offers an intensely cogent four hours before letting those who ingest it down with a bang so powerful that it has killed a young coed. When the two cops accidently check out its potency, they end up in split-screen dreams, Schmdit, predictably, locked into a weird alien landscape while Jenko skips and dances (in Magic Mike-like swivels) within a pleasant sunlit pasture, determined, at one point, to join the white puffs of cumulus clouds.


The campus location allows the writers and directors a wide range of opportunities to offer up a whole series of predictable institutional objects of derision, including student dorm accroutements, poetry-slams, fraternities, sports, and sexual misconduct that has existed for even before the time-honored Animal House. Fortunately, the creators of 22 Jump Streets seem to find many of these jabs at higher education a bit passé, and quickly drop their spoofs almost before they have revealed them.


Schmidt easily scores with the beautiful former roommate of the over-drugged girl, Maya (Amber Stevens), who just happens to be police chief Captain Dickson’s (Ice Cube) daughter and, fortunately without even winking, Black. But Jenko’s love interest is far more interesting. If at first we are led to believe that he has met up with his boyhood fantasyof playing football—this film’s central joke about adolescent infatuations—we soon discover that the directors have something else up their sleeves. And as quickly as we perceive


that the real object of his desire may be the frat football quarterback  Zook (Wyatt Russell), with whom Jenko has, to use the romantic cliché, “so much in common,” we began to comprehend that at the very center of this Lord-Miller concoction is not just the obvious tried and true “bromance” that has become so popular in such commercial laugh vehicles, but the understated truths upon which that genre is based. Here, for one of the first times, cinema not only asks someone like me to “read between the lines,” but demands it, depending upon everyone’s knowledge that the central male figures of this tale, although not really homosexual, are living their lives as if they were gay.


Not only do the “brothers” continuously suggest that the relationship of two heterosexual opposites (which critic Manola Dargis correctly characterized as Tatum’s verticality perfectly balanced with Hill’s sphericality) is something other than it seems—in one scene with the hilarious twin brothers Yang, attempting to demonstrate their commonality by simultaneous reciting the same words, Schmidt and Jenko repeat the sketch by simultaneous spouting words that are complete opposed—but they, intentionally and unintentionally play a loving couple on the verge of a breakup and makeup throughout the film. If at first this may seem to be just another way of satirizing “faggots”—the word Ghost uses to describe the couple who, caught spying in the library, pretend to be engaging in oral intercourse—in the end, both writers and actors convince so effectively in the sincerity of their on-screen relationship that, in the end, it truly doesn’t matter; in such an unlikely intensity of friendship they might as well really be gay.


And then there’s the other man, Zook, with whom Jenko is able combine those high school fantasies with those prepubescent sexual urges both of which he apparently has never outgrown—despite the fact that it first appears that Zook is behind the distribution of the potent drug. It’s not just a word game to confuse the name Cate Blanchett, as does Jenko, with the word carte blanche (meaning the freedom to act as one wishes).


The film has great fun with the two men’s intense weight-lifting workouts which sound (at least over Schmidt’s snooping hookup) more like sex than sex. When the two complete a football pass, they are appear to be more satisfied than any coupling beasts.


Let us just say that in 22 Jump Street the writers have created more metaphors for male sexuality than any gay movie might even have imagined, strangely anchoring their work in this easy-to-manipulate trope. Which makes it even stranger, it seems to me, that not one critic I read, despite their reference to “bromances,” actually defined the patently obvious content of the movie. If nothing else, films like 22 Jump Street reveal conclusively that times have changed. What used to be suggestive content or even outright raunchy, is now, clearly what sustains and makes this movie so very likeable.

By work’s end, after miraculously uncovering the real drug dealer, Maya’s roommate Mercedes (Jillian Bell)—whom Schmidt violently encounters in a series of slap and punches that hint at yet another possible sexual possibility in its S&M-like pushings and pullings—and saving the day through one more outrageous gay sexual grope (Jenko is forced to reach up and into the pants of his “bro” in order to pull out a grenade he tosses up into the heliocopter from which they are hanging [I promise, it’s really what happens!]) our two action heroes kiss and make up, having, as they put it, gone down in the annals (pronounced “anals”) history—cartoon history at least). Even Zook recognizes the inevitability of their (and perhaps our) love emanating from their frictional bonding.


I wouldn’t go so far to suggest that 22 Jump Street, as does San Francisco Chronicle film reviewer Mick LaSalle, could be a cultural event that, over time, might be seen like the French film critics’ later recognition of the works of Howard Hawks and Alfred Hitchcock. For me, this postmodern jumble more closely resembles the precociously pre-postmodern “road movies” of another odd duo, Bing Crosby and Bob Hope—even if surely it would only bring groans from the young audiences gurgling at the antics of Hill and Tatum. Or then again, it reminds me a bit of the humor of long-dead comedian, Red Skelton, who often laughed at his jokes before he told them.
Los Angeles, July 6, 2014
Posted by greenintegerblog at 8:33 AM