a life made of moments


Richard Linklater’s Boyhood, in many respects, is unlike any previous film. Centered upon a young boy, Mason Jr. (Ellar Coltrane), as he grows up from a child to a young man going off to college, the film was shot over a 12 year period, using the same actors. Coltrane, accordingly, along with his fictional mother, Olivia (Patricia Arquette), father, Mason Sr. (Ethan Hawke), and sister, Samantha (Lorelei Linklater), each age as the movie progresses across the more than a decade it took the director to film them and his story. 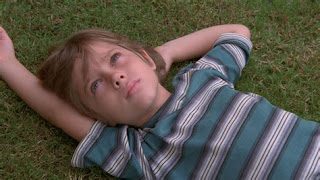 Linklater’s script, moreover, seems to be written in the form of a fully realized plot, with the narrative turnings of windings of imaginative prose, but was, in fact, created by the incremental changes that occurred in the lives of Coltrane, Arquette, Hawke, and the director’s daughter in the interim between each filming session. The director insisted that nothing might occur in the character’s lives—particularly in the life of the boy at the center of his work—that did not actually happen in his off-screen life.


Of course Linklater was taking wild chances in filming in this manner. Any one of the central figures of his film might have died or been seriously injured during the years of the film’s making. And, even more importantly, the central figure, Coltrane, who begins a wide-eyed child of seeming wonderment, might have grown up to be a drugged-out kid with little cinematic presence, without much a “story” to tell. Or, even more likely, the boy might easily have grown into an absolutely normal young man, so boringly straight-forward that the serially-created film would fall apart. Although mothers and fathers may be absolutely fascinated by the details of their children’s lives, most of us looking in from outside would likely be mystified and utterly disinterested in the life of an average daughter or son. If Linklater’s own daughter, for example, might have been at the center of his film—although it me pains me to say this—the film might have produced primarily yawns. 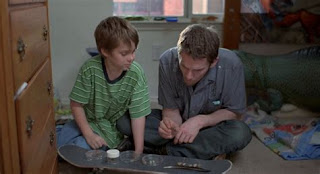 There is absolutely nothing wrong with the character of Samantha or the actor Lorelei; particularly in the early scenes where she tortures her younger brother simply my imposing her presence upon him, the young Linklater is a fine actor; but, at least in the film’s fiction, she grows up to be such an absolutely normal girl, without any of the trauma-produced hysterics that are perhaps necessary to create a significant cinematic character.


The Coltrane character also seems to have grown up with the usual boyhood tribulations— somewhat abusive stepfathers, an over-busy mother, an often missing father, and a painful brush with love—to become, nonetheless, a rather well-balanced young man. But the actor behind him represents something deeper; a would-be photographer, he looks at the world around him with more questions than answers, with more reservations and fears than with optimistic pluck. And, as such a being, the camera and the audience cannot help but dote on him. By film’s end we don’t know what kind of man this teenager will turn into, but we believe in him and hope for his future. And that the director had the intuition and determination to explore this young man’s growth against the background of his fictional family attests to Linklater’s brilliance. 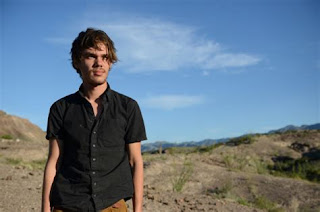 Finally, what hasn’t been sufficiently written about in the almost entirely positive reviews of Boyhood that I’ve read to date, is that Linklater has had the adventurousness, the audacity to develop his film without a true “story” or “plot.” Many critics have pointed out that “nothing truly happens” in this director’s film. But few have extended that to describe that this work not only has no narrative in the ordinary sense, but is so truly “ordinary” that it almost does not read as fiction. As my companion Howard kept repeating, after seeing this film for his second time, “It was hard for me to perceive it as a film that really had a script.”


In fact, Boyhood isn’t really a fiction by any standard definition. It begins simply with a young child looking up into the clouds and ends with a young man looking across a beautiful canyon landscape at sunrise. In between are “events” and, most importantly, “moments” of what pretend to define a life. Such “moments,” as the hard-working Arquette proclaims near the end of the film, are insufficient, so it seems, to represent lived experience—something which narrative fiction aspires to and pretends to convince us we have encountered. Linklater’s work is artless in the sense that it makes utterly no attempt to “pretend” a reality. Using the idea of “frame”—both the frame of a film and the frame of a photograph—this director shows us what the great French philosopher argued was the way we truly experience duration (durée), the actual flow of life. If in reality life is a constantly shifting, alternating flux of moments, each instant utterly transforming the previous and the very next, we experience that flux slowed-down as a series of “moments,” which, with memory, we pull together a kind of stitched together notion of our own lives. 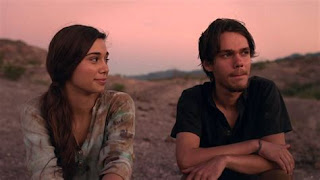 When we truly reflect back, of course, we know our lives cannot have been so threadbare, so clumsily experienced that we have lost most of our time on this earth; and that feeling—as Proust insisted—leaves us with a sense of utter desolation as time passes. Where did our lives go? we ask ourselves. How can we get it back? Surely all those days of dreaming and loving and working and hoping cannot now be defined through a kind of memory scrapbook presentation of favorite, unfortunate, and even happenstance events? Yet, there we are, near the end of lives, suggests Linklater, with some of those photo-like opportunities even now fading from our minds.


We know, however, instinctively, that this director’s vision of life is a true one, the way we experience our own lives—even at those very moments when we try hard to “seize the day.” The young women and men at the very end of Linklater’s profoundly painful film suddenly realize that it is nearly impossible to “seize the day,” to grab hold of and live in the now of life. And they sense the tragedy in that. They recognize the emptiness which, like Mason’s mother, they will one day have to face. But they also realize something quite marvelous, that fortunately life does not depend only upon their willful projection of self upon the world, but that the world itself sometimes seizes the individual, that what we see and experience around us often defines our life as surely as all of our intentional and unintentional acts. Beauty, nature, a communal sense of well-being, however we might define art, it is sometimes—maybe more often—what frames and transforms our fragmented memories of life than do our everyday activities.


For those of the audience who are receptive to that truth—and it appeared to me that most of the theater-goers with whom I sat through Boyhood’s nearly three hours were more than receptive—a film such as Linklater’s, in its stately yet homely questioning of what defines a life, will surely join with the remembered images that help to tell us who we are.


If Boyhood is not a great film—as I would argue that it is—it is surely a necessary work of art.