Edward Dmytryk | Christ in Concrete (a.k.a. Give Us Our Daily Bread)

Ben Barzman (adaptation and screenplay from a novel by Pietro Di Donato), Edward Dymtryk (director) Christ in Concrete (a.k.a. Give Us Our Daily Bread) / 1949
Rod E. Geiger’s British production of Give Us Our Daily Bread (USA Christ in Concrete) must have appeared in 1948 to the four Americans blacklisted by the Committee for House Un-American Activities—director Edward Dymtryk, actor Sam Wanamaker, screenplay writer Ben Barzman, and composer Benjamin Frankel—a project impossible to pass up. None of these talented filmmakers could find jobs during this period in the US. 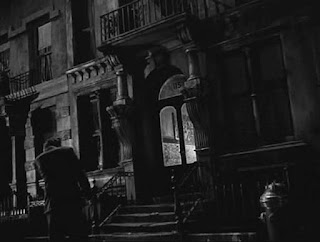 Despite the rather melodramatic elements of the original novel, written as Christ in Concrete by Italian-American writer Pietro Di Donato (published in 1939), who based it on his father’s death in 1923, the team clearly perceived in it the theatrical and social elements which they had often sought out in their own art.
In the remarkable first scene of the film—in which a nearly indecipherable figure stumbles across a black urban landscape before ducking into a tenement building, and drunkenly lurching forward, floor by floor, in what seems like an interminable struggle to reach his own apartment—reveals, once more, just how influential German Expressionist film was in the creation of the American film noir tradition. And even the opening credits, closing in on a scene of the same tenement buildings from its back yard, suggest the director’s ties to Italian neo-realism in this film.


Once that obviously drunken, clearly desperate man reaches his domicile, breaking down the door to enter, we realize that we are witnessing the near-end of a tragic set of circumstances—the failure of a marriage, a family, and an American dream—that the rest of the movie, in a slow spiral back to beginning of events, will reveal to us over the course of the film’s nearly two hours.


In many respects, as New York Times critics Bosley Crowther correctly summarized in his original review, the makers of this film have made an “earnest attempt to capture the hard yet wistful quality of Mr. Di Donato’s tale.”


They have set the poignant story of the bricklayer's struggle to


acquire a home for his wife and family in surroundings


which have the cluttered look of the lower East Side of


cafes and the union halls and constructions at which bricklayers


spend a lot of time.

Throughout, the actors, particularly Wanamaker (as Geremio) and Lea Padovani (as his wife Annuzaluta), but along with the strong support of Charles Goldner (as Luigi), Bonnar Colleano (as Julio), and William Sylvester (as Giovanni), watchable and, at many moments, believable. As observant critics have noted, Barzman and Dmytryk recreate memorable moments—the arrival by ship of Annuzaluta, the family meals when Annuzaluta carefully dilutes her children’s portions of wine, the purposeless actions of the superstitious midwife tossing salt and herbs into the corners of the pregnant Annuzaluta’s bed, and many of the barroom scenes in which Geremio and his friends celebrate and commiserate their fortunes—all help to create a sense community that almost convinces us that the film is actually exploring the fates of immigrant laborers in early 20th century American turmoil.


But, in the end, I have to agree with Crowther’s conclusions that  these set pieces can’t keep us from the realization that the delusions, human failures, and simple inabilities of the one family upon which Christ in Concrete focuses do not total up to the tragedy its creators claim for it.


Perhaps the most flawed aspect of this simmering tale of American blindness and injustice, is Annuzaluta’s peasant demand that she will travel from Italy to America to marry Geremio only if he has a house. In the early waves of New York immigration, perhaps, such a requirement might have been seen as a ludicrous if admirable carrot-on-a-stick. In the almost universal squalor of tenement living, such a seemingly unattainable goal might be seen, as the film would have it be, as part and parcel of the American dream. After all, hadn’t that been the dream of most urban Americans throughout the early years of the century?


By 1949, however, when this film appeared, so many Americans were suddenly realizing that dream that in a few years whole suburban communities would sprout up to utterly change the American landscape, bringing some of the same squalor of city living to previously polished downtown edifices. Whole areas of once vibrant immigrant neighborhoods were being abandoned for the look-alike wooden boxes on cement-lined avenues on the outskirts of dying towns.


Today, after decades of returning refugees from these truly sub-urban territories to those previously forbidding brick and mortar edifices, Annuzaluta’s dream of a Brooklyn home seems oddly as bourgeois as the re-gentrification of that same New York borough today.


One might overlook this plot complication where it not so central to all the actions of the film’s plot. Annuzaluta’s demand and Geremio’s determination of achieve takes up so much of their interactions with each other and their friends that it becomes a kind of fixation that simplifies and flattens out any real complexity of their lives. In fact, the family seems to have the possibility of joy and pleasure in their binding love. Even when the dread depression takes away employment possibilities, because of their careful scrimping and saving for the intangible object of their desires, Geremio and his family are far better off than others of his friends, whose wives are sick and children are starving.


Yet Dmytryk and his story, in its straight-laced focus, demands that we single out Geremio as a kind of “Christ,” a man who suffers nearly everything for his and his family’s salvation. Presented more as a Job than a Christ, Geremio is also palpably human in his temporary abandonment of his wife for his former love, Kathleen (Kathleen Ryan)—a relationship doomed, at least from the audience’s point of view, from the beginning, given Annuzaluta’s saintly face and demeanor. Worse yet, we are asked to forgive Geremio for undertaking a new job as foreman for a dishonest architect friend and involving his old acquaintances in the dangerous situation of constructing a building without proper worker protections—all for the sake of fulfilling Annuzaluta’s dream.


That Geremio ultimately breaks with Kathleen and seeks out the forgiveness of his worker friends and aspires for acquittal through his macho acts of standing before every wall that might come tumbling down, still does not elevate him, I am afraid, to sainthood. Nor does his shocking, but perhaps inevitable death, as he is buried alive in a sea of cement, encapsulate him in forgiveness. Unlike Christ, when faced with temptation, he has quite regularly given in. And Dmytryk’s attempt to cloak Geremio’s horrific death in a loud confessional plea transforms what might have been emotionally shattering into a melodramatic, almost laughable mea culpa.


Similarly, Annuzaluta’s monologue against the idea of the men attempting to attach a monetary sum to the life of a man, may have seemed to the film’s makers a kind of dirge to capitalist greed, but it quick sputters into a hymn of her vulgar aspirations: finally Geremio is able to buy her and her children a house!


Given all of his many brilliant cinematic techniques, one wants to love and admire Dmytryk’s film, and to assert its value to a society that so utterly rejected it when it was first shown; certainly it deserved better than its one week appearance in US theaters, spurned, in part, because of the unconscionable labeling and dismissal of the political views of its makers. Yet, this film’s process of shifting through the dough of a singular being results in a creatively flat product that we perceive cannot even be served up as a Eurcharist loaf, let alone a staple of one’s daily diet.
Los Angeles, August 13, 2014
Posted by greenintegerblog at 8:29 AM