dying to kill
by Douglas Messerli

Wim Wenders (screenwriter, based on a novel by Patrica Highsmith, and director) Der amerikanische Freund (The American Friend) / 1977

In most of Patricia Highsmith’s works she explores how we might define the inner nature of any man. Would a well-off, much-loved tennis star suddenly be tempted to murder (Strangers on a Train)? Or, as she similarly poses the question in Ripley’s Game, adapted by Wim Wenders in his taut, moody film, The American Friend, might an everyday picture framer and astute observer of fine art agree to kill an unknown man in a local subway station and go further still to gavotte a mobster in a public train? Even more importantly, the question quickly arises, if one can go that far against one’s personal nature, where else might that take one? What else might a simple man be capable of? 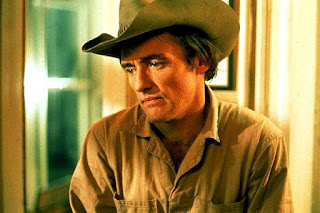 The slightly sleazy, always sinister Tom Ripley (Dennis Hopper)—a man who might be hired to do almost anything, as long as there is money in it—would never have bet that a loving, married man such as the Hamburg-native Jonathan Zimmermann (Bruno Ganz) would agree to become involved in such a brutally meaningless act as destroying the life of a man he has never met or even heard of. Ripley’s current scam is somewhat innocuous, as he shuttles between New York and Hamburg, couriering new paintings by the formally dead, but unceremoniously still-living, German artist Derwatt (Nicholas Ray) from his SoHo studio back to Germany to sell them as ever-diminishing remainders of the artist’s limited output.
It is at a local Hamburg auction where he meets the art framer Zimmerman, who not only suspects that Ripley is involved in a scam with Derwatt’s work (the blue in the newest painting, he suggests, is a color different from one that Derwatt has previously used), but apparently has heard rumors that Ripley has been involved in other illegal dealings. His refusal to shake Ripley’s hand, when introduced by a mutual friend, sets off Ripley’s game, which, in turn, is at the basis of his speculation about the nature of human beings.
When a former associate, Raoul Minot (Gérard Blain)—a man to whom he owes a “favor”—asks him to kill a fellow gangster, Ripley refuses with a kind of strangely principled emphasis:

Having heard that Zimmerman is sick with a serious blood disease (the reason, he has been told, why the framer has been so rude to him), however, he determines to test the situation by suggesting the artisan to Minot.
Predictably, when approached by Minot, offering a large sum of money for the murder, Zimmerman utterly rejects the notion, shocked that anyone might even assume that he could be approached with such an absurd proposition. But when he discovers that Minot is in possession of information about his health, having heard that his condition is quite serious, Zimmerman is set into motion: first simply to discover who might have shared such a secret with others, and, more importantly, to determine whether what the unknown source has told Minot is, in fact, true. Zimmerman’s doctor has reassured him that his condition, although serious, is not yet fatal and his illness has not progressed, a statement he reiterates when Zimmerman suddenly accosts him, demanding further evidence. Another friend, the actual source of the information told to Ripley, also denies having said anything.
But the rumor, particularly regarding the severity of his illness, sets everything into motion. Minot pays for Zimmerman to fly to Paris to see another doctor, who again puts the frightened framer under a series of painful tests to determine his condition. Minot also fabricates the records, turning the rumor suddenly into a fact that Zimmerman can no longer ignore. What’s to become of his wife and young son? If he is going to die so soon, what does it really matter if he takes another man’s life, particularly a man, who he is assured, is a criminal worthy of destroyed?
Being a self-perceived moral man, Zimmerman does not take easily to the idea, even contemplating suicide before he is led through underground/underworld locations (all beautifully filmed in lurid greens, blues, and reds by Wenders) where he will encounter his target. Once there, he almost misses his prey by momentarily falling asleep, and injures himself in his attempt to catch up with his prey. At heart, it is clear, he is no murderer, and when he actually accomplishes the act, it is a clumsy affair as he shoots the man rising before him on an escalator in the back. Zimmerman’s race back down the up-moving steps reveals what will be the condition for the remaining period of his life, as he is attempts to go back against time in order to undo the consequences of his act.
But once he has entered into such atrocious behavior, in a sense the outer narrative of his  life and of the movie is over. Like any man, Zimmerman suddenly has proven that every man is a murderer; he has become a being capable of things he might never have imagined he would or could enact. And it is that inexplicable fact that creates so much confusion in Ripley’s mind, as, tape recorder in hand, the seemingly born-to-sin, secret philosophizer can no longer make sense of the world; after all, he is a man, unlike Zimmerman, who can do nothing with his hands. If the framer is a builder, a kind of creator, Ripley, admittedly, can only make money.

I like this room. It’s got a good feel to it. It’s quiet and peaceful.
Just like you. I envy you. The smell of paint and wood. Must
be good to work here. Then when you finish something, you can
see what you’ve done.

Or, as he later proves, all he can do is hit human beings over the head, strangle them, and throw them off of trains. Despite his stated “talents” (as Highsmith’s 1955 novel, The Talented Mr. Ripley, suggests), Ripley has the gift only to destroy or to take advantage of people, while Zimmerman has, through his family love, made “something” of his life. He is a “Zimmerman,” a carpenter, one who can build a room

Perhaps even more importantly, in the short time since he has first encountered the art framer, particularly after visiting him in his shop with the ruse of map that needs a frame—another contradiction in a film in which everything is presented in terms of oppositional forces—Ripley has immediately formed a bond with him. Indeed, these two men are opposites who, despite Zimmerman’s previous slight, are quickly attracted to one another, sharing ridiculous trinkets of heterosexual titillation which become almost a surrogate for what will soon reveal itself as an inexplicable camaraderie that borders on the sexual.
By the time of their third meeting—after Zimmerman has been approached by Minot demanding yet another assassination—there is so much electric energy in the room that the two can do little but point at one another and laugh, captivating Zimmerman’s young son and slightly terrifying Zimmerman’s wife, Marianne (Lisa Kreuzer). It is like the giggle of lovers in denial of the possibility of their love: “I would like to be your friend. But friendship isn’t possible,” states Ripley. Zimmerman replies: That makes me feel very comfortable.”
Clearly they are now “friends,” with every implication of that word. And henceforward in Wenders’ movie little else needs to be or is explained, even when Ripley shows up unexpectedly in the train where Zimmerman has been imported to garotte an American gangster (Samuel Fuller). Together the two make a mess of the task, killing the gangster’s two guards (or at least killing one of them and disposing of both by tossing them off the train), but apparently failing to do away with the target himself. If all of this seems a bit fuzzy in Wenders’ telling, once again, it is no accident.
And the fact that all of this takes place outside and within a bathroom--for a long space of the film the two take turns standing guard for each other in a kind of hilarious riff on what might happen if two gay males were attempting to explain their being stationed just outside the bathroom door--is part and parcel of this film’s wonderful absurdities. Nor is it any accident that, when Zimmerman returns home, he discovers that his wife and child have abandoned the place.
Soon after, having discovered that Minot’s condo has been bombed, Ripley comes by to collect his chum, whisking him off to his own mansion where he forces his now utterly terrified “friend” to stand guard in a strange buttress-like trench surrounding his estate (a kind of guarded imprisonment), after which Ripley suddenly shows up with a plate of food, reporting, “I think of you all the time.”
What they truly share, of course, is not a “real” relationship, but a hormonally-charged sense of danger; the plate of food is quickly spilled as the mobster’s henchman shows up. One by one they must do away with the henchman, the mobster, and the guard who evidently survived their attacks. To celebrate their survival and their achievements as a “team,” Zimmerman’s “American friend” becomes determined to take him on a short, final road trip to the sea where they will set afire the car with the mobster and his guard within—a kind of pyrrhic victory!
Like an avenging angel, however, Marianne suddenly shows up, forgiving her husband for all his mysterious actions, and determined to reassert her marital position by driving Zimmerman, in a parade to the ocean, with Ripley in the lead. The moment he sets fire to what clearly he perceives as the inexplicable past through which they have both just passed, however, Zimmerman resumes control, turning against his “friend,” and speeding off back to Hamburg in a kind of mad release from the insanity that had possessed him. Sadly, he doesn’t get very far before, a kind of blindness overtaking him, he falls dead.
Suddenly we realize that everyone has lied to him: his own doctors, Minot, Ripley—perhaps even Zimmerman’s own wife!  As Ripley has so profoundly admitted early in the film: “I’m confused.”
Much of this film echoes other works, including Hitchcock’s Strangers on a Train, with elements of Ray’s and Fuller’s films thrown in for fun; and The American Friend, in turn, I suddenly perceived, was behind much of the humorous tension of Richard Shepard’s 2005 flick The Matador. That is what happens, after all, with all good art.