the director of doors

Samuel Raphaelson and Frederick Lonsdale (screenplay, based on a play by Melchoir Lengyel as adapted by Guy Bolton and Russell Medcraft), Ernst Lubitsch (director) Angel / 1937

It’s strange to discover that I am writing today on this work which premiered exactly 77 years ago, on October 29, 1937. The Angel I saw yesterday, despite some rather odd aspects of Marlene Dietrich’s makeup (must her eyelids be so severely arched?) was certainly not a senior citizen, but appeared to be as young and fresh as the just slightly middle-aged folk it portrays, and the film itself literally glowed in its brightly lit sets and absolutely sparkling beaded dresses.


The script was also quite up-do-date in what has now become recognized as its directors blasé attitudes toward sexual indiscretion. In fact, there is no outward sex presented in Lubitsch’s film, there is certainly a great deal of imprudent behavior—if not even lasciviousness. 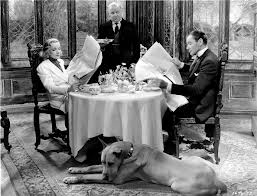 Maria Barker (Marlene Dietrich) has what outwardly might appear as the near perfect marriage, living with her famous peace-making diplomatic husband, Sir Frederick (Herbert Marshall) in their country manor, decorated with perfect taste. The beautiful, statuesque Maria, a blue-eyed blonde with “just a touch of an accent” seems the perfect blend of a sophisticated aristocrat with just a touch of exoticism. The couple appears to be so happy, as Sir Frederick quips, that they cannot even imagine a fruitful subject about which they might pretend to argue in order to demonstrate to their about-to-be-married servant, Christopher Wilton (Ernest Cossart) that marriage is not perfect.


But we know that, in fact, Maria has indeed brought up a subject that might not only cause a row, but might destroy them; the problem is that Sir Frederick is so self-centered that he cannot imagine any reality behind what he perceives as her humorous comments. Nor can he imagine that he is a bore of a husband, long unable to demonstrate to his still desiring wife that he feels any love for her.


Although she has rushed home from a one-day adventure in Paris, posting herself in his bedroom and now asleep on his bed, he dares not even wake her up, retreating, in response, to her room to sleep. The sexual implications are obvious: not only does he not take advantage of the sexual possibilities, he retreats, with a stereotypical feminine coyness, from what might be the normal masculine prerogatives.


We have already witnessed the events that are at the center of their later game of musical chairs. Visiting a former friend, the Grand Duchess Anna Dmitrievna (Laura Hope Crews)—presumably to discuss the difficulties of her and her husband’s relationship—Maria makes clear that things are not what they seem. First of all, we quickly discern, the lovely series of rooms over which the Grand Duchess presides represent a salon that might be better described as a high-class saloon, a place for gentleman callers to meet young woman or, with the help of the Grand Duchess, to make appointments with young women in a more intimate setting. In short, Maria’s friend runs a sort of high-class brothel, and the fact that Sir Frederick’s wife even knows the elderly “madame” from years earlier suggests to us—with the usual Lubitsch touch—that she may once have been one of the women with whom these gentlemen might have met.


Retreating for a few moments to another room—the discretionary requirements, quite obviously, of meeting with the busy Grand Duchess—Maria encounters a handsome visitor, Anthony Halton (Melvyn Douglas), both of whom, inexplicably perhaps, but necessarily fall in love. Although they only share a dinner, a late night drink, and a midnight park bench within the frames of the film, we realize that they might as well have shared a bed (which is, after all, what Sir Frederick thinks what really happened when his long lost friend, Tony, later tells him about his new-found “Angel.”)


The two do not even share their names, but do something far more indiscreet in allowing a possible reunion in another week. If his “Angel” returns, Tony Halton is assured she will become his love!


As in many a Lubitsch movie, the pot is stirred when, soon after, Maria spots Halton at a horse race in England, and, further complicating everything, later meets her husband, who discovers that he once shared a French cocotte with Halton during the war, both of their pictures having been displayed on their lover’s bedside table. Suddenly, what was just a night of passion becomes something much deeper, a kind of sexual ménage à trois, wherein the men have not just shared one woman, but now two! Is it any wonder that these gentlemen of class, who have never before actually met one another, become immediately fast friends, Sir Frederick inviting the other to his home for dinner?


Having already described his new friend and his new friend’s infatuation with a woman to Maria, Sir Frederick has helped prepare his wife for the event. So too is Halton given fair warning when, while the two men share drinks before her entry, he spots a photograph of Sir Frederick’s wife. Once more, Lubitsch creates an entire series of overlaying ironies, without any obvious plot manipulation giving us and the two lovers information not shared by the husband. If for the two would-be lovers the situation creates a kind of frisson, it provides the audience an opportunity, once more, to delight in the knowledge of what Sir Frederick, the stooge of this story, cannot comprehend.


And we feel that secret conspiracy between the characters and us serves him right when he unemotionally welches on his promise to take Maria on a vacation trip to Vienna, once again reiterating his utter lack of empathy, but his inability to romantically respond.


We can hardly blame Maria when, having been spurned and ignored, she plans to show up in Paris to meet Halton. And it serves Sir Frederick right when, shortly after, he gets his comeuppance when he calls Halton to say goodbye, overhearing through the phone a piece of music being played by his friend that Maria had previously played upon her piano. Suddenly he knows not only that Maria has made an unexplained trip to Paris but has met Halton there and is the very woman with whom he has claimed to fall in love! The genius of the direction is how completely understated every revelation has been. The actors need not even raise an eyebrow, let alone project a look of gloom or drop a tear! They know everything—as do we—without a word spoken.


When Lubitsch first came to the U.S., it was at the invitation of Mary Pickford who asked him to direct Rosita. Apparently, the two did not at all get on, fighting over several of his directorial decisions. At one point, frustrated with Lubitsch’s director, she quipped that he was “a director of doors.” Given the evidence of Angel, we might well agree. But that is just why Lubitsch is so brilliant. He uses everything at his disposal to convey the meaning of his scenes, a gesture I can imagine was irritating to actors determined to be the center of all the film’s expressive moments. In Angel, the doors through which Sir Frederick goes in and out are fascinatingly brocaded entries that are not only strangely cut (often round instead of rectangular) but slightly smaller than what we might expect at such a grand manor house. As the grand diplomat trips through his rooms it appears as if he is living in a “playhouse,” or a “dollhouse” in which he believes he has enshrined his Nora.


The Grand Duchess’ salon, as I have already hinted, is a palace of tiny meeting rooms, each carved out with a white-painted doorway, little different from the others, so that one never knows what might be discovered within—a lady or tiger, so to speak. It is through one such doorway that Maria discovers Halton, who, since he has been waiting for the Duchess, mistakes her for the elder woman. At film’s end—when Maria returns to the salon of many entrances and exits with both her husband and Halton on her tracks—these doors suddenly become central to the plot. In one room, discovering Sir Frederick, Maria lies to him, declaring that she has just met and had a conversation with Halton’s “Angel,” attempting to dissociate herself from what now everybody knows is a very shady past. But in saying this she also challenges her husband not to go through that doorway, and thus prove to her both his love and his willingness to save her honor. He is unable to grant that request and, once more turning his back upon her, enters what has now become a maze of other possibilities. Simultaneously, through yet another door, enters Halton, clearly aware of the crisis Maria now faces. Lubitsch does not make evident whether by helping Maria to drape her furs around her neck, Halton is now claiming her as his possession or helping her to escape the situation; however, neither retreat. Sir Frederick finally returns to the room, admitting that room had been empty. But we know that it wasn’t at all vacant, since he inhabited it, and that in that room, apparently, he has finally met up with himself, recognizing his own failures as a husband. With that new knowledge, he offers Maria another possibility. He will travel on to Vienna that evening, and either she may join him for their long-planned vacation, or he shall go alone.


As he is about to exit through yet one more doorway, Maria joins him, the two now facing whatever they find behind the door together for the very first time in Lubitsch’s lovely fable. With such a witty use of space and setting, the actors do not even need to be brilliant—which frankly, none of these actors, at least this time around, is—for the camera has cleverly said everything that needs to be said.