the end
by Douglas Messerli

The Skeleton twins, Maggie (Kristen Wiig) and Milo (Bill Hader), in Craig Johnson’s want-to-be likeable 2014 film of the same name, are both facing crises: early in the film we observe the two, on opposite ends of the US, contemplating suicide. Milo attempts to go through with it, by slitting his wrists in a bathtub of hot water; Maggie is saved from an overdose of pills by a phone call reporting that Milo, having survived, lies recuperating in a hospital. Although the two have, somewhat inexplicably, not spoken to one another for ten years, she flies to his side.


If screenwriters Johnson’s and Mark Heyman’s story seems like an intriguing way to begin a film (its portrayal of damaged-for-life childish adults reminds one of a rising genre beginning, perhaps, with Zach Braff’s 2003 film Garden State and continuing through David O. Russell’s 2012 Silver Linings Playbook), it quickly grows utterly implausible, however, as its writers add a series of disasters and dreadful events which the sister and brother have had to endure. 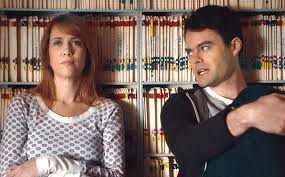 The pair are not only unhappy in love, although Maggie is slow in admitting that fact, but they are fragile survivors. Their father has committed suicide when they were just 15, and their mother is revealed to be a ditzy New Age do-gooder who would prefer to attend a spiritual retreat than her own daughter’s wedding.


Soon after, we begin to discover that Milo was the target of his school teacher’s sexual abuse in high school. Fortunately, Johnson does not make this a simple, black and white matter, suggesting that, in what is sometimes the truth, Milo not only sought out Rich, his English teacher’s (calmly but intensely performed by Ty Burrell) attentions, but enjoyed the elder’s attentions. And soon after he returns to his hometown, how under his sister’s loving protection, he seeks the man out once again. We sense the utter loneliness of Milo, who living in the wildly gay-friendly atmosphere of southern California, has apparently found no one with whom he could develop a relationship; and Milo’s ensuing pain, when Rich, understandably, is terrified that his former student has returned to cause further trouble—particularly given the facts that the former teacher, now a bookseller, remains closeted and has a 16 year-old son—helps to reveal the emptiness of the younger man’s life. The fact that Milo still seeks out his elder simply reiterates his isolation, and also helps to substantiate his feelings that, despite his visions he has had for his future, he is one of those who has peaked in high school, never able to find something later in life as meaningful. Although he has dreamt of a career in acting, he has not even been able to obtain an agent and survives by working as a waiter in a Hollywood tourist restaurant. Although the two, Rich and Milo, again begin a brief sexual relationship, Milo is soon after rejected again by Rich after he attempts to visit him at his home—to be greeted at the doorway by Rich’s son. After heavy drinking, Milo once again toys with suicidal thoughts, tossing the good luck charm of a whale (a reference to Melville’s Moby Dick, the book in which Rich had tried and failed to interest his young student) off the edge of a  building, from where he himself, a seemingly doomed beast, could any moment fall.


As the would-be healer of her beloved brother, Maggie puts up a great front, pretending to be in love with her witless, run-of-the-mill, if loveably straight-forward husband, Lance (Luke Wilson). Yet we soon observe her courting disaster with an affair with a scuba-dive teacher. And she soon reveals, after a nitrous oxide laughing-high (she works as a dental hygienist) with her brother, that her current sexual escapade is just one of many, that she has had brief affairs with other teachers (similar in their roles if not their ages to the object of her brother’s first sexual encounter) of various hobbyist interests she has taken up to get her out of the house. While Lance proudly announces when he first meets Milo, that he and Maggie attempting “to make a baby,” she now admits to Milo that she is secretly continuing to take pills to protect her from pregnancy. What’s worse, she suddenly discovers, is that she has forgotten to take a pill for one day, and may have missed her period.


Although the twins’ new-found kinship begins, understandably, as a rather rocky one, it soon becomes clear that the two can charm and uplift one another in ways that no others can, demonstrated spectacularly in a scene in which, Maggie having just discovered that she may be pregnant, Milo, to cheer her up, breaks into a lip-synched song, “You Can Count on Me,” that, with Hader’s deliciously delivered up dance steps and spins might charm even a misanthropic cynic. Like nearly all of the actors in this dark film, he is near perfect in his role.


Soon after, we get a glimpse of the twins’ childhood explorations of identity, when, for Halloween, Milo dresses as a kind of fairy princess while Maggie plays at being a cowboy. Their momentary return to the past, when they lived out their lives as beings they might like to be instead of admitting who they are, begins almost with an aura of enchantment, the duo dancing with one another in a beautifully filmed scene which invokes not only their mutual support, but their intense, implicitly incestuous connection. Twins, after all, are often intimately close: two identical twin friends of mine warned their wives that they would always be closer to one another than to their lovers; my own niece’s fraternal twins often accused one another, as small children, of stealing one another’s words.


But that very moment in this often sensitive film also represents the final coming-to-terms of their highly emotionally-fraught lives. When by accident, Maggie discovers through Milo’s cellphone that he has been seeing Rich, she grows furious, as we soon discover that it is her reporting of the incident years before that has not only ended the predatory abuse, an action that forced Rich to resign from his job. She sees it still as a duty she had to protect her brother, and now feels betrayed by what she sees now as her brother’s truly deviant behavior. The two fight, perhaps with Milo truly comprehending for the first time just how involved his sister had been in the break-up of his only fulfilling relationship. The interchange of cutting remarks ends with her suggestion that, perhaps, in his suicide attempts he had not cut deep enough!


When Lance admits to his house guest that he is fearful that he may be infertile, Milo suggests that Maggie has always been highly secretive and that, perhaps she is on some sort medication that might explain her behavior or even her inability to get pregnant. Even if only subconsciously, he is plotting what she will later call an act of “revenge.” Yet we know, no matter how innocent Lance may be, in his utter cluelessness, he is also not the right man for Maggie; and we recognize that Milo is now only doing for Maggie what she had done for him years before. Faced with Lance’s discovery of her birth-control pills, Maggie has no choice but to admit her bizarre sexual behavior to her husband, ending—as she predicted— with the end of her marriage.


Perhaps only now do we truly comprehend why these two have not communicated for ten long years! For not only have the Skeleton twins’ father and mother twisted their perceptions of life, but the siblings themselves have helped to bring down one another by destroying each other’s doomed romances. As Milo takes bus out of town, Maggie enacts her suicide by drowning, tying herself down with barbells as she jumps into the local pool.


It hardly matters that Milo, in response to her suicide note in the form of a cellphone message, quite unbelievably rushes back in time to save her just in time from drowning. She might as well have drowned; he might as well have disappeared into the California surf.  The last scene of the film shows them facing out at the audience as a smiling couple, staring at a tank of fish, a loving gift from Maggie to the fish-loving Milo, but we know they lives are spiritually over, which no amount of their mother’s attempts at “cleansing” can ever restore.


My companion Howard argues that the film ends with the simple hope that they will now each find the right companions, discover people who might be intelligent enough to deal with the dark and quirky currents of their lives.


Although I wish I could agree, I can’t envision any other future for them. They are not only too tightly intertwined as twins, alas, but are a doomed beings, destined to live out their lives with each other—despite occasional forays, perhaps, to seek out sexual fulfillment—side by side. Certainly there is no one else in this film who has revealed any of the complexity of fullness of life they both desire. Rich, as he describes himself, is a “pussy,” a man afraid even to admit his own sexual proclivities. A high school friend, whom Maggie encounters, reveals the horrors of married life with children she herself describes as “shits.” These two beings can belong only to one another; specters of the past; trapped in the skeletons of their own bodies by childhood events, they have no future. Their frozen stares into our eyes signify what the movie indicates, “The End.”


Posted by greenintegerblog at 1:30 PM