Jon Stewart (writer and director, based on the memoir Then They Came for Me by Maziar Bahari and Aimee Molloy), Rosewater / 2014

There is a great deal in Jon Stewart’s first film documentary, Rosewater, to want to like. The very fact that a noted news-casting-entertainer—recognizing his The Daily Show as the unintentional causation of a journalist’s arrest in Iran—would take out time to make a movie about that man’s experiences is news in itself, just as the print and television media have treated it. The film’s depiction of the facts surrounding Maziar Bahari’s (Gael García Bernal) coverage of the 2009 presidential election and the so-called “Green Revolution” in that country, his sudden arrestment and imprisonment (for 118 days) in Teheran’s notorious Evin Prison, and his (and the movie’s) determination to give witness to the hundreds of other lesser-known journalists formerly and currently imprisoned, make for a notable subject of humanitarian significance. 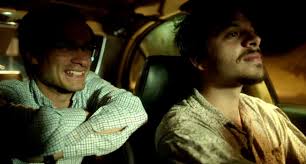 Accordingly as Stewart’s work begins with Bahari’s having to leave his beloved and pregnant wife in London for a few days of reporting, we settle back for what suggests it will be a revealing work. If Bahari, reporting for Newsweek, seems a little dissociated from his homeland, and, we soon discover, he is almost clueless about others of his quite informed generation still in Iran, who bravely defy governmental edicts, we might credit this to his focus on becoming a new father and the several years he has spent in the West. But when we soon discover that both Bahari’s father and sister were arrested and tortured by different regimes and for different reasons, we begin to wonder if Bahari isn’t just a little bit dense in the head, at least as presented by the director. In fact, we never quite get to find out who this unfortunate journalist really is.
Stewart attempts to link the son to the past, suggesting his mixed feelings about returning to his home country, by hitting the viewer over the head—plastering billboards, shop windows and others of the city’s surfaces with images from his memory. And unfortunately, this heavy-handed technique hints at further directorial missteps, replacing psychologically-induced imagery for what might have been more effectively communicated through narrative events. In fact, the whole first third of this film, when Bahari quickly picks up a taxi cab driver to become his guide, is filled with all sorts of bits of information that, if fleshed out, might have given the entire film—particularly the work’s central scenes within prison—more dimension. We want to know more about Bahari’s communist-leaning father, his beloved, politically involved sister, and his gently-enduring mother. We are fascinated by the driver (who, Bahari soon discovers, owns no taxi, only a bicycle) and his friends’ open commitment to world-wide information through what they joke is “dish university,” joyfully demonstrating a series of forbidden dish satellites hidden upon a mid-sized building roof. How did they come to be so politically savvy? Or are they merely demonstrating a braggadocio in the face of the menacing political forces in which they enmeshed? Did the younger generation truly imagine that Abmadinejad’s opponent might really be allowed to win the election? Once again, Stewart washes over the real issues with amateur gimmicks, flashing the dissident’s joyful display of their half-hidden communications center with animated maps and arrows representing emails and tweets.


One might forgive these clumsy visual displays as emanating from Stewart’s lack of experience. But, alas, his decision to take the easy route instead of the more difficult one, continues throughout much of the film. We never really do get to know Bahari, his family, or his new-found friends, and the film suffers from that lack of knowledge: why should we care so desperately for this likeable reporter, and how could he not of guessed that his activities in the city, including his comic gesture of commenting on spying activities on The Daily Show, and, most importantly, his actually photographing of an attack and murder at a local military station, would not lead to his arrest? If history has taught us anything, you do not need to have done anything illegal to be perceived as being guilty, not only in dictator-based countries, but often even in so-called democracies such as jolly-old England and the gold ole US. That such a savvy comedian such as Stewart would miss the opportunity to bring that idea home, one feels, is a loss for our times. Are we (not only Americans, but westerners far removed from the internal struggles within Iran) involved in any way with the events in this picture? Why, one wonders, did Stewart so clearly want to bring this story to the screen if he did not intend to explore its larger ramifications?
Jeff Myers, in the Orlando Weekly, asked questions very similar in his review of November 19, 2014:


Not only does the growing threat to independent journalist go
unexamined, Stewart fails to connect Iran’s behavior with our
own. It isn’t hard to recognize that Bahari’s incarceration and
enhanced interrogation echo the situation in Guantanamo Boy,
and that Ahmadinejad’s criminalization of reporters and pro-
testors has its equivalencies here. One has only to recall the
actions by police in Ferguson, Missouri, to see the connections.


Once we are locked away, with Bahari, in the prison, the movie tightens up some and explores ideas more complexly. Stewart is smart, I would argue, to present the grand inquisitor of his hero “Rosewater” (Kim Bodnia) (dubbed so because he smells of the perfume he dabs upon his nearly-always sweating carcass) as an ordinary man, trying to accomplish a mean and demeaning task within the confines of a brutal bureaucracy. Even a torturer, Stewart makes clear, has to come to his job each day ready to endure the pushes and pulls of both his emotional and physical abuses. The fact that “Rosewater” is isolated in a country that doesn’t always allow access to Western thinking (and the same might be said of so many countries in which these torturers exist) works to his disadvantage. There is something almost painfully touching about his absurd misconceptions revealed through questions such as “Who is that Anton Chekov mentioned in your Facebook profile?” “Why did you travel so many times to New Jersey?” and, most obviously, “Why did you claim to be in league with a spy on the television show?” Bahari’s reply only points out the unanswerable absurdity of the questions themselves: “Why would a spy have a television show?”
There is almost a joyful righteousness when Bahari, finally coming to perceive that instead of battling absurdity he should go with the flow, begins to spin mad tales of his addiction to massages that forces him to travel to New Jersey for such a pitch of sexual pleasure that it might possibly end in death, as well as linking that addiction to the “pornography” his inquisitor suspects exists in the many movies they have found on Bahari’s computer, including Pasolini’s Teorema. In short, Stewart is satirically competent when it comes to demonstrating the banality of evil.


But even here, at times, Stewart muddles his clever narrative with the overly clichéd visions of Bahari’s father and sister in conversation with the son and brother. In literalizing fantasy in a world of fantastical accusations the director almost aligns himself with the purported enemy. And, while the look Stewart has created of the prison—through a series of white-washed, fairly clean warrens for isolation—may be accurate, it makes it difficult for us to believe in the horrors the prisoner is undergoing. Surely, isolation (blindfolded for long periods of time) for nearly four months in any quarters might drive anyone mad, and the terror of feeling forgotten and abandoned—effectively indoctrinated by the prison officials—helps to break down even the most intellectually fortified being. When he does admit his guilt, Bahari’s bland recitation of force-fed statements is almost meaningless to his captors. And when he accidentally is described as “Mr. Hilary Clinton” by a guard, the prisoner suddenly perceives his case is not only unforgotten but has been internationally discussed.
These moments represent highs in an otherwise rather ineffective recounting of events, however. As overwrought and melodramatic as movies such as Midnight Express are, we come to better understand the psychological effects of prison life than in Stewart’s wryer and drier presentation.
I’m willing to give Stewart the benefit of his inexperience; perhaps, if he desires to become one, he may someday become an intelligent and effective director. But I was disappointed that he botched so much of this potentially revelatory, even important, document.


Reprinted from World Cinema Review (December 2014).
Posted by greenintegerblog at 10:08 AM 1 comment: