Martin Goldsmith (screenplay, based on his fiction), Edgar G. Ullmer (director) Detour / 1945
Coincidence is the heart of so many stories. Who’d have guessed the man who ticks off Oedipus in a bad case of road rage happens to be his missing pop; and the cute dame he meets and hooks up with after turns out to be his mom?  Wouldn’t you know that Romeo would just have to fall for the rival gang leader’s sis? 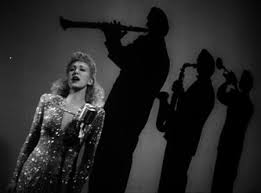 For poor Al Roberts (Tom Neal) it’s the same thing all over again. Once he gets up the courage to quit tinkling his ivories and split for California where his singing honey, Sue Harvey (Claudia Drake), is getting awfully hungry, you just know he’d have the bad luck to try to hitch a ride with a blabbermouth weirdo like Charles Haskell, Jr. (Edmund McDonald)—scratches all over his fingers and a crooked scar running down his flabby bicep—who’d conk out on him the moment he puts his heel to the brake. Just open the door and the slob falls out head straight to asphalt. What’s he gonna do? Police would never believe this one! Al has to steal the wheel, man’s wallet, and I.D. too. Can’t leave anything ‘cept the stiff laying round. Better get out of there fast!


Sure enough, stop for just a little radiator water and he’s doomed. Picked up the wrong bimbo this time for sure! Vera (Ann Savage) see says, and before he can even look over her statistics, she all’s over him, knows Al from every angle, even ones in which he’s never bent. See, she just happens to be the gal who gave those scratches to old man Haskell, so she knows for sure it ain’t this fool’s car, and is convinced before Al can spit out his gum that he’s done him in just get his hands on the wad of cash the old geezer flashed in everyone’s face. His bad luck. That’s for certain.


Vera is the kind a girl knows more tricks than the years she’s been on the planet. Before they even get cross city line into L.A. she’s got the guy tied to her like a ball to a chain; pretends to be married and determines to sell the soupcan with her as its major benefactress.
Okay. Okay. Al’s ready to go along with anything. Just as long as he can pick up on his sticks to play another day, find his baby and make it all up. But Vera, she’s some smart cookie. Suddenly she’s got another plot going on behind that half-pretty face. Before they can even ditch the wheels she’s driving down to meet Haskell’s rich dead daddy where’s Al’s supposed to playact his long lost son upon whom Pop’s ready and willing to dump his will.
No, Al won’t go along with that. Enough is enough. Whatcha gonna do though with Vera on a toot ready to call up the cops every time he says “No way!”
What’s the choice? Locked up. That bitch Vera taking the phone in the other room with her falling dead drunk under the sheets, cord wrapped round her waist.


Seeing that cord as the only thing still connecting her to him, Al thinks it wouldn’t hurt to pull on it just a little bit, like a drowning man pulling at the strings of his fate. Like an umbilical chord a newborn’s just gotta break if he’s going to take his good breath and scream out, “I’m here”!


Nobody told him that she’d wrapped like a noose round her neck.

No wonder he’s edgy. Sitting in a dingy diner getting ready now to get nabbed by the cops. He’s gonna die, sure as supper, for something he never did. Or at least  for something he didn’t know he had done. That’s what they all say!
“Comeon coppers, come and get me,” he can’t help himself crying out. But do they? Will they really? That’s a question to which there is no answer. Maybe he isn’t where he thought he was. Or just maybe he’s gone where he thought he isn’t. I mean, it’s all so simple. Yet it’s all so dark and confusing, kinda like a mirror in which when you look into you can’t get out. You have to laugh, it’s so bad. It’s so good it hurts.
That’s what I mean about coincidence?