Ben Hecht (screenplay, based on the play by Noel Coward), Ernst Lubitsch (director) Design for Living / 1933
One wants so much to love Ernst Lubitsch’s nod to Noel Coward’s Design for Living of 1933! No matter that Gary Cooper already displays too many of the Capraesque ticks of his later acting career—the “aw shucks, disturbingly-innocent American, all too ready to slug-it-out with anyone who disagrees with him, chip-on-the-shoulder attitude”-school of acting that he eventually dominated; for a moment, I was a afraid he might even take out his harmonica! I hate the type but enjoy the actor. Frederic March is a first-rate stage actor often used miserably by filmmakers. And Miriam Hopkins, a precursor of the breezy slightly addlepated, good hearted dame that Carole Lombard would soon perfect, found her voice in this and other films of the period. 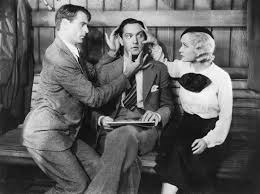 Ernst Lubitsch was the absolute master of pre-code adult sex comedies—representing some of the most mature filmmaking about the relationships between men and women and anyone in between of the American cinema. And Noel Coward…well Coward simply speaks for himself: he was urbane and sophisticated comedy incarnate. The limited run with Alfred Lunt, Lynn Fontanne, and himself of this play at New York’s Ethel Barrymore Theatre caused near-riots as audiences rushed to the theater to see the play in the last weeks of its run.


On the other side, there’s the screenwriter, Ben Hecht. One of the most talented of all of film writers in screen history, Hecht knew the American psyche better than nearly anyone in his day. He could seemingly do anything: mad-cap comedy (Twentieth Century, Monkey Business), regular comedy (His Girl Friday, Nothing Sacred), drama (Notorious), and even high melodrama (Wuthering Heights). What he couldn’t do and wouldn’t do was English drawing-room patter. And that’s where Design for Living somehow lost its bounce.


Although Hecht, despite what might have been his deep-down druthers, kept the basic structure of Coward’s witty ménage-a-tois, in converting it a story of three Americans on the loose in Paris instead of three jaded British artists, everything in the work—except for the fact that the three major characters in this pre-code work actually do have sex, the two males, at least, copulating with their female friend—is transformed from a spritely series of quick-witted lines, with the characters, like moths, “colliding constantly and bruising each other’s wings” (as Coward put it), into a bell-ringing (if only the bell of an now-obsolete typewriter) pin-ball machine, each figure taking his turn to intercept, out-maneuver, and cheat against the others. If Coward’s males might be imagined to be attracted to one another as much as to the lovely woman with whom they share their small flat, these clumsy Americans are just “long-time friends” who—reminding one all too much of the later Bing Crosby and Bob Hope duo—attempt to maintain their platonic partnership* while personally winning over the woman they share, which means, simply put, getting her into bed: the fact of which demands that she immediately marry the one her beds her first!
While abandoning the comedy’s sexual insouciance, Hecht does allow his heroine to become a proto-feminist figure, delighted by the fact that she, like most men before her, has suddenly found herself in the position of choosing between her suitors, a bit like choosing between two appealing hats. But in order to gain that transcendence she is forced, given the writer’s American moral compunctions, to become a kind of mother to them both, while stimulating them to achieve new heights in their careers.
Long passages, accordingly, are required in which to explain the changes in their lives. In what might be described as the first act, the Frederic March character is sent off to England to become famous, while Cooper establishes his territory. March’s second act return, finally—and far too late to save the comedy’s pacing—changes everything. The result, act three, is a completely unbelievable “third marriage” of the title character, Gilda, to the career-centered (read intractably male-centered) advertising executive played to type by Edward Everett Horton, an advertising executive whose central relationships are cast in cement, made literal by his attempt to curry favor with a major producer of the substance.
The film slightly redeems itself when the two competitive “roommates,” after drinking themselves into a sentimental tizzy, realize that the original “design for living”— the three for all and all for one—was better than living without her, and show up in matching tuxedos to a high-class dinner, popping up like dueling-puppets from behind her dressing screen to easily win her back.


It’s fascinating that in Coward’s comedy the trio ends the play in a ridiculous fit of laughter, rejoicing, perhaps, in the absurdity of their irreconcilable bisexual and heterosexual urges. In the Lubitsch-Hecht Americanized version, they, once more, come to “a gentleman’s agreement,” a temporary lacuna in which they agree to have no sex. Instead of laugher, Hecht poises his male figures, a bit like a traditional Western, in another standoff. And, we all know by this time where that will end. Fortunately, we know their history; these men may have come to such an agreement, but, as Gilda readily admits, “I’m no gentleman.” The question remains, obviously, whether these temporary “gentlemen” can stop being stereotypical American males long enough to become “gentle” men able to embrace whatever sexual realities they might face.

*On the other hand, one must admit that seldom has there been so much evidence of male-on-male touching as in Lubitsch’s direction of this film. There’s hardly a moment when these two male figures can keep their hands off one another.


Posted by greenintegerblog at 1:58 PM