a man of secrets
by Douglas Messerli

Graham Moore (screenplay, based on the biography Alan Turing: The Enigma by Andrew Hodges),
Moren Tyldum (director) The Imitation Game  / 2014

Given the scientific complexity of what Alan Turing was attempting to accomplish, his personal hidden identity (he was gay in a time when the United Kingdom still criminalized homosexual behavior), and the governmentally-enforced hidden identities he would be asked to embrace, along with his apparent inability to often comprehend simple human conversations as well the difficulty he had in expressing himself, my title for this essay is surely an obvious one; the moment I had chosen it, moreover, I read a New Yorker essay on Turning and a biography written about him by David Leavitt (“Code-Breaker: The Life and Death of Alan Turing by Jim Holt) that described him precisely as I had: “A man of secrets.” And it precisely because of these layers of secretiveness that I begin this essay, I must admit, with somewhat of a loss for words. How to enter upon the subject of Alan Turing without first providing a complete history of the man, which, unfortunately the movie I have just seen, The Imitation Game  only fragmentarily achieves? 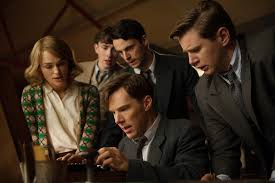 As A. O. Scott in The New York Times review suggests, the life of Turing, along with its interconnections with World War II deep secret activities along with the shifting socio-political issues of the period “is a lot for a single movie to take in,” requiring a script that “prunes and compresses a narrative” by Andrew Hodges upon which it was based. Despite the often intelligently written Graham Moore script (which topped the Black List for best unproduced Hollywood scripts in 2011), the story played out in this rather traditionally told and even more conservatively filmed bio-pic is, at very best, murky, a work that often does not bother to explain the images it projects upon the screen. For example, it would have been nice to know that when we see the central character, Turing (Benedict Cumberbatch), running as if he had just come from a screen test for Chariots of Fire, that the great mathematician had been a winning long-run marathoner in his youth. It might have been of great significance to have known that the cyanide we see him dangerously scooping up after the robbery and destruction of his bedroom-office, was the same substance he used, through injection into an apple, for his suicide in June of 1954. Although the film is framed, in part, around his arrest for and confession of indecent homosexual behavior, it might have helped us, at least, to imagine how the individual the film depicts as having little facility in communicating with his own species, could have lured another man into his bed.
Although it may have appeared to be irrelevant to the central story the film presents, it would have been fascinating, surely, to indicate that after Turing had accomplished the breaking of the German Enigma Machine code at Bletchley Park, he traveled to the United States where he worked for Bell-Labs to fabricate a similar computer (“Bombe,” as it was called) and, perhaps even more important, helped to develop a secure speech device (Delilah) which would become the basis of electronic enciphering of speech in later telephone systems and radios, which today as been applied to protect computer systems—and surely in order to break such codes by hackers and the NSA.


In his absence, Turing’s apparent nemesis in the film, Hugh Alexander (Matthew Goode), took over as head of the activities in the now-renowned Hut 8, and upon his return, Turing gladly worked under him as a consultant for cryptanalysis, having little interest in the day-to-day operations of the project. Indeed, Holt argues that, despite Turing’s odd ways, he was quite beloved by his colleagues, a reality one might not have imagined until the very end of Tyldum’s work.


It comes as no surprise, surely, that Turing’s real relationship with fellow cryptologist and puzzle-solver, Joan Clarke (Keira Knighhtley)—in truth, argues Turing’s niece, a rather plain woman; but, then, Turning was no Cumberbatch when it came to looks—was not nearly as intense and ongoing as it is presented in the movie. Although he did, in fact, offer to marry her, and, in backing out, admitted his homosexuality, the relationship between the two, as opposed to the way this film portrays it, involved little romance. Such a fabrication, we recognize is to be forgiven for such an old-fashioned film, which requires, obviously, a juicy feminine role.


Since I’ll be writing about the Hodges biography in a following essay, I won’t further parse distinctions between truth and fiction. My point is simply that, in the many ways, Tyldum’s and Moore’s film is itself a work of “secrets,” a flirtatious series of half-truths that steers its narrative toward a kind of simplification of events that results in a lovely veneer—the film is often beautiful to look at and appealing to the ear (with a plush orchestral score of the always pleasing Alexandre Desplat)—that seldom allows us the possibility of going beyond the surface of things.
When a movie posits its entire psychological evidence for the behavior of its central character upon a childhood incident, in this case the death of Turing’s beloved friend, Christopher—after whom he names his equally beloved machine—we know we’re never going to get to the heart of what makes the hero tick. If Turing was a “man of secrets,” the movie does very little to help reveal what might lie underneath the layers of self-, social-, and political-deceit. Instead of shellacking over these real-life events, a better film might, a bit like an art conservator, have peeled away some of the varnish already overlaying the “picture,’  exposing the real thing—the actual man and events behind his life.
There are moments, clearly, when the film does attempt this. Playing what Turing describes as “a game of judgment” (in reality what was called “the Turing Test”) to determine whether the being with which he was communicating was a human or an “intelligent” machine (a remarkable game of logic that reminds one, a bit, like the test used in Ridley Scott’s Blade Runner to determine whether a being was a “real” human being or a manufactured one) the film’s hero begs his interlocutor to judge him: “Am I a human being or a machine, a war hero or a war criminal.” The poor detective, who has simply imagined Turning to be a Soviet spy, admits his incapability.
As the movie would have it, Turing is all of these. If he is a human, he also a monster (“a living admonishment or warning”) in his inability to fully feel what humans do; if he has saved the lives of thousands in having been able to decode through his early computer the German Enigma machine, shortening the duration of World War II—according to Winston Churchill, by as many as four years—in his cold-hearted, statistically-based calculations concerning which war-time encounters with German submarines and bombers, allowing him to ignore or circumvent them, he had also to be a kind of cold-hearted criminal. Looking the other way, in numerous instances, from the certain death and destruction of German attacks in order to keep the secret that they had been able to break the German codes, Turing and his associates were forced to play the role of gods, making judgments over the fates of their fellow beings. And the hubris that came from that play-acting may certainly have led them to imagine they alone had won the war in their seemingly invisible hut.


If we choose to judge Turing guilty, we realize we must also equally judge the government for which he worked and the society which refused men like Turing to even take another man into his arms to kiss and share a moment of sexual bliss. If Turing was a secretive being, so too was the government who for decades refused to even admit Turing’s achievements, as well as the British law which refused to admit his humanity. If the film fails to provide a clear portrait of the man at the center of the events it portrays, so too did the world in which Turing exist refuse to allow him open access to normal life.
With regard to Turing’s sad existence, I like to think of the metaphor that author David Levitt uses in his biography on Turing, The Man Who Knew Too Much—even though I cannot fully accept it as fact. One of Turing’s favorite scenes from movies, so we are told, was the one in which Disney’s Snow White is given the poison apple by the witch. Levitt suggests that in his suicide the great mathematician knowingly used the story as an imaginative image in destroying himself. In the story, if you recall, Snow White does not die, but falls into a deep sleep, to be awakened, like Sleeping Beauty, by a Prince, in a future time, through the miracle of a kiss. It’s nice to think that Turing, exhausted by the burdens of all the secrets which had already psychologically buried him, imagined that he might one day be awakened into a world that accepted him for what he was: a brilliant thinker who helped to save the Allies in World War II and in developing his “Turing machine” created what we today describe as the computer, a genius who also led the way for new discoveries in the fields of artificial thinking and morphogenesis, and, finally, a gay man who “in being what no one thought anything of did things that no one could imagine.”
Any work of art that helps us to rethink and reimagine the life of such a remarkable man is worthy of our attention. And one has to give credit to The Imitation Game for attempting so valiantly to recognize the achievements of its hero. But unfortunately this film covers up that same figure in yet more secrets rather than working to reveal or attempting to solve them.